Warning: count(): Parameter must be an array or an object that implements Countable in /homepages/45/d96662078/htdocs/clickandbuilds/TheBackseatDriverReviews/wp-includes/post-template.php on line 316
↓
Home→Horror→Weekend Movies: Five Reasons to Watch The Conjuring

Oh, James Wan. Thank you so, so much for 2013’s The Conjuring. I didn’t catch this one in the theatre when it first came out, but I did manage the second-best thing to a dark theatre with a group of strangers: solo on my couch, on a cold, stormy night, with my children asleep upstairs and a quiet house. Let me tell you, sleep did not come easy that night, as my dresser is across from my bed. In the spirit of the month of horror, here are five reasons to watch it this weekend, whether it’s a re-watch or a first-time viewing.

Some films subscribe to the notion that it’s not scary unless if it’s graphic. While I don’t mind gore, after a certain point, if you’re just trying to gross me out with copious amount of corn syrup and yogurt, well, you’re a one-trick pony and it’s boring. I may be grossed out, but that’s about it. If you can scare me with clever cuts and tricks of the light, then that to me demonstrates skill. I’d rather have that than all the anatomically-accurate severed heads you can muster.

There is something so marvellous about this actress that causes me to gush. She can do any emotion, and she has the ability to break hearts in one simple sentence (case in point: her character in Six Feet Under, Lisa, telling Claire that she’ll look after her aborted baby in the afterlife. Gets me every time.). I think half of it is that wonderful voice she has – I could curl up and listen to her recite any oral tradition poem for hours. It doesn’t hurt that I think she’s pretty. All of those things combine in this role to make her a believable woman who is going through a tough time. Your eyes want to follow her. It’s another reason why I adore her. 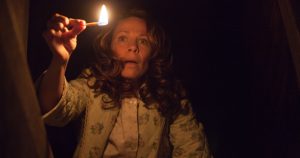 Love her so much.

There are a few scenes in this where the Warrens (Patrick Wilson and Vera Farmiga) attempt to explain supernatural instances. Regardless of what you think of the real-life Warrens, it’s refreshing to see two experts telling someone that their ghost is actually air trapped in a pipe; it’s not a racket in this instance used to grab money. That rubbed me the right way; it made the characters more believable.

Feel free to disagree with me, but there is serious evil in the world. It’s in everything from nasty words to judgment to refusal to help a suffering person. The spirit in this is evil – there’s no attempting to humanize her. She’s nasty, she wants to hurt others without provocation, and she needs to go down. It’s nice every so often to see that there is no redemption for your big bad wolf – sometimes, we need that fairy tale to remind us that there is evil without a conscience in the world. 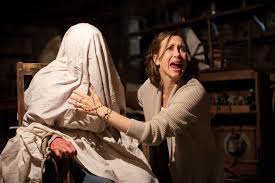 Give yourself a treat and get nice and scared with this one this weekend.