Warning: count(): Parameter must be an array or an object that implements Countable in /homepages/45/d96662078/htdocs/clickandbuilds/TheBackseatDriverReviews/wp-includes/post-template.php on line 316
↓
Home→Documentary→Weekend Movies: Five Reasons to Watch The King of Kong: A Fistful of Quarters (2007)

Here’s the deal: I love video games. Can I tell you what make and model jock strap Mario wears in Super Mario Galaxy? Nope – I’m just in it to have fun and blow off some steam at the end of the day. There are people that take it rather seriously. So seriously, in fact, that they join gaming competitions and make a go of being declared world champion. Lucky for us, Seth Gordon gave us a peek into the world of competitive arcade gaming with his 2007 documentary The King of Kong: A Fistful of Quarters. It covers the standoff between champion Billy Mitchell and challenger Steve Wiebe for high score of Donkey Kong. Here are five reasons to watch it this weekend. 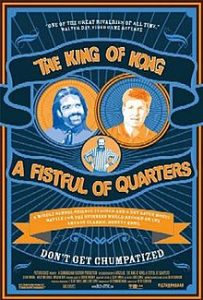 #1 – Billy Mitchell is… something

Mitchell, the reigning champ at the time of the film’s shooting, is regarded by all interviewed as a legend. Mitchell is every bit the part, with his flowing hair and grandiose speeches. The self-importance is, in a word, staggering. Bonus: he was the basis of the character Eddie Plant in Pixels (2015), a full two years before Mitchell lost his title for cheating. Oh yeah – watch this documentary bearing in mind that Mitchell lost the title.

#2 – Nicole Wiebe is not here for your shit

Challenger Steve has a wife at home, Nicole, as well as two kids. Nicole clearly loves her husband, but you can tell watching this documentary that she’s annoyed with the extreme focus on a video game. Yes, Steve had gotten laid off and was feeling low, but this woman was clearly holding the household together while he was playing games, and a few biting remarks show some cracks in her unwavering support (not to mention the pleading of his kids. It’s heartbreaking). It reminds me a bit of a couple I once knew: wife worked/raised the kids, husband had health problems, and so he stayed home and gamed. She ran the household/children while he was posting gaming videos; the level of frustration in this relationship was uncomfortable to watch on so many levels (for the record, if she had snapped, I don’t think a jury would have convicted). With the display of these guys pretending to be masters of the universe, we get a woman who’s trying to be the rock at home. Nicole’s the real hero here. 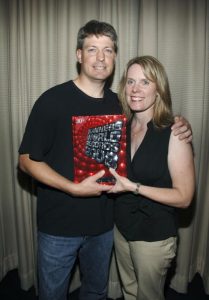 Nicole is the real MVP.

#3 – There’s a real-life application for mathematics!

Remember how most of us rolled our eyes during math class and bemoaned that we’d never use this information? In this film, you see Steve making calculations to better unlock how to approach a game. While this probably isn’t the example that your math teacher had in mind, it’s pretty cool to see the application of math toward a goal. Proof that not everything in high school is useless filler.

The soundtrack of this documentary is so 1980s-driven it’s glorious. For the first 20 minutes, you’re grooving along to recognizable hits as “You’re the Best” from The Karate Kid (1984) to Survivor’s “Eye of the Tiger”. As a bonus, it also incorporates Grieg’s “In the Hall of the Mountain King,” which is packed with such emotion that you can’t help but associate it with mischief and antics (it’s also a personal favorite of mine). The musical choices really add to the documentary. 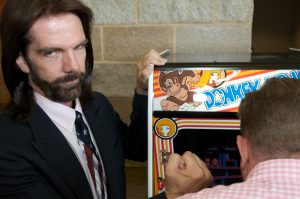 #5 – Peering into the world of gamers

One running motif of this documentary: these gamers really, truly do feel that they are athletes. They speak of training, devotion and the spoils of championship, much like a basketball or baseball player. I’m honestly a little bewildered at the amount of ass they think a well-played game of Asteroid can carry, but… I’m not about to pop dreams today. You do you.

The King of Kong: A Fistful of Quarters is available on YouTube.