Warning: count(): Parameter must be an array or an object that implements Countable in /homepages/45/d96662078/htdocs/clickandbuilds/TheBackseatDriverReviews/wp-includes/post-template.php on line 316
↓
Home→Horror→Weekend Movies: Five Reasons to Watch The Ritual

You know what makes me happy? Being safe and warm in my living room, bundled under a blanket, where nothing can get me. I am an indoor kid, and I am proud of that fact. That doesn’t stop me from enjoying movies about peril in the great outdoors, though. Such is the case with The Ritual, a 2017 offering from David Bruckner. It centers on a quartet of friends trying to find their way back to civilization in the Swedish wilderness with a supernatural entity stalking them. Here are five reasons to watch it this weekend. 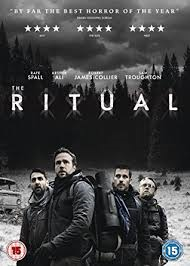 #1 – A massive dose of guilt complex

I grew up Roman Catholic, which means that you can guilt trip me for shit that’s not even my fault. Really, I will feel guilty about the dumbest damn things. So when I say that there’s a huge guilt complex going on in this film, if you’re anything like me, it will hit hard. Luke (Rafe Spall) carries a lot of guilt around his involvement in the death of a friend, when really, he had a terrified reaction. For anyone that gets anxious and suffers from a guilt complex, you’ll see a lot of yourself there.

Edgar Wright deserves a cookie for casting Spall alongside Paddy Considine in Hot Fuzz, which seems unrelated, but I promise we’ll get to the point in a minute. While I love Considine quite a bit, I’ll be damned if I don’t confuse him with Spall more times than I care to admit. But here’s the thing – it’s for the best reasons. Both have a quiet calm and can carry a scene without trying too hard to act. I find them both compelling to watch – they’re more Everyman than a lot of the mainstream actors, like the Chris Evans or Brad Pitt types (easier on the eyes in my opinion too). There’s familiar vulnerability there. If you’re going to get sucked in going, “Oh, I know that guy!” it’s not entirely bad to get confused with Considine. There are far worse people for whom you can be mistaken.

“Erin, let’s go camping!” are four words I dread hearing after watching movies like this. This film goes for the Something Is Stalking Them In the Woods angle, and it does so quite well. You feel the tension of a group of men out on a trip that turns into something watching them, then marking them, then picking them off one by one. I don’t care if it’s human or not: the thought of something circling you for the kill is scary. It makes me want to stay indoors. Yeah, I’m an indoor kid, but I’m an indoor kid that’s not being stalked by a supernatural creature that wants to gut me. Come at me, bruh.

Between the PTSD flashbacks interspersed with the woodland setting and the group of men wondering what the hell is going on, this film is enough to make you wonder what’s after them and if it’s human. That’s a scary concept, because it takes a very real situation and starts twisting it to become supernatural. You can make the case for a human predator or something otherworldly; it works both ways, and they’re both bad options because you’re watching innocent people die. That means it can happen to you. Which makes it that much creepier. 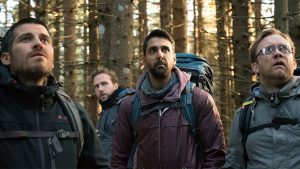 The quickest way to get me to like your movie is to do something different with the lighting, or at least be willing to dimly light your film. Between the overhead florescent of the indoor parts and the darkness of the woods at night, it resembles a bit of the hot and cold flashes of an illness that leaves you in a state of delirium. We all know that hellish feeling wherein we can’t figure out if we’re hot or cold, or if the room is too bright. I swear, the lighting mimics this feeling. Likewise, the film knows when to cast light and shadows from under the chin, giving it a campfire feel. It’s clever and it takes a moment to realize that impact, but it’s there and it’s nifty.

The Ritual is available on Netflix.