Warning: count(): Parameter must be an array or an object that implements Countable in /homepages/45/d96662078/htdocs/clickandbuilds/TheBackseatDriverReviews/wp-includes/post-template.php on line 316
↓
Home→Crime→Cash on Demand: Wealth, Race and Privilege in Don’t Breathe

I remember going to watch Fede Álvarez’s Don’t Breathe when it came out in 2016. I wanted to like it; really, I wanted to like it. I like Álvarez, I like the quality of work that Jane Levy puts out, and it even had Dylan Minnette (I now scream, “You in danger, girl!” ala Ghost whenever I see him because he’s getting to the point of dying in every horror film he touches. #saveDylan ). For Christ’s sake, it’s a Sam Raimi/Rob Tapert collaboration – I should be tripping all over myself to praise this film. However, I had some major issues with it. I’m not talking about Rocky (Jane Levy) dangling in the impregnation dungeon – that, I felt, was one of the most tense points in recent cinema history, and it was well-done. I’m talking about the fact that the entire scenario of The Blind Man (Stephen Lang) kidnapping the wealthy Cindy (Franciska Törőcsik) completely tunes out the realities of financial and racial privilege. Hang on, because this is about to get as uncomfortable as Rocky in that harness with a hole in her pants and a baster close by. 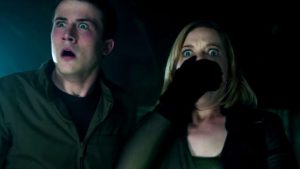 Sit down, kids. It’s going to be a doozy.

Let’s start with the financial aspect, shall we? In his grand exposition, The Blind Man – his name is listed as Norman in various credits, so we’re going to call him Norm for the purposes of this article – explains to Rocky that Cindy was the person who ran over and killed his beloved daughter. Norm tried to pursue justice, but found that Cindy was able to retain the services of one of the better attorneys in history to help get her out of trouble. The unspoken piece here: you’ve got to be able to afford a damn good lawyer in order to get off of drunk driving murder charges of a child, and then have money to pay off the grieving parents to the tune of a cool million. Norm bitterly utters, “She got off because rich girls don’t go to prison.” So how did he retaliate? He kidnapped her, dragged her into the basement, and impregnated her with the help of a handy harness and a turkey baster because he felt that she owed him a child to make up for the one she killed. We’re not going to attack Norm’s motives today (not today, Satan); we’re going to look at how this scenario would have played out in the real world. Logistically, he must have had help in obtaining Cindy. A blind man of advancing years hunting down a wealthy young woman and bringing her back to his home? How did he get his hands on her? Who did he employ, and how were they so tight-lipped? And what on Earth were the police doing that they couldn’t put two and two together that maybe the father of a young murder victim had something to do with the disappearance of the woman who killed said child? He should have been at the top of that investigation list, especially with a pay out that large. If Cindy was rich enough to beat a murder wrap, then she was rich enough to be of interest when she disappeared. And if you think for a hot shit minute that the cops wouldn’t go looking for the child of a wealthy couple, well, you obviously underestimate how far connections will cause a police force to put the squeeze on someone. Someone would have been looking for Cindy, as much as we don’t want to see that. She was a rich girl who would have been missed, and all stops would have been pulled to bring the pretty girl home. Her wealth grants her this aspect: people will help to bring her home not because she is somehow morally worthy, but because she has the means to do so. 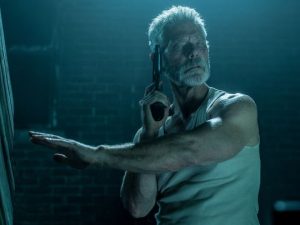 HOW DID HE DO THIS?!

Now for the second aspect, which is going to get even more uncomfortable real fast: Cindy wasn’t just rich, she was young, female, rich and white. Here’s the truth that a lot of activists have been screaming about this year: black and Latina women are not as heavily investigated when they go missing because the assumption is that they’ve run away. There was a whole storm over this in Washington, D.C. this past year over that, and rightfully so – if you go missing, someone should be out looking for you because you matter, regardless of your skin color, period, end of story. It’s beyond sad that I even have to type that, but if you pretend that the reality of the situation is not this, then you live in a fantasy world. Back to the film though: so where does this uncomfortable fact about abduction leave us? Point blank, Cindy is rich and white, yet this film treats her like her case would have gone to the bottom of the pile. Don’t Breathe treats Cindy as an inner-city woman of color because no one is looking for her. We have to find out via verbal exposition who she is, and we’re left to wonder why no one is looking for her. It’s not believable to think that Cindy is just some random woman who went out clubbing and is most likely shacked up with a boyfriend in Vegas; no one would think that she just ran away to Coachella and got lost on the way home, no biggie. There are no news sound bites and missing posters for her. Cindy is a complete surprise when Rocky and Alex (Minnette) find her in the basement; they don’t recognize her, which means her disappearance isn’t common knowledge – she’s just another statistic of missing young women. It’s as though she wandered away and no one cared enough to report her missing. And that’s simply not consistent with the way the press handles young white women who go missing. Don’t believe me? Head on over to People Magazine’s website. I’ll wait. 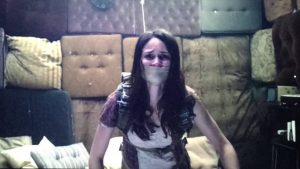 Someone would have been looking for her.

The big problem of this scenario is that it treats Cindy with a series of contradictions when in fact Cindy’s circumstances are the definition of privilege. She’s able to buy her way out of trouble because she’s wealthy young woman: she has the means to escape social responsibility, which is a damning insult to the rich. It’s stating that she’s not responsible for her actions because she has deep pockets, which, frankly, is pretty true (and depressing as fuck) if you turn on the news. This is the part most of us working slobs can get on board with: we see people that write a check and make trouble go away, and it angers us because it means the justice system doesn’t apply to those who can afford the escape hatch. This part of the plot – the rich girl who kills and has mommy and daddy make it go away – makes sense to us because it’s real; we see it. Cindy gets to eat her steak at the end of a long day of drunkenly mowing down elementary students, and she doesn’t have to go to jail. We know that this truth is out there, and we know that when you’re wealthy, exceptional attention is given to your wants and needs. But that’s where the contradiction comes in: no one is out looking for her. Cindy is treated as just another woman who has disappeared, no better than any other woman, and this is simply not true in the world in which we currently live. Intersectional feminism and justice have not spread to the point that this film leverages. Mark my words, someone should have been goddamned invested in making sure Cindy came home, and they wouldn’t have had to travel very far to find her – someone would have shelled out a massive amount of money for a search campaign, her face would have been all over the news, someone would have left a trail, and she’d be easy to locate. There’s no detective character that’s got his eye on Norm and his fortress of boobytraps, private or publicly employed. As much as we hate to admit it, Cindy would have been home safe inside of a week without the dungeon bun in the oven, yet this film asks us to believe otherwise.

Would. Never. Have. Gotten. This. Far.

The simple fact is that you can’t borrow from different pieces of social commentary to suit your needs by hoping that we don’t string together the inconsistencies. Cindy was the perfect cocktail of the missing damsel in distress: she was rich, she was pretty, she was white, and she had some skeletons that would have given the police or private detective agency more than enough leads to perform a stake out. While Don’t Breathe has some moments of great tension and fear, this plot is where it fully unraveled for me. I can buy that the victim of the robbery is not a saint. However, I can’t get on board with the idea that every woman gets avenged or abandoned in the same social sense because it denies the existence of aspects of privilege that have yet to be thoroughly addressed. We’d be naïve to believe that they have.

If you’d like to go one better, visit the Black and Missing Foundation to make a donation.