Warning: count(): Parameter must be an array or an object that implements Countable in /homepages/45/d96662078/htdocs/clickandbuilds/TheBackseatDriverReviews/wp-includes/post-template.php on line 316
↓
Home→Action→Weekend Movies: Five Reasons to Watch Wanted (2008)

One of the best things about action films: they allow lazy people like yours truly to sit on the sidelines and get all riled up without having to do anything. Is that a lazy statement? Yeah, but you know that more than half of you relate to it (there’s no shame or attack in that statement – you’re in good company). Which is why we want to get the blood pumping this weekend by watching something with cool action sequences, blood and car chases. Enter Wanted (2008), a film about a man named Wesley Gibson (James McAvoy) who finds out that he’s part of an order of elite assassins (as one casually finds out at the pharmacy). It’s based on a graphic novel by Mark Millar. Here are five reasons to watch it this weekend. 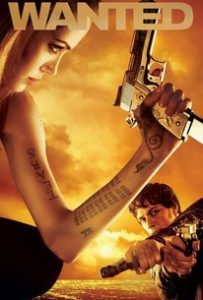 Timur Bekmambetov – he of Nightwatch (2004) and Daywatch (2006) fame – was a really big deal over in Russia, and got to try his luck in America. This film was set to be his first English-language movie, and as the prospect was a bit daunting, he asked nicely if he could have a familiar face onboard. Enter Konstantin Khabensky, the star of his Russian films. Khabensky learned all of his lines phonetically, as he didn’t speak English all that well. The resulting impact is a broad smile for those of us who followed Bekmambetov’s Russian films: Khabensky gives great performances for him, and honestly, it’s always nice to have someone you love working with by your side when you try something new and scary.

Raise your hand if you forgot that Chris Pratt was in this. I know I certainly did. It’s a throwback to his Andy Dwyer years, where there’s a bit more Pratt than, say, Guardians of the Galaxy. Personally, I like my Pratt a little heavier and a bit of a sleaze. He plays the part well, and while we get glimpses of it when he’s Peter Quill, it’s not as unabashedly asshole-ish in that role as he is here. I admit that I want to see Pratt take on more roles like this when he’s done being the action hero. He has a knack for it. 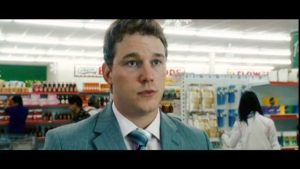 I love to hate you.

As a woman, I can tell you that I apologize way too damn much in my life. On top of that, there’s another part of my upbringing: religious guilt that results in constant apology. I’ve said before that growing up Roman Catholic left me with the ability to be guilted into apologizing for anything. Seriously, I will apologize for shit that’s not my fault, that happened ages before I was born (sorry for the Norman invasion, peeps). I therefore identify with Wesley way more than I should because I’m forever uttering, “I’m sorry.” If you’re like this as well, you’ll find the character incredibly relatable.

There is no version of La Jolie I prefer more than Cocky Action Hero Angelina. She had that quality in Lara Croft: Tomb Raider (2001), but it’s far more feminine and vulnerable at times. Ditto with Mr. and Mrs. Smith (2005). This film doesn’t focus so much on her beauty (okay, there’s one gratuitous scene) as it does on her being a total badass. I like that version because she’s proven time and again in her personal life that she is one – it takes a lot to go public with preventative medical treatment that can change how people view you as a woman, and it takes just as much to travel to war-torn countries and hold a refugee. Plus, this film shot while she was working through grief – I mean, I can’t accomplish half of what she does here, and it’s physically demanding. Call me a fan. 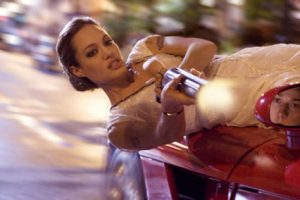 To quote Wayne Campbell, God I love this woman.

There’s something oddly appealing about the idea that someone could pluck you from obscurity and place you into a life of danger and excitement. Given, when you think about it, the life of an assassin probably isn’t where you want to be, but deep down… we all want someone to tell us that we’re not ordinary. We want there to be a reason why we’re weird. We want the power when we feel like the cards are stacked against us. This film is a nice little escape from that feeling.

Wanted is available for streaming on Netflix.