Warning: count(): Parameter must be an array or an object that implements Countable in /homepages/45/d96662078/htdocs/clickandbuilds/TheBackseatDriverReviews/wp-includes/post-template.php on line 316
↓
Home→Gender→The End Is Nigh: Masters of Horror: The Screwfly Solution (2006)

Showtime’s Masters of Horror series has the distinction of being both an odd let down and a curiously effective program. On one hand, I was completely underwhelmed by quite a few of the episodes, such as Chocolate, Sick Girl, Family and The V Word; on the other, nothing will quite stick with me like the abortion scene of Pro-Life. Falling firmly into the effective category is Joe Dante’s The Screwfly Solution (2006), an adaptation of Alice Sheldon’s short story of the same name. And now more than ever, we need to take a look at this story, because it’s terrifyingly relevant. 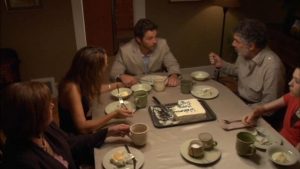 First, a quick review of the plot of the episode. A series of femicides is found to be the result of a virus that replaces male sexual desire for women with violent, murderous rage. These men form a religious sect called The Sons of Adam, who feel that women are the root of all evil and must be killed to return to a state of paradise; the only way to be a man and not go into a murderous rage is to undergo chemical castration. The story follows Anne (Kerry Norton), whose husband Alan (Jason Priestly) realizes the nature of the virus with his colleague Barney (Elliott Gould). Barney takes a shot of chemical castration, while Alan doesn’t; this causes Alan to become infected, and he warns Anne to keep away from him for her safety. As Anne flees into the Canadian wilderness with daughter Amy (Brenna O’Brien), they encounter the infected Alan, who kills Amy. Anne kills him and later wakes up in a hospital, where men start killing the female patients. Anne escapes, disguises herself as a man, and travels with Barney to hide in the wilderness. Barney later dies, leaving Anne vulnerable as two hunters find her. While hiding from them, she discovers that aliens caused the virus to leave the Earth devoid of women, with the male population that can’t reproduce left to slowly die out. 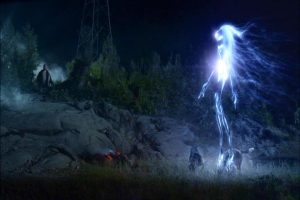 Go toward the light, Carol Anne…

It’s worth noting that the series expanded upon the original short story, which centered mainly around Anne’s struggle to get to the wilderness and her clashes with teenage daughter Amy. The Amy of the story does not want to believe her father would hurt her, and rushes to him while he’s in hiding while harboring the misguided belief that their family bond will override the virus. Alan commits suicide after he realizes that he’s killed his daughter, and Anne flees without the assistance of Barney; there’s no dramatic kill of Alan at her hands either. Other characters and incidents are also added to the teleplay. Also noteworthy: in the short story, Sheldon more explicitly states that once adult men start running out of females to kill, they begin picking off little boys. The implications of what happens to children when there are no women left are nauseating at best. 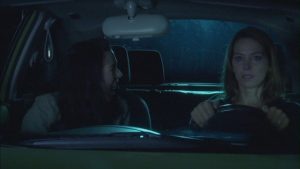 DAD LETS ME HAVE TWIZZLERS IN THE CAR!

So, let’s have a really uncomfortable conversation about this installment against the backdrop of the current state of things. There’s a lot of anger directed at women as of late by groups of men who wish to claim sexual access. The women who say no are viewed as problematic, and earmarked for termination. Placing the two concepts side-by-side for a comparison doesn’t take gargantuan leaps: the anger and rage directed at woman is chilling in this piece, particularly when flicking on the news 12 years after it was made. What’s scary is taking the logical steps of action and mapping them out to see the problems that arise within the proposed structure of thinking in the film, and how to apply it. First, we have initial infection and the rash of religious fervor – the proclamations that women are the root of all evil and must be punished – nay, slaughtered – to return to the state of paradise. Once this group gets their way, every single woman perishes. Paradise achieved, right? Except for one tiny detail: the human race dies out. Where there are no women, there are no babies, and no survival of the species. As much as both genders can suck, at this stage in the game, you need ‘em both to propagate that species. The men of The Screwfly Solution may have won the battle, but the aliens definitely won the war.  The anger and murder results in the idea that men have the right to channel sexual impulse into death and destruction of an entire gender. The parallels between this course of action and current events have been noted by quite a few women, though we tend to do so quietly. 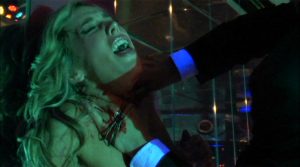 This brings up a broader point: when will enough be enough? Once the line is crossed into violence on an entire gender, the potentially-widespread devastation runs the risk of advancing into harming one’s own interests. If women are reduced to prizes of a small, select pool, you’d best bet that someone is going to try to usurp the resources by force. Suddenly, the woman you’ve “won” (what cereal box in Hell from which I came, I am not sure) is someone else’s prize, and that results in a further battle. The confrontation of personal shortcomings moves from socio-economic (e.g., “She doesn’t want to date me because I’m not rich”) to brute force (“She can’t date me because I lack the physical strength and weaponry to disarm my opponent”). It’s a mindset of always watching your back and using trickery and combat to ensure constant access. Some folks will fight over just about anything (exhibit A: social media), and when they have nothing left to fight over, they turn on each other. If the solution is to kill women, the pool of women to meet that need will only decrease, leading to more intense warring over the available slots, thus creating a further cycle of carnage. Once that number gets down to zero, it’s game over for everyone. 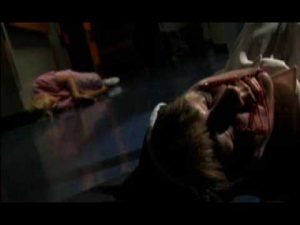 In the end, nothing will be left standing, and that is why we need to be scared of the example set by this series installment. In the end, The Sons of Adam wipe out all women in their anger. Their rage is directed at a group they blame for all the ills of the world. They’re successful; there’s no room left for interpretation there. As a result though, there is nothing left for future generations. Well, except for the aliens. They get the prize of a planet without a pesky dominant species.