Warning: count(): Parameter must be an array or an object that implements Countable in /homepages/45/d96662078/htdocs/clickandbuilds/TheBackseatDriverReviews/wp-includes/post-template.php on line 316
↓
Home→Comedy→Weekend Movies, Thanksgiving Edition: Five Reasons to Watch Dutch

Holy shit, Dutch is 26 years old. It’s old enough to have acquired a crippling student loan debt whilst attempting to make ends meet as a hostess in a chain restaurant. Dutch is old enough to not be on its parents’ healthcare plan; it puts off going to the doctor because it’s not insured. Dutch can’t afford a house because of avocado toast. That’s mind-blowing. Yes, whipper snappers, I saw Dutch when it came out in the movie theatres all that time ago. And you know what? You should totally watch it because it’s a kick ass Thanksgiving movie. Here are five reasons to seek it out this week. 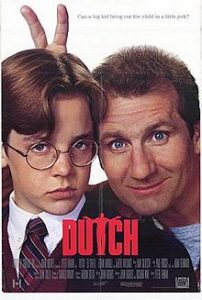 Watching two actors develop chemistry is a wonderful thing. I’m not just talking romantic chemistry – anyone can fake that (“Ahem, Erin, would you care to explain the lack of chemistry between Michael Cera and Mary Elizabeth Winstead in Scott Pilgrim vs. the World?” Touché, internet. Touché.). Watching a pair of actors that can really sell you on the buddy aspect of a relationship, even if it starts out roughly, is great to watch. Ed O’Neill as a by-the-scruff businessman and Ethan Embry as the bratty child of his sweet girlfriend manage to hit that sweet spot. They’re totally buyable, and the two play off of each other so, so well. You hope that they become friends by the end. It’ll warm your cold, dead heart. The sarcasm helps there too.

#2 – The score knows how to hit the right notes

I don’t always need a swelling orchestra or a killer guitar riff (we’re only allowed one Bernard Herrmann and Clint Mansell per generation, after all). Alan Silvestri did the score. If his name sounds familiar but you can’t quite place it, here’s a bit of help to jog the memory: he also did the scores for Who Framed Roger Rabbit?, the Back to the Future triology, Stop! Or My Mom Will Shoot, The Mummy, Forrest Gump, Van Helsing, and my personal favorite, My Stepmother is an Alien (I’m not being sarcastic, I actually had a big crush on Kim Basinger as a kid and loved that movie). A good resume, which comes in handy here: the music comes off as playful when it needs to be and thoughtful required. It will help you feel without needing to bash you over the head with it, which is nice. Not every score can do that. 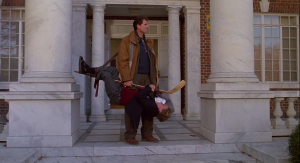 THIS IS SUCH A SELLING POINT. Drop what you’re doing to watch a 13-year-old Ethan Embry insult the living shit out of every soul that crosses his path. Do you hate other people? Do you house an inner misanthrope that just loathes everyone around you to the point of wanting to go live in a cave that gets both takeout and Amazon deliveries while staring down your nose at the rest of the world? Do yourself a favor and get to know Doyle. He’s amazing in how much outright contempt a small body can hold. It’s a work of art. Bonus points to Embry for pulling off a disinterested scowl at such a young age without breaking character. I wouldn’t be able to hold it together that long.

Elephant in the room: the class divide between the haves and the have-nots is getting wider and wider, without any indication of closing. People pretend it’s not there in a bid for “politeness”. Quite the contrary: we need to start demanding answers as to why the hell greed means more than having a fucking heart, because we’re headed toward such a sharp divide that a sudden reversal of fortune could render someone in dire straits within days. Make no mistake, a fall from grace can be nice to watch, but this film has a great message about growing a heart before it’s too late. And we goddamn need that right now. Don’t wait until we’re all in the poorhouse. Do something and recognize that there’s a powder keg of economic resentment. I can’t even type “before” anything having to do with consequence because I could literally follow that up with anything from “personal financial tragedy befalls you” to “French Revolution Part 2: Electric Boogaloo.” Point is, it’s scary, but it’s not too late to look around and see what you can do to change. Put yourself in someone else’s shoes and try to decrease the gap. 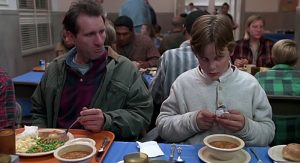 Sit up and pay attention.

This film features one of the most memorable fireworks displays in recent years. It’s fun and pretty and a little out of character for a Thanksgiving buddy flick, but it works. It’s perfect. And it makes me want to go buy fireworks and find an empty field.

You know what, just buy this one on Amazon and call it a day. Call it my gift to you.