Warning: count(): Parameter must be an array or an object that implements Countable in /homepages/45/d96662078/htdocs/clickandbuilds/TheBackseatDriverReviews/wp-includes/post-template.php on line 316
↓
Home→Horror→What’s In the Box: A Look at THAT Scene in Seven

Back in 1995, right before I turned 15, my mother, my sister and I went to go see David Fincher’s Seven. Some may not call that a wise parenting decision, but for an almost-15-year-old that could handle gore and references to literature (I had already read The Divine Comedy thanks to my beloved grandfather, whose gorgeous, illustrated copy sits in a place of high esteem on my bookcase), it was a smart and disturbing foray into the human psyche. Years after we first saw it, we talked about it over dinner, in which my mother insisted that we saw Gwyneth Paltrow’s head in the box at the film’s climax. We don’t actually see this (YouTube can back me up here), but there many others out there that hold the same viewpoint. They’ll argue with you that you see her head in that box, which merits a greater discussion: why would your brain trick you into such an inaccurate yet grisly detail? 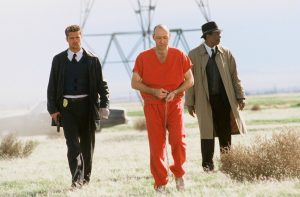 Part of this stems from background knowledge that we obtain long before anyone’s shipped out in pieces. In a moment of depressed confession, Tracy (Paltrow) tells new friend Somerset (Morgan Freeman) of her pregnancy. Somerset listens to her complain that she hates the city. The inference here is that while she wants kids – she explicitly states so – she’s not sure if she wants to raise a child in the city. While she doesn’t explicitly state abortion intent, she has yet to tell her husband, David (Brad Pitt), about the pregnancy, which makes it sound like she’s unsure if she’s going to keep it. Somerset offers her a personal story, in which a then-girlfriend had an abortion because he convinced her with a thought process he describes as, “How can I bring a child into a world like this?” He tells Tracy, “If you don’t keep the baby – I mean, if that’s your decision – don’t ever tell him that you were pregnant. But if you choose to have this baby, you spoil that kid every chance you get.” We don’t get a firm decision one way or another from Tracy, just tears. This is something she wants, but she’s weighing the best interests of everyone involved, which I cannot stress enough is extraordinarily difficult, especially when you want something badly. 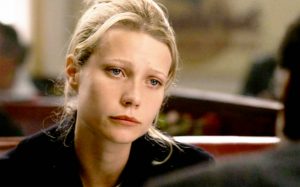 Been there, Tracy. I feel ya.

So when John Doe (Kevin Spacey) reveals that he’s killed Tracy and had her severed head delivered to the desert, we’re gutted for a multitude of reasons we may not be able to articulate in the moment. We know that this woman was unhappy and debating what to do with her pregnancy, and we know that she’s been murdered. That much is factual. However, there are two points here that make it even worse: David’s reaction, and what we can infer from Doe’s specific wording. David comes to the realization in front of us that his wife was pregnant, and he’s not just lost her, but a baby he most likely wanted very much. We see the pain and confusion as he attempts to comprehend this, and Pitt plays the part perfectly. Doe’s wording functions to goad David into shooting him, but it’s also selected to horrify the audience as much as the robbed husband/father-to-be. Simply, Doe manipulates us with the taboo of killing a pregnant woman, which ultimately speaks to the discomfort of infanticide. Doe tells David, “She begged for her life and the life of the baby inside her.” The wording of this is crucial: Doe doesn’t say that she told him she was pregnant – he tells David that she begged for the life of the baby inside her. It’s an intimacy for all involved because the unborn child is carried within her – it’s not something anyone can see at a given moment, the product of sex between a loving married couple in this instance. This is Tracy and David’s private business at the moment, as the pregnancy wasn’t public knowledge, and yet Doe’s announcing that they’re having a baby. In fact, Doe’s wording gives the pregnancy a definite direction on Tracy’s part if this is even her wording that’s being relayed: it means that Tracy was planning on keeping the baby. You terminate a pregnancy; you keep a baby. In this moment, though we don’t realize it because we’re watching the most tense four minutes of the film, we know that she was planning on keeping it. Call it a gut feeling, call it examining semantics, but Tracy consistently refers to her pregnancy as “baby” rather than by the clinical condition. That word choice demonstrates attachment on her part. It’s not a huge jump to think that she’s planning on keeping the child. In that moment of life-and-death encounter with Doe, Tracy doesn’t beg because she’s got a medical condition of a reproductive nature, she begs because she’s got an innocent baby inside of her that she cares about. That’s a big difference when it comes to emotion, and it makes the act of her murder all the more horrifying for us: this pregnancy was going to become a person. It wasn’t just a clump of cells. As a society, we want to protect our women when they’re growing something cute and cuddly that could possibly make a shit-tastic world a better place. An adorable baby makes the world a better place on a purely superficial level, one that some need to distract from the wars, inequality and injustice – it’s a living, breathing representation of a new start. It’s hope. To kill her means that every single person in her life failed at keeping her safe, and that we don’t get to see that tiny, cute person have a happy ending. It’s the silence when there should be a happy noise. And because we’re salacious and we want to know all the gory details, we have to know exactly how this happened. 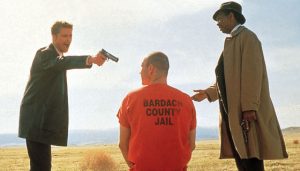 Most tense four minutes of the whole film, and that’s saying something.

This is the closest that Fincher allows us to get to the action: we hear second-hand what she said as we try to imagine what’s happened to this woman. Hell, we don’t even know if that’s what Tracy actually said! Fincher never shows us any of these moments of murder. We never see Tracy and Doe interact onscreen. We never see Doe kill her. We never see her head in the box – all we have is a small spot of blood, Somerset’s word and a damning slap to Doe. That’s it. We don’t get her words, we don’t hear her pleas. All we can do as an audience – and as David – is picture what she went through in her final moments. We have to imagine her head in that box, and it’s this imagining and this guilt and this need to know that causes some of us to swear up and down that we see Tracy’s pretty head in a box. It makes the action that much more concrete; we have to bear witness to it in order to believe that someone could do something that horrible. Nevermind that Doe has previously scarred someone’s face with acid or had a woman raped to death with a phallic knife or forced a man to eat to death or tortured someone for a solid year. We got to see the proof of that pain, from dead bodies to a traumatized man screaming in a police station. We didn’t get to watch a scared pregnant woman beg for someone not to kill her baby. We can only assume. We can’t put that boogeyman to rest. We can’t reclaim that back from the boogeyman; it’s ours with which to suffer.

It’s the inability to see that really bothers us most.

And so we picture Tracy’s head in the box. Despite that we never see it, it’s how we cope. We need to know how it happened because it’s so monstrous that Fincher wouldn’t allow us a passing glance into it. We make the trauma real through our imagination. We can’t fathom someone killing a pregnant woman – we need some sort of proof. We have to make our own if it’s not given explicitly.