Warning: count(): Parameter must be an array or an object that implements Countable in /homepages/45/d96662078/htdocs/clickandbuilds/TheBackseatDriverReviews/wp-includes/post-template.php on line 316
↓
Home→Horror→Weekend Movies: Five Reasons to Watch They Live

Some films are more guilt than pleasure; others are simply a joy in a world full of darkness. John Carpenter’s 1989 science fiction/horror film They Live falls firmly into the latter category. The story follows drifter Nada (Roddy Piper) and his accidental discovery of sunglasses that display an alien plot to overthrow humanity one subliminal message at a time. On paper, it sounds batshit crazy. In practice, it’s the best kind of batshit crazy there can be. Here are five reasons to watch it this weekend. 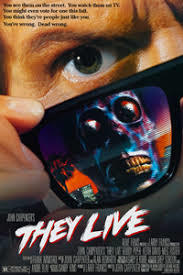 Piper died at the end of July in 2015. That means that two years have already gone by since we lost the Hot Rod, who was my favorite wrestler as a child. He did a slew of films and television work, some of which were good and some which were a bit… budget. This is one of the good ones. He’s serious and brooding and tough and it’s a great reminder as to why he was such a lovable badass. We miss you, sir.

Piper’s Nada has a fist fight with Keith David’s character, Frank. It goes on for almost six fucking minutes. I’m not kidding. Six minutes of two men beating the crap out of each other in an alley. It’s glorious. It’s also over-the-top that it’s been elevated to the level of cult worship: South Park recreated this same exact fight scene between the characters Jimmy and Timmy in season 5, episode 2 (aptly titled “Cripple Fight”). The scene got the South Park treatment, people. It’s totally worth it.

Carpenter did the soundtrack of this film along with Alan Howarth, who’s also worked with him on the scores for Halloween, The Thing, and Assault on Precinct 13. There are some familiar notes to it that you’ll recognize, which remind me of Big Trouble in Little China at some points (it’s the liberal use of synthesizers). Some of the titles of the songs are worth it if you hop on over to Spotify. Really, “The Siege of Justiceville” has to be my favorite.

This message was potent in the 1980s, which many still recall as “The Me Decade”. In the age of entitlement, frivolous lawsuits, ghosting and Keeping Up With the Kardashians, we’ve moved beyond the love of large cell phones and cocaine to come right back full circle to an even greater love of large cell phones and cocaine. Human beings are a pretty easy race to control, and if I happened to be an alien, I’d think we were a pretty primed race to sort out and dominate quickly.

Memo to the NSA: I am not an alien, nor do I have contacts that are. That’s a beautiful shirt you’re wearing. Brings out your eyes. 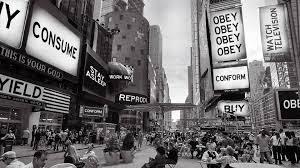 Did you know that John Carpenter was ready to quit Hollywood after making Big Trouble in Little China? He had a horrible experience with studio intervention, he kept getting shit because the box office returns weren’t what the studio wanted, and he was more than a bit miffed that he had to explain to studio executives that the character Jack Burton was the sidekick, not the hero. That’s a lot of crap with which to deal, and I wouldn’t have blamed him for saying, “Fuck this, I’m gone.” Luckily, he stayed and decided to give us this film. We’re grateful.

You can stream this film on… you know what, if you don’t own this, just buy it already.