Warning: count(): Parameter must be an array or an object that implements Countable in /homepages/45/d96662078/htdocs/clickandbuilds/TheBackseatDriverReviews/wp-includes/post-template.php on line 316
↓
Home→Gender→Women and Children First: The Sacrifice for Women in Train to Busan

2016’s Train to Busan left my heart pounding a way I hadn’t felt in a while. It built slowly but steadily, and despite some of its flaws, I found myself attached to the characters in a way that made the action more palpable. As we barreled toward the end of the film, I began to notice a trend with the deaths: primarily male, they all seemed to have one running theme: someone died in order for a female character – adult or child – to live. 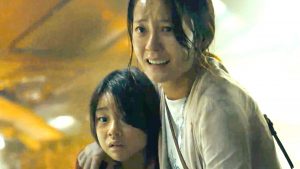 It’s down to you two, ladies.

On the surface, the story appears to be about fathers sacrificing themselves for their children. Seok-woo (Gong Yoo) spend the film struggling to connect to his young daughter, Soo-an (Kim Su-an). The relationship between the pair is strained, as workaholic Seok-woo can’t even remember giving his visibly heartbroken child the same videogame console two previous times. By contrast, we meet Sang-hwa (Ma Dong-seok) on the train, a blue-collar man who dotes on his pregnant wife, Seong-kyeong (Jung Yu-mi), who is heavily pregnant with their daughter. Sang-hwa lovingly waits for his wife outside of the restroom on the train and fights hard to defend her, doting on her belly with pride. The easiest thing to spot in this film is the contrast between these two men: one can’t stop working and ignores his child, while the other can’t wait for the arrival of his little girl. However, when push comes to shove, both men choose to die in the hope that their daughters can continue to live – an infected Seok-woo flinging himself to certain death after fending off a zombie at the front of the train (while remembering holding his newborn child for the first time), and Sang-hwa giving the band of survivors a running start (after calling out the name of his unborn daughter to his wife). By all means, we should be focusing on the sacrifice of the fathers in the name of their daughters. 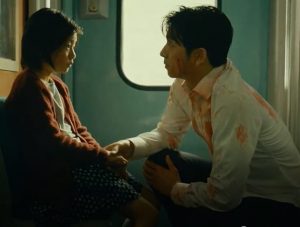 “I’m sorry I sucked as a dad before. I promise, I will get you that Wii you wanted…”

Except that these aren’t the only deaths in the name of women. Elderly In-gil (Ye Soo-jung) cannot bear to live life without her sister Jong-gil (Park Myung-sin), who has been turned into a zombie in an unfortunate casualty; rather than accept a life without her sister – whom she’s staring at through a glass door – she opens the door and allows for the zombies to attack, effectively joining her. In a similar fashion, teenage Yong-guk (Choi Woo-shik) stays with Jin-hee (Ahn So-hee), who has been attacked by a zombie. Rather than kill her, he chooses, like In-gil, to join her in a painful death that will ultimately leave him a mindless killing machine. Poetic? Yes. Sad? Absolutely – these are people who love someone so much that they’d rather die by the side of these women than face life without them. It’s the lasting impression that without someone you love, you are missing a crucial part of yourself, and therefore cannot carry on in their absence. 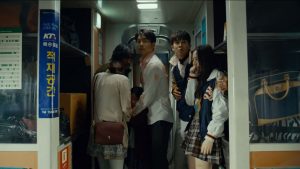 By shifting the focus from the fatherhood theme to one of the impact of women, the theme of the film suddenly changes. Women are the symbol of hope in this case, and how the characters choose to react to both the threat to this hope and its loss is telling. The fathers in this case literally slug their way through violent, aggressive, rotting bodies to ensure that their female offspring can continue to live. There’s not hope for themselves – these men fight to ensure that in the end, their ladies get to Busan safely. Despite that they’ve been through hell, Soo-an is holding the hand of Seong-kyeong at the end of the film, finishing a song at the request of her father. It’s a little girl that will continue living (and singing) to make her daddy proud, demonstrating the lasting impact of the father-child bond. Likewise, Seong-kyeong will live to give birth to her daughter, who will bear the name her father picked for her before he gave his life to ensure her survival while she gestated within her mother. Both man’s final act is to think of his infant daughter, whether in flashback or through the act of speech. For In-gil and Yong-guk, the prospect of life without the women they love is something so psychologically scarring they can’t process the concept, choosing death over a life without these women. That speaks to a rather deep, shattering love: someone you cannot fathom life without, dying in front of your eyes, then reanimating into a shadow of the former self. There is not carrying on for these two – no babies, no new hope, no future. With nothing to protect, the deaths of Jong-gil and Jin-hee prove an event that cannot be overcome. When hope dies, these characters choose death as a way to avoid a life without love. 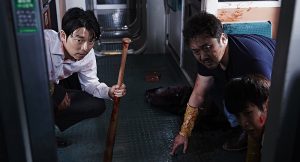 When the going gets tough, the tough get a baseball bat and wrap their arms to better do battle.

Train to Busan cleverly inserts this symbol in a way that’s been covered before – after all, one of the key phrases used by Major West (Christopher Eccleston) in 28 Days Later: “I promised them women, because women mean a future.” Without the women they love, our characters can’t go on. However, if there’s a slight chance for survival of these females, the men step up to sacrifice. The women are hope, and even though they’re beaten down and exhausted, at the end, they’re still singing, demonstrating their humanity in a moment of abject heartbreak and despair.