Warning: count(): Parameter must be an array or an object that implements Countable in /homepages/45/d96662078/htdocs/clickandbuilds/TheBackseatDriverReviews/wp-includes/post-template.php on line 316
↓
Home→Comedy→Weekend Movies: Five Reasons to Watch Killer Klowns From Outer Space

Recently, all eyes have been on the forthcoming adaptation of Stephen King’s It. Admittedly, it does look good (despite the fact that my ex-husband spent multiple minutes at my dining room table playing the footage of Georgie smacking his head on the road sign and falling down, nearly crying with laughter). There’s been a ton of talk lately about clowns being the worst thing on the planet, but fear not, gentle readers. We’re going to look at some ridiculous clowns. Klowns even, using the K for everything since before the Kardashians pushed their way onto our television sets. Here are five reasons to watch the 1988 camp-fest Killer Klowns From Outer Space. 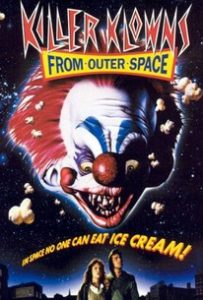 #1 – The clowns really aren’t that bad

You read that correctly. Are they creepy? For about 30 seonds, yes. However, the clowns look mildly drunk for a majority of the film, and who is terrified of a half-crocked man in his 50s that can’t walk in a straight line to save his life, let alone tie a balloon into the shape of a horse? I may be a massive wimp when it comes to clowns, but these are nowhere near as bad. The members of Slipknot have far more disturbing masks than these guys.

Who doesn’t love a bunch of aliens in the 1980s that invade and hope to make the human race their food source? These aliens really go the distance in terms of commitment to a bit. They disguise their ship as a circus tent. They wrap their victims in pods that look like cotton candy. They emit glowing lights from their ray guns. It’s cliché and cheesy, but in an age where the Ringling Brothers were a big deal, it makes sense. Plenty of fodder for hijinks as they throw every gag in the book they can toward being a brand new clown. 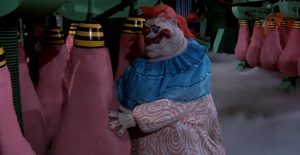 Pay no attention to the alien clown playing with his cotton candy ballsack.

#3 – The plot is ridiculous

A group of aliens comes to Earth to kidnap and eat people. Sounds reasonable. They’re disguised as clowns, who have no problem getting around town, interacting with people who think it’s a giant joke. Personally, had someone dressed as a clown come anywhere near me – past, present or future – you can bet that I’d be yelling, screaming, and applying the mace liberally. I’m not in the minority either. Clowns are fucking creepy. Especially clowns with cracked makeup and misshapen heads. No way in hell would they be allowed to move freely about, let alone get within striking distance.

One of the best parts about a B-movie is the acting that comes along with it. It’s like free gift with purchase at a department store makeup counter: about 90% of the time, that’s your huge draw to it in the first place. When I get over-emoting coupled with obvious recap of what’s just happened, that’s a good day. It’s lazy storytelling, but this movie knows it’s not winning any Oscars. It has managed to pie-face it’s way into my heart though (I’ll show myself out). Bonus: John Allen Nelson is in this, who delivered one of the most riveting performances of my childhood in the body swap comedy Hunk. 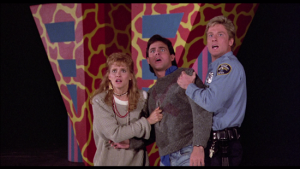 HOLD THE PHONE. Return of the Killer Klowns From Outer Space: 3D is scheduled to drop in 2018. Original director Stephen Chiodo is coming back to direct it, and star Grant Cramer is coming back onboard as well. 30 years later, we’re finally getting follow up. In a trash fire of a world, we’re getting a Killer Klowns sequel. It’s not absolute zero, guys. We’re going to be okay.

It’s available on Amazon (free if you’ve got Prime) for streaming. What are you waiting for? Jump on this!