Warning: count(): Parameter must be an array or an object that implements Countable in /homepages/45/d96662078/htdocs/clickandbuilds/TheBackseatDriverReviews/wp-includes/post-template.php on line 316
↓
Home→Comedy→Civic Dissonance: The Shock Factor of Harold and Maude

1971’s Harold and Maude is often cited as one of the most honest, touching, uplifting love stories of the 20th century, and with good reason: it’s honest, touching and uplifting in all the right spots. It features the quirky love story of young, wealthy, terribly depressed Harold (Bud Cort), who meets sprightly, nearly-80 woman named Maude (Ruth Gordon). Part of the beauty of Maude lies within the fact that she helps Harold really appreciate life – she gives him the chance to see the beauty in the small things, to realize that it’s all just small stuff, and that it’s all within our grasp. Interestingly, it’s not entirely Maude that gets Harold to make the jump from discomfort-inducing pessimist to life-embracing optimist. Under closer examination, Harold is already a master of the art of cognitive dissonance; he merely needs a little articulation in order to fully perceive himself as a free spirit that disrupts the traditional modes of thought. 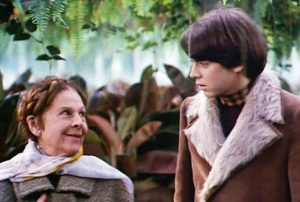 Fight The Man, you two.

Harold is full of surprises, albeit ones that the general population find morbid. Harold’s mother, Mrs. Chasen (Vivian Pickles), is hellbound and determined to force her son into the appearance of respectability. The more she pushes, though, the more he fights back through action rather than word. This results in his transformation of a Jaguar into the hearse his mother had carted away. It also results in her completing his computer dating form in an attempt to marry him off, which goes equally awry when he begins staging pranks to scare off potential mates (themselves far more interested in the house and the prospect of a wealthy young man than the notion of Harold himself). These run the gamut from prosthetic limb removal to dummy immotation to staged ritual suicide. What’s interesting is the design that gets set up early on. Harold isn’t just morbid – Harold tests out the nature of human emotional connection by making other people uncomfortable, effectively weeding out those who actually care. He uses the behavior to chase off women he has no interest in dating. Furthermore, he uses his behavior as a way to elicit a response from his frosty mother. At the beginning of the film, Mrs. Chasen finds Harold staged as having slit his wrists and throat in her bathroom. It’s not so much the notion of her child being dead that bothers her – it’s the fact that he’s made a mess and continues to do so that bothers her. Hence, he recieves lectures on his behavior and declarations of her not being able to continue living like this. Mrs. Chasen wants the symptom to disappear, which results in the controlled behaviors, such as the car, the dating service, the psychiatrist and the threat of military service. Harold elicits a reaction from her in an attempt to reveal human emotion: he wants the bond with his mother, who really views him as a thing as opposed to a person that requires growth and support. That’s crushing for a sensitive person, and so he reacts by forcing her to deal with the stimulus she deems unpleasant. It’s the unpleasant nature that produces the effect she can’t ignore: she has to constantly combat those feelings. If it’s controllable, she can dominate it and pretend it’s not there. 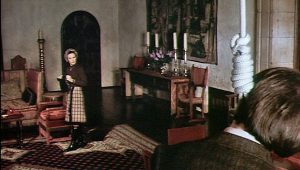 We all have at least one friend with *that* mom.

Enter Maude, who helps to articulate Harold’s impulses, recasting the experience in a positive fashion. Maude describes herself as “always looking for the new experience,” particularly when she’s stealing cars. Harold takes note that her actions are not perceived as positive and thrilling by others, quietly mentioning in their earlier conversations, “I think you’re upsetting people. I don’t know if that’s right.” Maude, however, doesn’t see it as a matter of right or wrong, explaining, “Well, some people get upset because they feel they have a hold on some things. I’m merely acting as a general reminder: here today, gone tomorrow, so don’t get attached to things. And now, with that in mind, I’m not against collecting stuff…. This is all memorabilia, incidental.” This is a beautiful articulation concerning the notion of detachment, a principle used by Buddhists to achieve an enlightened state of being. Maude feels that she must act as an agent of confrontation in this respect, which forces those around her into seeing the world as made of stuff; by stripping away the stuff, Maude makes others view the world in terms of humanity’s connections rather than by the objects we use to define ourselves. This fits in perfectly with the notion of cognitive dissonance, which sees two opposing ideas or beliefs clashing to create an inner turmoil the mind cannot easily reconcile. Even then, Maude sees a pattern of human nature many are loathe to admit: “Consistency is not really a human trait.” By this logic, anyone in a pattern is subject to behaving in a fashion that is more so conditioned rather than authentic. Even Maude falls prey to this, declaring that she would like to one day be a sunflower while listing off the beautiful traits; Harold, on the other hand, wants to be like a daisy in order to fit in. She wants to fit the notions of beauty, while he wants to conform. It’s the ultimate symbol of where each is in their relationship to dodging expectations and forcing a confrontation of the opposing sides of the self: Maude wants to rise above, while Harold wants to blend in. It’s up to her to rise above and show someone else what he’s been missing. 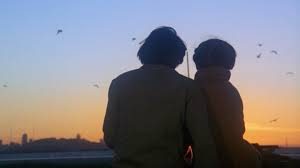 I want them to win forever.

Harold recognizes this quality, which leads to the point of facing his cognitive dissonance. While recounting the false report of his death that his mother received, he tells Maude, “She put one hand up to her forehead, the other one she reached out, and she groped for support. …She collapsed in their arms.” At this point, he sobbingly confesses, “I decided then that I enjoyed being dead.” Harold isn’t really trying to kill himself – Harold wants to know that he matters. He wants the love and affection – vital human emotions for survival of the mind – as opposed to the actual act of death. His staged suicides are really attempts to make a connection, which causes great mental strife: try as he might, the notion of his death doesn’t make a dent to his mother in the way it previously had. This is a young man that wants the proof that someone loves him, that he matters; his mother simply cannot give anything more than a performance. For anyone that’s had to endure a mere display of affection for the sake of social appearance, it’s brutal when you realize that the emotion simply does not exist; it causes such sorrow and confusion to know that you do not matter. The parental aspect is one that proves even more damning: from an instinctual perspective, Harold’s mother should care about his life and death because she should be hard-wired to do so. It’s in this moment that Harold has to confront the carefully-constructed facade versus the true value he is to others, and it’s terrifying because the only one who sees his value as anything other than expectation or conformity is Maude. In typical Maude fashion, she finds a way to reconcile his feelings by telling him, “A lot of people enjoy being dead, but they’re not dead, really. They’re just backing away from life.” It’s not that Harold wants to be dead. Harold does not want to feel the pain of being rejected and unloved. By actually living, Harold cheats the game – he can confront a psychological nightmare and come through thriving. Through her statement, Maude is able to set his mind at ease by placing the onus of behavior onto the actor as opposed to the target. It’s not Harold’s fault that his mother’s an asshole; Harold can only control Harold, and thereby reconciles his sense of self and value in his mind and heart. 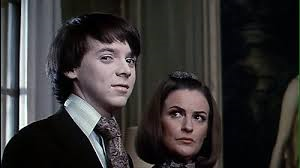 Harold is then able to embrace his feelings for her, which defies social convention and creates unrest in others. However, Maude is right – for the others around Harold, it’s the stuff that interests them as opposed to the reminder that it can all change in a moment. Being alive means looking at all aspects, even those that trouble us. When we realize that we don’t matter to others, it’s often nothing to do with us – it’s everything to do with their own issues, their own backing away from the inevitable and unfamiliar. Maude proves that by embracing the conflict, you can begin to heal the one thing in this world you can truly rely upon for happiness: yourself.