Warning: count(): Parameter must be an array or an object that implements Countable in /homepages/45/d96662078/htdocs/clickandbuilds/TheBackseatDriverReviews/wp-includes/post-template.php on line 316
↓
Home→Horror→Weekend Movies: Five Reasons to Watch Aliens

James Cameron’s 1986 science fiction film Aliens is, to quote my friends from the U.K., the tits. It’s got everything… certainly way more to offer than most of the traditional rom-com fare out there. It’s a tradition for me to watch it on Valentine’s Day every year. I could give you a dozen, but as I’m lazy, I’m only giving a handful. Here are the top five reasons why you should considering it in time for good ol’ V.D. 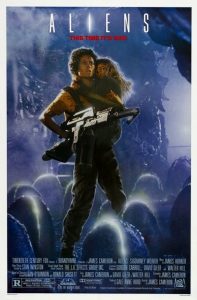 Well, well, well, wouldn’t you know – Ripley (Sigourney Weaver) gets a chance to get the guy this time around. Throughout the film, we get to see some flirting and bonding with Corporal Hicks, played by the dreamy Michael Biehn fresh off of 1984’s The Terminator. Fun fact: James Remar was supposed to have the role, but was fired from the project because he was busted for drug possession. In retrospect… I don’t think his Hicks would have worked well with Weaver’s Ripley. Biehn and Weaver do well together.

#2 – It covers more than one type of love

You want to see a love story that will rip you in half? Look at the journey a woman goes through when she loses a child and gains a new one. Ripley loses her daughter to old age and has to deal with the guilt of being a working mom (damn you 1980s social commentary!). She then picks up and gains the trust of Newt (Carrie Henn), a traumatized child that’s had to endure the alien menace. Watching a woman fireblast through hell to save a child she loves is one of the more moving love stories out there. Don’t limit yourself to just one version of love. 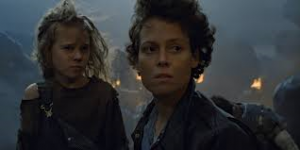 Have to admit, this is better than bonding over Girl Scout cookies.

#3 – There’s quite a bit of pregnancy there

Again, I’m referencing a conversation I had with my friend Kris ages ago: this film can technically be classed as a love story because there’s a ton of impregnation going on. If that’s an indicator of successful romance, then this movie has it in spades. Yes, that’s cheap and cheeky. But it counts. That’s my story and I’m sticking with it.

If you’ve spent more than 15 minutes with me, you will know that I love horror and hate romantic comedies. Part of this: I do not trust the concept of America’s Sweetheart. No way. Hate the extra teeth, hate the overt hard sell of the winsome persona, hate the fact that you know these women are mean girls that are going to flash your partner and charge their bar tab to your account. That’s why Ripley is far better. Ripley kicks ass: she’s not afraid to stand up to the bureaucracy, she knows how to handle a gun, and she can take charge like there’s no tomorrow. If you’re going to fall in love, do it with the chick that can handle her shit. 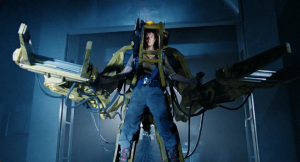 This score has soft strings, which help convey emotion. The real prize, though, goes to the use of the anvil. “Bishop’s Countdown” is fantastic. There’s something perfectly claustrophobic about running through a hostile environment with string and an anvil blasting – it ups the urgency of the moment and gets the blood pumping. Yes, I love music. No shame there. We miss you, Mr. Horner.

Do yourself a favor and skip the usual. Find this one and rent it. Actually, just go out and buy it. Way better than flowers.