I don’t know about you, but there’s some stuff I’ve got planned for the week that’s making me feel like this: 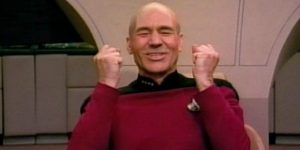 This week, we’re going for fun. It’s been too serious around here in the past week. So, you’re getting a look at how in the hell Laura Palmer is able to cram everything into a 24-hour period (I’m starting to suspect that she’s a Time Lord) on Twin Peaks. Because we’ve been binge-watching in anticipation of the new season, and it’s mind-boggling. We’re not done with the 90s yet by any means, as Thursday sees a recommendation for Grosse Pointe Blank. So bust out that TLC album and wear your best Blossom hat, because we’re headed back to the 90s for one week of glory.