Tobe Hooper has passed away. I feel like there are too many good artists that we’re losing lately, but I also keep reminding myself that we’ve had them for far longer than we’ve gotten others. Instead of feeling sad, I’m going to be happy that I got to be alive at the same time as the man that made The Texas Chainsaw Massacre. And I’m going to cope using humor and some analysis. 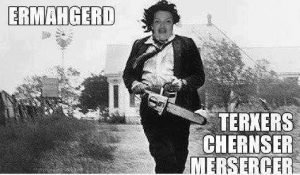