I don’t know if anyone else is in this boat, but has holiday shopping been kind of blah this year, or is it just me? I’ve gone out to a few stores, and not only has store turnout been so so, but the general tone is, “Don’t spend money.” I know more people that are happy to hang out and bake cookies together, which is sweet and on point with the theme of the season no matter what religion/faith you happen to be, but I must admit that it does make me fear for the economy. Any time that stores have been this dismal, it’s a bad sign. But, you know, stockholders are totally going to reinvest in us, so we should smile and be thankful for trickle down economics. (Note: that was sarcasm.) 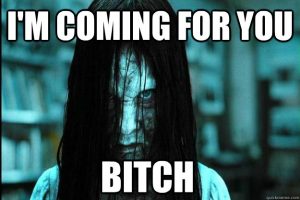 As you can guess from the image above, we’re gunning for a bruising this week. We’re attacking the big one. We’re coming for Frank Capra’s widely regarded film, It’s A Wonderful Life. I cannot fucking stand this film. In the words of Sophia Petrillo to Blanche Devereaux, “Fasten your seatbelt, slut puppy.” To balance that – since it is a wonderful time of year, after all – we’re going to recommend a really good movie. The Holiday does not get the love it so richly deserves, so we’re going to show it some love.

In the meantime, be good to one another. We live in a scary world and while it’s not going to get better in the interim, it doesn’t take much to do something nice for someone else, be it a smile or a sandwich. The world needs more kindness and perspective.