Warning: count(): Parameter must be an array or an object that implements Countable in /homepages/45/d96662078/htdocs/clickandbuilds/TheBackseatDriverReviews/wp-includes/post-template.php on line 316
↓
Home→Bullshit→Complete Discomfort: Torture, Rape and Revenge in Witchfinder General

Oh I do not want to write this one, but I feel it’s a moral imperative. I caught 1968’s Witchfinder General for the first time a week ago at the time of this writing – a friend of mine insisted I watch it, and I wasn’t sure myself how I had managed to keep missing it. To say this film left me upset and shaken is an understatement. I wanted to cry for the female lead Sara (Hilary Dwyer), and found myself increasingly upset with the impunity with which Matthew Hopkins (Vincent Price, who was delicious in this role) and his assistant, John Stearne (Robert Russell), tortured and killed people. I hadn’t been cut to the bone like this in a while, especially when it comes to a film dealing so heavily with women being abused in the name of political power. 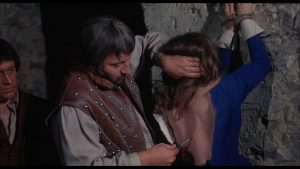 Because what other way is there to stick it to someone you’ve violated, amirite?

Historically, Hopkins and Stearne combined forces to murder roughly 300 women in the period of two years. Of the approximately 500 people that were killed based upon witch trials in the 1600s, 60% of them were the result of Hopkins and Stearne. They were monsters. They used to cut extremities to see if the “witches” bled; they tied people to chairs and threw them in water to see if the water would “reject” them in what was known as the swimming test; they wouldn’t let someone sleep and then would attempt to question them in a delirious state regarding witchcraft; they’d poke and prod any marks that seemed off – ranging from moles to scars – with sharp or hot objects to see if it was a devil’s mark (the belief being that they wouldn’t scream if the mark truly was that of the devil). If you survived a test or restrained yourself from screaming, you were declared a witch and killed; if you expressed pain or died, you were innocent, and the death was shrugged off. It was a zero-sum game. Hopkins wasn’t above trying to undermine anyone who criticized him, either: when John Gaule went to bat for a woman accused of witchcraft, Hopkins insinuated that Gaule’s questioning of the woman may have rendered Gaule impure and therefore a witch as well. He was a sneaky, self-serving sort that wanted to be an unquestioned authority. All of this, the film got right. What they didn’t get right was his death – Hopkins wasn’t killed by anyone: he most likely died of tuberculosis. He was plenty hated, though, and as such, rumors sprung up regarding the death of Hopkins, the most popular being that he had been subjected to his own swimming test. It was the way that a scared public reclaimed the night back from the boogeyman. 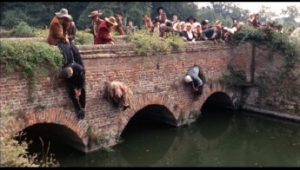 The swimming test. We’re about 20 minutes away from this one coming back.

It’s this same sense of avenging victims and punishing the corrupt arm of the law that the plot of Witchfinder General seeks to capture, and it does so successfully. Price’s Hopkins uses coercion to have sex with Sara, which is rape; she’s later violently raped offscreen by Russell’s Stearne, and both instances are equally cringe-worthy in the film, despite that we don’t see much except for two creepy ass dudes with an awful lot of power verbally declaring that they’re going to force their dicks on a woman who is in no position to say no for fear of her life. When Sara’s husband, Richard (Ian Ogilvy), finds out about the rapes, he doesn’t blame her or shame her for the crime as we’d expect of this era; instead, Richard goes full Bride in Kill Bill and hunts the men down. Hopkins and Stearne then – instead of admitting they grossly violated a woman who has a pissed off husband coming after them – seek to have both their victim and her angry husband arrested on trumped up witchcraft accusations and murdered via torture. This is both completely believable and horrifying because we still see abuses of power like this in the modern age. Doesn’t matter if it’s a cop, a teacher, a politician, a doctor… the list could go on. Any time that there’s a power dynamic, you get at least one asswipe that decides to coerce or violently assault a person in a vulnerable position, and the powers that be will help in covering it up because, well, they’re just as power-hungry; any admission of wrong-doing undermines everything, apparently, so it’s easier to let justice slide. 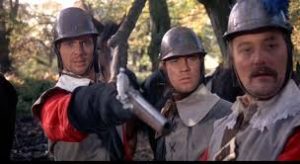 Hopkins and Stearne, you in danger, girl.

The interesting part about Witchfinder General lies in the fact that it was originally a lot more bleak and brutal toward both its victims and its villains’ demise than we’d thought. Director Michael Reeves and writer Tom Baker put a lot more into the original draft of the script, which saw the character of Hopkins being treated as an inept face of authority rather than the chilliness of Price’s Hopkins. In fact, Reeves and Baker had Donald Pleasence in mind, who we all knew would go on a decade later to play the iconic Dr. Loomis in Halloween (oh, the irony here that they picked Pleasence to be the inept one). When the script came under review, it was criticized for being utterly sadistic. Reeves and Baker were forced to remove extended torture scenes, which included an on-screen decapitation. Curiously, though, the original brunt of the brutality of this script came in the form of what transpired at the end of the lives of Stearne and Hopkins. Stearne stumbles upon a Romany group and attempts to rape one of the group’s women; she responds by poking out his eyes with her fingers, and the group stabs him to death. Hopkins is subsequently beaten badly, then subjected to near-drowning, then hung. Reeves and Baker weren’t messing around – they punished these torturers/rapists in a way I would have loved to have witnessed. The concepts of rape and torture are horrifying, and when we’re given a chance to see someone who violated another person punished, many want to jump on that chance. Throw in the thought that the perpetrators are a pair of corrupt men who consider themselves above the law – who torture and inspire terror – and this feeling goes from schadenfreude to absolute glee. We hate the characters and what they’ve done. We’ve watched them torture, rape and destroy lives. We’ve watched them whip up fear and hatred, preying upon mob mentality to further isolate their victims and justify their actions as being for the communal good. Personally, I wanted the original ending Reeves and Baker had in store for us. I wanted not just to see them punished – I wanted to watch them suffer. You can say that makes me no better than a mob member, but dammit, when you’ve seen victims suffer and get shamed into silence… you want someone to right the wrong. You want the monsters to go away, and never come back. And the door is welcome to hit their ass on the way out. 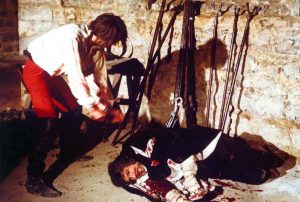 For me, the most horrifying aspect of Witchfinder General isn’t that Hopkins and Stearne were two real people who got away with torture and murder in an age of corruption – it’s that hundreds of years later, we’re still watching people have their lives destroyed by false accusations and real victim intimidation. It’s that the aspect of selling someone out to your advantage still happens, and authority figures continue to wave around power for their personal benefit. It’s that victims feel they have nowhere to go. And it’s the disconcerting knowledge within myself that if that ever happened to someone I love, you bet your sweet ass I’d be playing the part of Richard Marshall.