Warning: count(): Parameter must be an array or an object that implements Countable in /homepages/45/d96662078/htdocs/clickandbuilds/TheBackseatDriverReviews/wp-includes/post-template.php on line 316
↓
Home→Action→Daddy, My Dear: Fatherhood in Warcraft

**WARNING: This analysis contains plot details of a film that is currently in the theatres. Read at your own risk.**

I knew going in that Warcraft had the potential to either be really good or really bad on a personal level for me. The game from which the film originates – World of Warcraft – has so many good memories attached to it: hours of gameplay, friendships forged, even a child conceived as a result of waiting around for two guys to show up and run the Scarlet Monastery (yes, her father and I considered naming her Scarlet; thank god we weren’t running Gnomeregan). Point is, this was a loaded gun. Duncan Jones did not disappoint me,which is not surprising because, well, he’s Duncan Jones – the man is a talented storyteller. He kept the pace snappy. He inserted plenty of nods to the game, as well as an Army of Darkness joke (c’mon, boom stick?! I clapped. Point goes to Duncan.). He kept the story truncated, choosing to include the struggle between humans and Orcs without going overboard by including every single last race; that was refreshing. It even presented the motivations of both sides in a manner sympathetic to each side, an appealing equality the game has in an effort to fully flesh out the characters it builds into real people (or Draenei, or Tauren). Even more endearing? Together with writers Charles Leavitt and Chris Metzen, he provided a beautiful exploration of fatherhood through the characters Lothar (Travis Fimmel) and Durotan (Toby Kebbell). 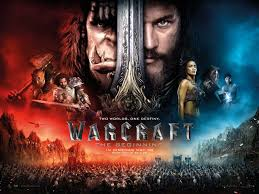 Really was not expecting this theme.

Let’s start with Lothar. When this tall drink of water walks onscreen, we know that he’s our romantic hero: swishing hair, brooding facial expression, plated armor, piercing blue eyes. Slap him in a business suit and he’s interchangable as the love interest in a film set in the modern age. It’s loud and clear that this is the one we’re supposed to swoon over. So it’s surprising that our romantic lead is then revealed to be a father, as film tends to get us to think of our lust-worthy heroes as something other than the guy that changes diapers and takes his kid to baseball practice. This is where Warcraft gets genius: this isn’t a little kid that some kindly female love interest will one day become doting stepmother to. Nope: Lothar’s the father of a young adult. Not just any young adult: a soldier named Callan (Burkely Duffield), who looks, how shall we say, a little young to have joined the army. In fact, their dynamic is both familiar and sad. We can glean that Lothar was a young father, and he informs us later on that his partner died in childbirth, leaving him to raise Callan alone. He openly admits that he blamed his child for his partner’s death and continued to have his military career, which cannot have been a fun upbringing for a child without a mother. How did Callan respond? He joined the army, with his father constantly watching over him and making sure that he was kept safely away from the action that was claiming the lives of others. When Callan does engage in battle, he dies at the hands of Orcs. This death isn’t pretty by any means: after Medivh (Ben Foster) generates a protective field that does not include Callan, Lothar tries in vain to break through to be with his child. He’s not successful, and he instead watches as his son fights the Orcs and is slaughtered, then hoisted as a type of battle trophy. This is wrenching to watch as two comrades in battle, let alone a father watching a child die in front of him, a child with whom he had made mistakes and housed regrets. This man is never going to get the chance to tell his child that he was proud of him. It takes the horrors of war to another level. 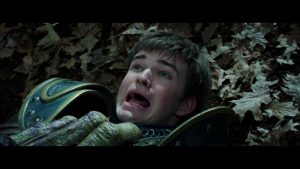 This is where seeking parental approval will land you.

Durtoan, on the other hand, represents the stoic dad that is willing to do whatever it takes to give his child a better world, even if it means placing himself on the line in order to do so. We see some touching moments at the beginning of the fim between Durotan and his pregnant mate Dakka (Anna Galvin), displaying that even though he looks fairly monstrous to a human, he’s a doting, nervous father-to-be. He offers to go in front of Dakka during their migration through the portal, as if to protect her from any harm. He watches helplessly as she gives birth to a still born (sidenote: kudos to Jones for showing a birth that included a woman on all fours that wasn’t whining, “I can’t!” halfway through – it wasn’t a huge cliche, and for that, I’m grateful). We see his joy when baby Go’el has the fel transferred into his body, and we see a different spark ignited: that of a man that will do anything within his power to give his child a better life. He participates in raids with which he grows increasingly uncomfortable, and even though he knows that different races will be killed, he participates in order to give his son and people a shot at life in a world that isn’t a barren wasteland. This experience with difficult decision-making makes it easier when he has to make other tough choices. He begins to stage a rebellion against Gul’dan (Daniel Wu) after reflecting upon the pattern of world death and destruction. Durotan realizes pretty quickly the road that he’s headed down: he tells Drakka to take their son and leave, and he goes up against friends and superiors alike with his questions and clandestine meetings with the Alliance. He battles Gul’dan, challenging Gul’dan’s honor publicly during hand-to-hand combat. Make no mistake, Gul’dan does indeed win, but it is only through the agency of shadow magic, which loses the respect of the tribes based on their values of fair fighting. Durotan knows that he’s going to die, but his actions lead to the group of Orcs questioning the supreme authority and honor of their leader. He’s willing to die in the name of giving his child and his people a chance at a better life.

Who wouldn’t destroy a world for the love of their child?

The underlying themes of these characters and their storyline outcomes makes quite the statement on fatherhood. Lothar created an environment in which he allowed his own hurts to dictate his closeness to his son. Sure, he was a father, but he was overprotective and distant, which made his son crave his approval. This led to Callan following in his father’s footsteps, which is easily interpreted as joining the military to make his father proud. That it’s rewarded with agonizing death right in front of the father he attempted to please speaks to how futile this path is: Lothar is left to grieve his own mistakes, alone. Durotan, on the other hand, pulls out all stops to make sure that his beloved baby has a chance in life, even if it means capturing men, women and children for certain death and then dying himself. It’s not just Go’el that Durotan is trying to protect – it’s his entire clan, to whom he feels responsibility for their survival. He dies in an attempt to help the others break free from an oppressor that is destroying their resources; even though he’s dead, he needs to be the good example to lead his tribe and, by extension, his family. We never once hear him reflect upon how unfair his lot is because Durotan is too busy getting shit done. In essence, Lothar and Durotan represent the difference between a father and a dad: sure, a father may have created you, but a dad leads, shapes and demonstrates the sense of responsibility toward that which he puts into the world. Lothar watches his creation die trying to make his father proud; Durotan dies to stop a egomanical despot from destroying the one chance his baby and tribe had at a happy, prosperous life. One has regret and shame, while the other gets to become a bit of a legend. The best part? We can see exactly how this happened. One was a struggling single dad that was probably a bit too young to take it on by himself; the other was a mature leader that wanted the best for his child. There’s no right or wrong here – only the examples of what can and does happen in real life.

It’s fitting that in the end, we see growth as a result of the fatherhood experience. Durotan’s tusk is taken so that it may be given to his child, as a reminder to always be proud of the good example set forth by someone who acts to give you a better life. Lothar learns the value of speaking, telling Khadgar (Ben Schnetzer) that he’s proud of him. These characters learn something. We like them both, and we’re sad for the both of them. So bravo to Warcraft for giving us fathers that are people, that make mistakes, that take stands, and that continue on in the face of adversity.

From all of us at The Backseat Driver Reviews, Happy Father’s Day.