Warning: count(): Parameter must be an array or an object that implements Countable in /homepages/45/d96662078/htdocs/clickandbuilds/TheBackseatDriverReviews/wp-includes/post-template.php on line 316
↓
Home→Horror→Family Comes First: Maternal Sacrifice in Spring

Ever fashionably late, I first caught Spring about a week ago as of the time I write this, making me the old lady that’s officially out of the loop with what the cool kids are doing. The film definitely lived up to the hype, crafting a love story about acceptance and endurance in a pair that barely knew each other, yet felt an extraordinary connection that developed into devotion and acceptance of the self no matter how literally ugly and dangerous it gets. One of the striking pieces of this film was the notion of maternal sacrifice, or rather, how life for the mother ends when the child is allowed to be carried to term.

Louise (Nadia Hilker) explains her odd condition to Evan (Lou Taylor Pucci) after he witnesses her transformation into an octopus-like creature: every 20 years, she must get pregnant and use the cells generated from the embryo to continue her life cycle. The new genetic material is incorporated into her body, essentially making Louise an incarnation of a child she would have borne to a sex partner had she carried the child to term. Louise is thus able to keep her body from devolving into more primal life forms by consuming the resources of her child – she’s effectively robbing the cradle to create her own fountain of youth by usurping the reproductive cycle for herself. This action has caused her to continue living for 2000 years, making her genetic makeup the total of approximately 100 sex partners to stave off death. Along the way, she tells Evan of her exploits, ranging from surviving the Black Death to the Renaissance to genetic research in modern day Italy and France. Louise has seen some cowboys, and she takes glee in her experiences (though not the housekeeping aspect of willing herself property, which she calls “a fucking nightmare”).

“Thank god, you remembered to get milk…”

The way that she can break this cycle is equally as telling as the tales Louise recounts: if she falls in love, the cycle will stop absorbing the embryo’s stem cells, she will continue the pregnancy, and lose her immortality. This mutation didn’t begin with her: as she shows Evan the ruins of Pompeii, she points out her mother, father and little brother, all of whom perished in the volcanic eruption; when asked how she managed to get away in time, she explains that she didn’t, and had in fact inherited the condition from her own mother, who chose a life with her father over immortality. Once her pregnancy is revealed to Evan, their conversations are interspersed with various references to impending parenthood, including her asking him if he’s ready to become a father, and his jokes that being with her is a bit incestuous given her body processes. Louise even makes a few comments regarding growing large with a pregnancy, which she nearly deems as monstrous as her condition itself.

These pieces point to a woman that equates having a baby with giving up her life entirely. As a mutant that syphons off her own young, Louise not only gets to keep living, but she really lives – she has learned more languages than she can remember, she has homes in various European cities, she’s traveled the globe, and she has a spiritual understanding that many would kill for. She’s been an artist’s muse and has learned various trades. Louise is a woman that has seen and done things because she uses the process of conceiving to her advantage without having to raise her progeny. If she gives this up – by falling in love and carrying the embryo to term – then she lives a mortal life and dies. Right there, this is the struggle faced by so many women in the world: do I keep working and experience life, or do I stop everything and procreate? In one of nature’s cruel moments, women are given only a finite amount of time to bear children – this isn’t Evan that has to choose extending his life over having a baby. Socially – in many locations throughout the globe, though the Scandinavian countries are certainly turning this notion on its head – the expectation is that the mother does the bulk of the heavy lifting with raising children. After all, she’s the mother – she will carry the baby, and she’s hard-wired to want to nurse it and protect it. By snatching away the life force for herself, she’s able to extend her own life with possibilities for new experiences. By delaying becoming mother, she’s able to grow in ways many of us can only dream. 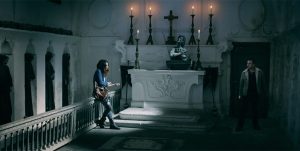 I visited this church before it was cool…

On the surface, this is a pretty depressing theme, but – and with me, there’s always a but – the that’s not the end of it. Louise may essentially cannibalize her children for spare parts on the genetic level, but this process lends itself to a greater point of maternity. The unique position of Louise demonstrates that, when given the chance to fully choose her time of readiness, she ultimately accepts the role of mother and therefore Evan. By not forcing her to have the child, she’s able to live the life she wants before she addresses her own mortality through reproduction. And really, isn’t the right timing – the right person, the right amount of life experience, the right conditions – the most ideal aspect to embracing the role of parent?