Warning: count(): Parameter must be an array or an object that implements Countable in /homepages/45/d96662078/htdocs/clickandbuilds/TheBackseatDriverReviews/wp-includes/post-template.php on line 316
↓
Home→Horror→Gone But Not Forgotten: The Great Monster of “Playtest” in Black Mirror

Full disclosure: when I first watched the episode “Playtest” of anthology series Black Mirror, I didn’t hold out much hope for the acting skills of Wyatt Russell. I’m generally cautious of second (and third) generation Hollywood because they’re not as good as their parents, and they get opportunities that could go to actors that are far superior in their skills (thanks a lot for the nepotism, Hollywood. I’m looking at the likes of Emma Roberts, Lily Collins, and Jaden Smith.). With Russell, though, I happily eat my words: halfway through this episode, I realized that he was acting and that I was completely buying his performance. Which made the subject matter all the more impactful, as the true horror of “Playtest” isn’t the large archnid nor the creepy house without internet access. “Playtest” is ultimately about the loss of the mind and selfhood in the age of shutting out human connection, opening up a broader discussion concerning quality versus quantity of life, especially in the name of entertainment.

The episode manages to loop nicely around the experience of losing selfhood to illness, beginning first with the context of his fear. When we first meet Cooper (Russell), he’s effectively fleeing his home life after the death of his father. The inference is pretty jarring: we only see one child in the picture of Cooper and his parents, and he states that he cared for his father after a diagnosis of early-onset Alzheimer’s, up until the man’s death. The horror of the situation is something we don’t directly see, yet it has impact throughout the rest of the episode. Cooper tells Sonja (Hannah John-Kamen) that, “Sometimes, he’d look at me and not know who I was.” Drink that in for a moment: this guy in his 20s has not only cared for an ill parent, but cared for a parent that did not recognize him and was essentially reduced to a scared child in front of him. I know adults in their 70s that can’t handle that type of responsibility, let alone someone so young that has dropped his entire life to watch someone slip away and die. As such, Cooper’s connection with his mother has faltered in the face of losing his father and self-described best friend, saying, “My mom, like I don’t even have that connection with her. I don’t even know where to start. So that’s why I left and went on this trip. Just to get away and make all the memories that I can while I can. And I know that I gotta talk to her… but not on this.” At that moment, Cooper, points to his cell phone. As the plot continues, he needs help getting home, but wont’ ask his mother. This is a man that would rather take an odd job in a strange country to earn money during a time of crisis rather than call his mother for help. That goes beyond the pride of asking for money – that’s someone who can’t wrap his head around a lack of connection, someone who has endured something so terribly painful that he can’t bring himself to go through forging that connection again. If you’ve ever dealt with losing a family member to a degenerative disease like this – and believe me, after losing my beloved grandfather 18 years ago to dementia (which did not kill him, but robbed me of the man I adored) – it stings. You’re scared of losing someone like that again. He knows that he needs to talk to his mother, yet won’t settle for something impersonal like a piece of technology. The connection is truly lacking, but he doesn’t want to make it even worse by speaking through a cold medium. 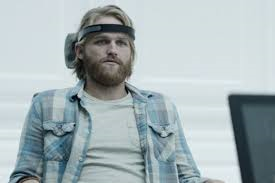 Oh, dude, the things that led you here…

Which makes sense that the software of the playtest focuses on the combination of that very fear coupled with the disconnect of interpersonal relationships that technology provides. Katie (Wunmi Mosaku, who, for the record, was fucking perfect in this episode with her clear, even voice) explains, “It will work out how best to frighten you, then adjust accordingly.” At first, we see a primal fear – a spider. Next, the school bully as a creepy character, followed by the hookup informing Cooper of a conspiracy, which leads to fears of actual physical harm. This culminates in the ultimate fear though: Cooper suffering the same fate as his father. Katie’s soft voice taunts him via questioning: “You thought you’d seen your mother. Your mother, can you describe her face? … What’s your favorite band? Your favorite ice cream?… You don’t know any of these things. Look in the mirror, behind you. Do you recognize yourself? Do you even know who you’re looking at? Soon, you won’t be anything. You’ll be just like your dad. That’s what really scares you, isn’t it?” Cooper begins to scream as she repeats that he’ll never see his mother again or travel, bringing in the final zinger with a healthy dose of guilt: “You deserve it. You should have called her.” What’s interesting is that once it’s revealed (at thist point) that this questioning is all in Cooper’s head, he can’t really fight it, repeating, “I don’t know who I am. I need to go home.” The machine is in his brain, and can’t be extracted. We feel relief when we realize that Cooper has just been subjected to a test gone wrong; we’re happy that we don’t have to watch this man lose himself the same way that his father did. We’re thrilled that he can go home and make amends with his mother. Except he can’t, because the whole thing has been playing out in his head over the course of .04 milliseconds. Interference from his mother calling him – the connection that he had avoided – causes a fatal seizure.

Oh, the places we can go from here. On one hand, this episode speaks to the pure hell of watching someone you love become a shadow of a human being in front of you; it’s the return to helplessness, the quantity of life far outweighing the quality in ways both horrifying and sad. It’s the loss of the self, the fear associated with being truly isolated and scared, even in your own mind. It’s watching someone you love become trapped inside of a meat casing, a special type of hell you wouldn’t wish on anyone. On the other hand, this episode speaks to the need to connect, and not necessarily in a good way. Arguably, Cooper is getting played by the entire gaming industry, which starts with his hookup with Sonja. His need for sexual release and romantic connection leads him to a woman that, under shady circumstances, asks him to spy on a company. His snapped picture leaves the phone on when it should have been turned off, which ultimately leads to his death. Likewise, if he had just talked to his mother, he could have saved himself the constant dodging of phone calls, rendering her own call in that instant less incessant – perhaps it never would have happened had he explained to his mother that he needed time to find himself after such a horrible ordeal. Then there’s the damning piece of technology: in seeking a more intense gaming experience, the good folks at SaitoGemu kill what we assume to be the latest in a line of participants, disposing of the body in calculated fashion with the results recorded in a sanitary lab report. Worse yet, this technology isn’t content to drum up a plotted scare: SaitoGemu’s technology will get into your brain, invade it, and render your life at their mercy… all in the name of a new high that will make you glow and get the blood pumping. 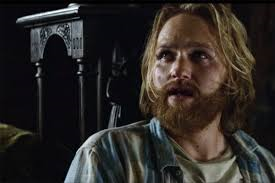 This entire concept is horrifying.

Put these pieces together, and that’s the true horror: in an unfeeling world where connections can be made without personal attachment, the worst threat is losing yourself. It’s the prospect of pain and loneliness, of not knowing who you are, of being at the physical and mental mercy of the trial and error process to create the new drug for the masses. But truly… aren’t we doing a great job of isolating ourselves on our own? And which is scarier: never making the connection to anyone, or making the connection and losing them?