Warning: count(): Parameter must be an array or an object that implements Countable in /homepages/45/d96662078/htdocs/clickandbuilds/TheBackseatDriverReviews/wp-includes/post-template.php on line 316
↓
Home→Child death→Hail To The King Vol 14. The Children of the Corn

“I could do without all of the Children of the Corn sequels. I actually like the original pretty well. I thought they did a pretty good job on that.” – Stephen King

On a cross country road trip, a couple stop for a bite to eat. They try to avoid the corn.

Author’s note: This is being written the day it was published, a “wet print” as they’d call it. The Star Trek: The Motion Picture of articles. So if there are any mistake mistakes, you can contact me by writing it down on a piece of paper, crumpling it up, and putting in the nearest bin. Don’t worry. I’ll see it.

Editor’s note: Daniel, don’t make me get the hose again.

We dip once more in to King’s collection Night Shift, not to be confused with Ron Howard/Michael Keaton/Henry Winkler effort. 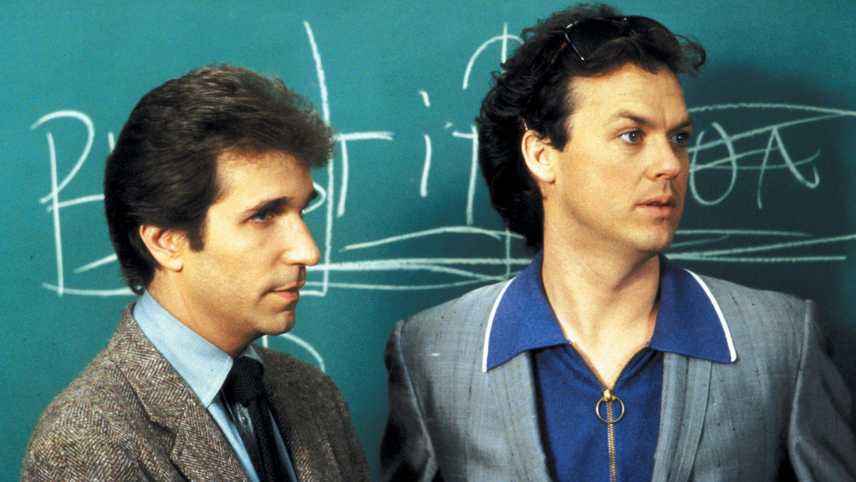 Burt is… a piece of shit. He and his wife may not be getting along, but he literally beats her at least three times in the first fifteen pages. They argue a lot before the story actually kicks into gear, but at no point do you care for them as protagonists. You sympathise with Vicky for the horrible situation she’s trapped in, but King writes her as shrill and therefore you can feel sorry for her but never get attached to her as a lead. They’re very thin central characters and this may be expecting too much from a short story, but King is usually good at infusing the most incidental characters with some personality. Here, the closest we get is that Vicky dislikes religion because of her childhood and comments on it literally every time the subject is brought up, while Burt is a seething with rage at everything that happens. They’re unlikable and you’re almost wanting He Who Walks Behind The Rows to get them sooner rather than later.

We return again to one of Steve’s major themes, religion. In this form, it takes on the dark worship of He Who Walks Behind The Rows, which feels like a southern Voldemort. For a visual comparison: imagine a congregation of people stood in rows in a church, with a priest at the front; the image in this story is inverted, with the rows of corn and the dark one, who is hidden at the back. This image is revisited in The Stand, when we see Randall Flagg in a corn field when he appears to Mother Abigail – I would assume that he is also the dark figure in this story. This town run by children has all the hallmarks of a Flagg-run society, right up to the public executions, and could well be what he was doing before he wandered down that road when Captain Tripps hit. The creepiest part of this whole story was the preacher on the radio. That felt like if they had turned the dial in the Texas Chainsaw van, then that would’ve come on. Made all the creepier by the fact that it’s a child preacher. Although, I have to admit, I was picturing him as Lil’ Gideon from Gravity Falls (Gravity Falls is a great show by the way, don’t let it being an animated Disney show scare you off. There’s a lot of quality there, especially for King fans of the weird.). The story itself is pretty tired ground in the evil kids genre. It’s sort of like The Midwich Cuckoos: The Next Generation. I do like how it takes place as this society of kids has already taken over and it’s just how things are. The mystery probably had a lot more to it upon original publication than in the modern day when we’ve seen these kinds of creepy abandoned towns with dark forces at their center. One aspect that is especially strong is how the story carries on after the main couple are dead – they aren’t special or going to be the ones to bring down the town. They try to fight and get killed, and life for the kids just goes on. It’s particularly evocative in the final scene when you have all the children who’ve turned 19 willfully giving themselves to the corn and being devoured because they have their faith.

The Stand – The small town of Gatlin is just next door to Hemmingford Home, the residence of Mother Abigail and the foundation of The Free Zone. 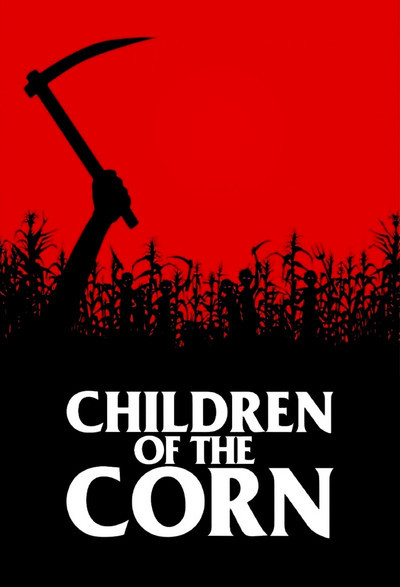 Right up top, this film is a lot more interesting if you think of it as a sequel to The Terminator, not only because it stars Linda Hamilton, but it also shows her survival skills and coming to grips with motherhood. In between crushing the first T-800’s skulls and having that picture taken in Mexico, this could be an adventure she has along the way. 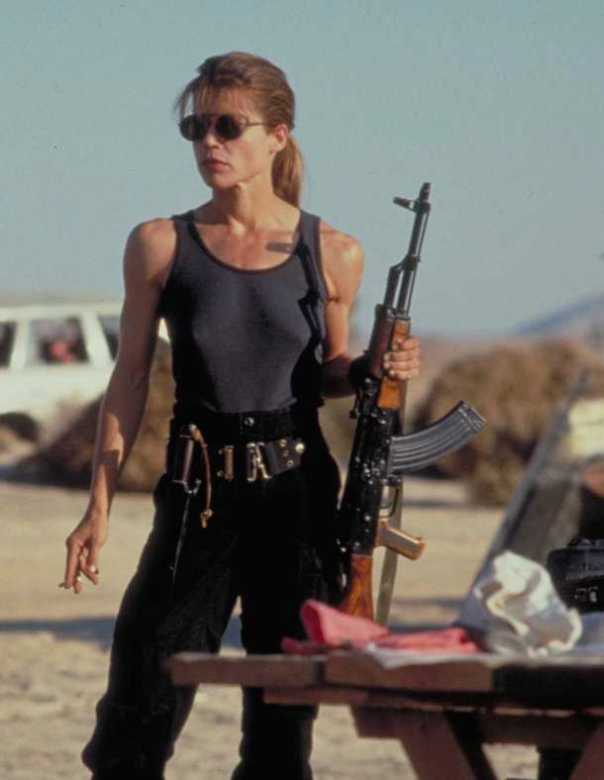 In her efforts to stop Judgement Day and prevent the machine uprising, Sarah Connor, now going by the name Vicky, is traveling with her boyfriend Burt, presumably to foil a Cyberdyne plant somewhere in the middle of Nebraska. It plays out as an us-versus-them story in that we get both sides of the conflict: seeing these creepy kids play dress and plot murder, and this hapless couple drive around for like an hour until they’re taken prisoner by the kids. The power structure within the kids is interesting as you see them proclaiming each other zealots and making power grabs. For a long time you doubt whether any of this dark lord stuff is true, and there isn’t something in the water. I think it’s what Jack Thompson feared would happen to kids who played the Grand Theft Auto games.

Time for some questions about this film….

Why are some of the kids just not in to the murderfest?

Why do these kids not simply run away from town and tell someone?

If the kids only took over recently, how has no one noticed yet?

Why is anyone listening to a ginger kid?

Why is anyone listening to the kid in that dorky hat?

Why do the “special” effects look like something from Space Ghost Coast to Coast?

Why does this film have “the end” credit? It just stops, no musical swell -Linda Hamilton takes a lesson from Kyle Reece and beans a kid using a car door and that’s the film. It’s a really weird final beat. 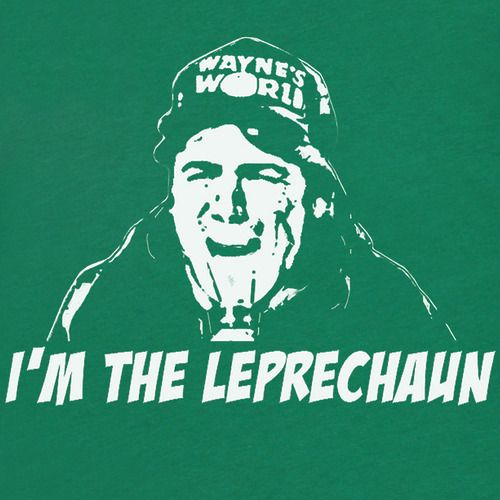 I haven’t seen any of the sequels, but I think they’re up to the ninth one now. Could Google it, not going to. So much like Hellraiser, they’ve become their own beast now. I didn’t see the latest installment up for any Academy Awards at the start of the month, so it’s safe to say they aren’t going to get David Fincher for the next one. This is the only extended horror movie franchise I’ll get to cover in these articles, and it’s one of the (presumably) worst ones. You have your Friday The 13ths, which is personal favourite long running horror franchise – it’s in the same category as your Nightmare on Elm Streets or Halloweens. Then we getin to the murky waters of the straight-to-video ongoing sagas, such as the Leprechaun films, which have been to Vegas, space, and twice to Da Hood; Hellraiser, which at this point is homaging (because I’m being polite and don’t fancy getting sued, although I will say it’s almost a year on and not a peep from the Koontz estate so think that one slipped by) other films such as Jacob’s Ladder and Leprechaun 4.

The ending is the big difference here, as the the film has a much more hopeful outcome as the characters get away to defeat that T-1000 a few years later. Whereas the book, in almost trademark King style, ends with a much more bleak, “everyone’s dead because the world is fucked” ending. In defence of the film’s ending, you couldn’t have made those eight (googled it) additional sequels. The short story was much less concerned with having a film dynasty that would last almost 30 years. The short story ties in much more with the religious cult that you are slowly introduced to through the writings the characters find and the state of decay in the town. The film presents more power struggles within their group, so rather than it being the dark one getting inside all of their minds, it seems that Issac is much more in charge and loses control of his murderous flock. This would explain why the corn is burnt at the end.

The sequel I want to see is Children of the Corn: Subsidised. No murder, just He Who Walks Behind The Rows hanging out in the local bar, complaining about how big companies put him out of business. Not dissimilar from the movie Nebraska.

Overall, the short story is more impactful as the characters who are having their own issues come across a far greater evil and is devours them. There is no safety from these things in the world, which is a theme that runs through classic King works in that if the monster is going to get you, it’ll get you… unless there are seven of you and you team up with a murder Turtle. It’s this type of nihilism you find littering King’s early work, and it’s the stuff that is the most powerful as characters aren’t automatically safe.

Next Time: We talk about The Prodigy