Warning: count(): Parameter must be an array or an object that implements Countable in /homepages/45/d96662078/htdocs/clickandbuilds/TheBackseatDriverReviews/wp-includes/post-template.php on line 316
↓
Home→Animated→Happily Ever After: Toxic Fairy Tale Expectations in Shrek (2001)

True story: the first time I took the father of my kids to see Shrek (2001), while we were still dating, he laughed so hard at the exploding bird scene that I really thought I was going to have to take him out of the theatre. He cried and slapped the seat in front of him and couldn’t catch his breath. It was kind of amazing, as neither of us was expecting his reaction to be that extreme (it’s the shaking, smoking bird legs that does it every time). You know what is pretty extreme, though? The expectations of both Lord Farquaad (John Lithgow) and Princess Fiona (Cameron Diaz) in Shrek. Between their physical appearance hang-ups and compulsive need for a fairy tale ending, they personify the everything that’s wrong with expectations of how life is supposed to be. 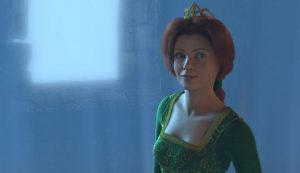 You spunky, toxic lady, you.

Starting with Lord Farquaad, this is someone who exists with the running gag of Short Man Syndrome. Now, let’s be real – being short isn’t the worst thing on the planet, and short guys take a lot of crap for something they can’t control (short guys, you have a friend in me). Where Farquaad gets into trouble is the notion that he must somehow compensate for his lack of height through tyrannical rule. This compels him to round up every fairy tale creature and relocate them. On top of that, the general atmosphere of his kingdom isn’t exactly full of love and acceptance: the magic mirror is afraid of him, he’s skinned Mama Bear for a decoration, the town resembles a hellishly cheerful amusement park (if you dislike Disney as much as I do, this aspect is all too real), and he’s picked a hot bride purely to remain in power on a technicality. He’s a lord that wants to be king, and he feels so entitled to that fate that he subjugates an entire kingdom to the point of fear and genocidal tendencies because he can’t cope with the fact that he doesn’t look the part. 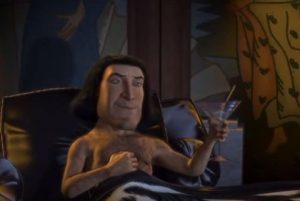 Then there’s Fiona, who isn’t much better. Her parents locked her in a tower because she turns into a heavyset, green woman at night; she fantasizes about the day when someone will kiss her and magically make her into a conventionally beautiful princess at all times. When we first meet her, she’s too hung up on the mechanics of her rescue to experience actual happiness that someone took the time to come rescue her. Fiona can’t relish in the fact that someone wanted her when her own parents didn’t because she’s holding onto the hope that someone will make her body image issues go away. When Donkey (Eddie Murphy) finds out that she turns into an ogre at night, she expresses severe disappointment that she’s not the conventionally pretty princess she believes she needs to be to achieve happiness – per Fiona, she can only accomplish this goal if she’s pretty. There’s only one path to happiness, and it doesn’t involve being an ogre. 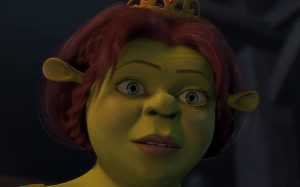 The problem with Lord Farquaad and Fiona both comes in the form of acknowledging their strange complexes: these two have been brainwashed to think that they somehow must undergo a certain course of action/appearance to attain the dictated outcome of a fairy tale rather than focus on what makes them truly happy.  Lord Farquaad can’t look around at his kingdom and see the positives because, in his mind, short people don’t get to be king. He’s not focusing on how he came to power, or if he could be a beloved ruler who has a sense of humor about himself, or if his people are happy – he demands, in his words, “perfection”. For an imperfect person, it’s a pitying level of self-torture until you realize that he’s rounding people up and putting them into camps because he needs a step stool to reach the top shelf (I need one. No shame.). As for Fiona, she not only places unfair body expectations on herself, but on Shrek (Mike Myers) as well – after all, he’s that same body type, and there she is bemoaning that it’s not attractive. And this is the person with whom she’s supposedly fallen in love. Their final spoken interaction is telling: she tells him, “I don’t understand. I’m supposed to be beautiful,” and he replies, “You are beautiful.” Shrek sees the real Fiona and thinks who she is, at her core, is just fine and worthy of a lifetime together, but she just sees an outer shell that repulses her. In her mind, she’s entitled to someone who looks like her and is conventionally handsome, and I’m calling total balls right here. Frankly, if someone ever says they love you in spite of how you look, you should dump their ass immediately. If they make comments about being able to see past your flaws, in the words of Dan Savage, dump the motherfucker already. Find yourself someone who appreciates you and takes joy in you, not someone who says, “Eh, good enough.” You’re entitled to what you put out in the world, not to what someone deigns to be so. 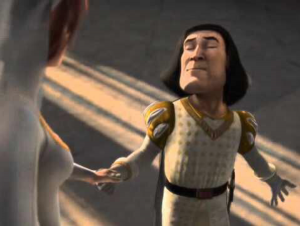 Is this really worth the price of admission?

I openly admit that this is a fun movie, but I feel sort of sad imagining this film if each of the characters had let go of their hang ups and just focused on being happy the way they were rather than clinging to the odd stereotypes. What if Farquaad had embraced his height? What if Fiona was more accepting of the way she looked at all times of the day? Such as with real life, this isn’t how the story pans out; however, that can’t stop us from injecting a dose of reality into our everyday experiences. The focus should be on liking who we are, not looking where we think is up to where the pretty people are.