Warning: count(): Parameter must be an array or an object that implements Countable in /homepages/45/d96662078/htdocs/clickandbuilds/TheBackseatDriverReviews/wp-includes/post-template.php on line 316
↓
Home→Comedy→Weekend Movies: Five Reasons to Watch Ingrid Goes West (2017)

I don’t know about you, but I’m pretty on the fence with Aubrey Plaza. On one hand, she’s effective in her roles as a smartass that doesn’t care what you think. On the other hand, she’s a little too good in that role, and I want her to branch out and do something different. Luckily, Ingrid Goes West (2017) – the story of unstable Ingrid (Plaza), who moves to Los Angeles to stalk her Instagram idol, Taylor (Elizabeth Olson) – is here to give us a bit more range on her. Here are five reasons to watch it this weekend. 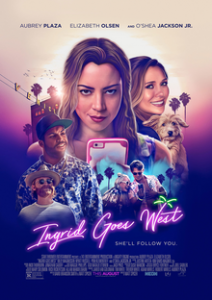 I am the first to admit that I love me some Instagram. I like pretty pictures, okay? That being said, the app makes it easy to portray a life that doesn’t exist, so you have to take it with a grain of salt. Okay, a boulder. Chances are, someone posting a picture of a perfect meal isn’t really enjoying it; someone streaming their engagement doesn’t want you to know about the fact that there’s been at least 14 fights this month about a continued friendship with an ex-girlfriend; someone’s wonderful vacation might be hiding extraordinary debt; and no, they haven’t read that book, because they can’t read beyond a fourth-grade level. Some have tons of followers but few friends. You never know what lurks behind the perfect picture, and it’s best not to base your life goals on a couple of pictures. This film makes sure to shine a light on that aspect.

Obsession can take many forms. For some, it’s online entertainment and gaming; for others, it’s monitoring the goings-on of different people. Me? Makeup (come to me, MAC cosmetics…). There’s a fine line between appreciation and flat-out obsession. The obsession we witness Ingrid descend into is both pitiable and fascinating: we can see exactly how she got there, but we also want to tell her that what she’s doing isn’t healthy. The writing makes the transition seamless, especially when Ingrid gets competition for Taylor’s attention. 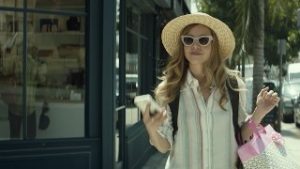 Fine line between flattery and scary.

Oh I am so glad that this aspect was covered in the film. There are several points where social slights come up, with two standouts: at the beginning, when Ingrid isn’t invited to a wedding, and when Ingrid gets blown off by Taylor to go to a party. Now given, we know that Ingrid has some emotional problems, but from her side, not taking into consideration what we know about her emotional stability, the actions seem kind of crappy. And in an age where people can broadcast what fabulous, exclusive thing they’re doing on social media, the impact is one of projecting exclusivity. Which, well… when Ingrid voices over that she latched on to someone due to that person being the only individual who expressed sympathy when her freaking mother died, we can see why she’d build up the relationship. It’s not right, but it makes sense when you consider the sheer levels of isolation coupled with the fragile mental state. I’m not saying that everyone deserves a slot, but I am saying be mindful of what you’re advertising. People tend to offer less support when they get hit in the face with how low they are in priority.

Note: all bets are off in this department once we hit the last 20 minutes of the film, but still.

Taylor is an Instagram influencer who hasn’t cracked a book; her husband, Ezra (Wyatt Russell), is a hipster artist that doesn’t really sell his work; her friend Harley (Pom Klementieff) is a fashion designer that specializes in rolling her eyes; her brother Nicky (Billy Magnussen) is a deadbeat that just sort of shows up and converts oxygen to carbon dioxide in between drug binges (sidenote: this has nothing to do with his addiction; he’s be a craptacular person to hang out with sober). Listening to each and every one of these people makes me want to harm myself. Which means that they are the absolute perfect parody of what they represent. Check it out if only for that. 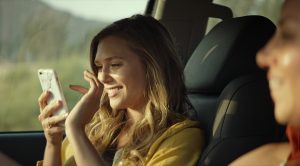 Finally, a movie that plays to my dislike for Elizabeth Olsen.

Hats off to Bryce Fortner, the cinematographer on this film. There are so many shots that look like the prefect picture, which totally fits into the film’s plot and themes. Fortner has worked on Portlandia before, so he’s no stranger to comedy either. If nothing else, take a few minutes to relish in the beauty of this film.

Ingrid Goes West is available for streaming on Hulu.