Warning: count(): Parameter must be an array or an object that implements Countable in /homepages/45/d96662078/htdocs/clickandbuilds/TheBackseatDriverReviews/wp-includes/post-template.php on line 316
↓
Home→Comedy→Heinous: Revisiting Bill and Ted’s Excellent Adventure

Children of the 80s experience a weird feeling every time we try to inflict our favorite films on our children: we’re hit with this wave of realization and revulsion that maybe, just maybe, our childhood classics have some themes and moments that do not fucking fly in the modern age. Hence, we get the sexism in Monster Squad and the racism of Sixteen Candles. There are so many more that I could name here, but I won’t because, well, it’s depressing how the market only catered to, shall we say, a certain demographic. You know damn well what I’m talking about. 1989’s Bill and Ted’s Excellent Adventure is no exception to this. I know what you’re thinking: do we really need to talk about this? Yes, we do, so you can either get out of the phone booth in the Middle Ages, or you can stick with us through something unpleasant. 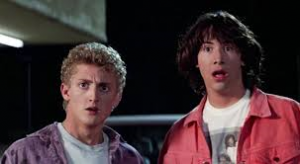 Still there – nice. Okay, so, the elephant in the room: Bill (Alex Winter, who, surprisingly, went on to become an award-winning documentarian) and Ted (the never-aging Keanu Reeves) have a surprising moment of homophobia in the film that completely throws us off guard upon rewatch. They drop the word “fag” in a manner that is so casual it was easy to miss in 1989: it’s played for a laugh, and it barely registered in memory, if at all. When you watch it now, you stare and gasp. It’s not meant as something sweet or as a term of endearment: it comes when the boys share a hug, as though the mere thought of either of them expressing any form of physical attachment – no matter how platonic – is a threat to their fragile sexual identities and egos. The instance where this happens: Bill thought his friend Ted had been stabbed to death, and was bubbling with rage until everyone’s favorite goofball popped up with his winsome smile. It’s a moment of honest-to-goodness male affection that we don’t get to witness in popular culture, especially not in 1989, and it didn’t involve punching to show each other they cared. In this respect, their hug had the potential to transcend the stereotypical toxic suppression of emotions, but it veers to the right in an extreme moment of being the fear of it being perceived as romantic interest. Because that’s apparently the only reason why you hug someone: you’re just trying to fuck them. Back then, it wasn’t such a huge deal to see that kind of casual homophobia, but the problem is that in its casual attitude, it bred the notion that guys can’t show emotion without being labeled gay. It normalized something pretty crappy, and that’s not something we should take lightly. You can scream, “Lighten up, it’s just Bill and Ted!” all you like, but the fact remains that if it’s out there and treated as a joke, someone is going to see it as normal. As part of the LGBTQ+ community, I can assure you that shit like that makes it so much blurrier when it comes to people tolerating crap like this, and it becomes far easier for more severe homophobia to start in.

Swords at the ready.

The problem, though, is that aside from the homophobic slur and perpetuation of toxic masculinity, these guys are fairly likable. Make no mistake, Bill and Ted are complete morons, but they possess a sweet loyalty to one another and a need to make life better for others – one that echoes through both the original film and the sequel, Bill and Ted’s Bogus Journey (as well as the homophobia, but there’s only so many hours in the day). It’s not enough that the pair kidnaps historical figures in a bid to pass their history class: they joyfully wish to show others their world, because they’re super stoked with the world around them. They’re not great at music, but they keep trying, much like when we want to tell those around us to not give up on their dreams. Bill is beside himself when he fears Ted is dead, demonstrating a deep sense of caring and attachment; we want our best friends to freak out like that at the thought of our death. When they encounter the princesses, they save them from unhappy arranged marriages, then fret in the next film about their quality of life in a type of critical thinking that goes beyond their wants and desires to weigh the overall happiness of a loved one. Their legacy becomes one of world peace and love, which creates a DayGlo/Mega Bloks utopia. They’re goofy, fun, loyal and laughably naive and dumb, which makes them enjoyable and easy to be around. 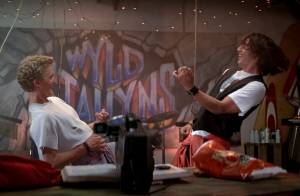 Which, strangely enough, makes for a spot-on parallel to the problems we’re now encountering in our society in terms of reconciling poor actions with the people we hold dear. No one wants to see a hero, friend or loved one fall from grace, but when they do, we’re left wondering where to go and if they can ever be welcomed back into the fold. Point blank, we want so badly for things to be either/or when there are tons of gray areas and room for growth. It’s easy to watch a film like Schindler’s List and peg the overt anti-Semite who takes glee in torturing people as the bad guy; it’s much harder to call out that behavior when it’s someone we otherwise like, who isn’t exhibiting the behavior all the time. One of the easiest ways to address the discomfort we see is to shrug and say, “Well, those were the times” or “It only happened once.” However, some of those times were pretty recent. It’s a lot easier to dismiss some of the crap from Gone With the Wind than it is Bill and Ted’s Excellent Adventure because we don’t have to look those marginalized people in the face and mock the suffering an antebellum-era person of color endured by means of our indifference; we can simply brush that off because we’re using the excuse that it was from a different era. Does that sound bad? It should. While you watch a film like that, it’s normal and fine to now view it through the lens of being appalled at the racial relations displayed – that’s evoking a reaction to the attitudes of the time. Where it’s harder is when you have a closer relationship with the material, such as it stemming from your childhood, and that’s where Bill and Ted comes in. As 80s kids, we latched onto our films – it was a babysitter for quite a few of us. We feel a kinship to it. We get defensive when it’s questioned, because it feels like a betrayal toward someone or something we love. It’s way easier to defend your casually bigoted grandfather than it is to defend [insert homophobic politician du jour here] because your grandfather holds the emotional connection, and we want to defend those we love. If your grandfather was the one taking you to baseball games as a child, it’s way easier to create a stratification of injustice because it’s just a comment, and we don’t want to think about how much damage something like that can do. So how do you approach someone with whom you have that history, who holds some gross views? Can you still love someone who throws around “fag” after a same-sex hug as a gentle put down to the other’s masculinity? At what point do we say that something is harmful, and when do we decide to watch someone grow versus cut our losses?

The answer, I hope, lies in the upcoming sequel. As the older versions of Bill and Ted, I hope that Winter and Reeves campaign to bring a side of compassion and reconciliation to the future endeavor. How beautiful would it be for audiences to hear those two say, “I used to put people down using gay as an insult. It’s hurtful and wrong, and I’m sorry I ever did that.”? Would it forgive everything? No, but the journey toward a better world starts with self-awareness and some uncomfortable conversations. It starts with saying, “I did something wrong, and I’m sorry. I’m going to change.” And we have to let them try to change. Especially if it’s someone we know, who we want to find the way.