Warning: count(): Parameter must be an array or an object that implements Countable in /homepages/45/d96662078/htdocs/clickandbuilds/TheBackseatDriverReviews/wp-includes/post-template.php on line 316
↓
Home→Hell in a Handbasket→Hell in a Handbasket: The Handmaiden Edition

I haven’t done one of these in a long time, and had pondered a few other contenders in a bid to get back to the basics. But then… Park Chan-wook’s The Handmaiden happened. I wanted to like this one. I had heard so many positive things about it: it was supposed to be the psychological thriller. It’s directed by freaking Park Chan-wook! His track record is fantastic, he knows how to frame a shot, he doesn’t shy away from bloody revenge, and he can pull a twist with the best of ‘em. So imagine my surprise when I decided an hour and a half in that I hated this movie but was going to watch it until the very end. Some stuff, you just wait to see if there’s a payoff. 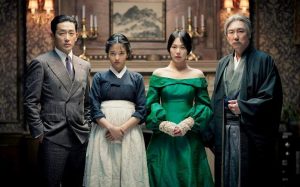 Try not to look so enthused, gang.

Considering what Park accomplished with this film, it’s hard not to be intrigued: he took an British novel (Sarah Waters’s Fingersmith) and translated it into Asian culture. Fingersmith is part of a series of novels that explores intrigue, social class and crime in Victorian England. Park not only takes the plot elements of this novel, but manages to adapt it to suit the frame of Victorian life in Korea/Japan, in everything from vestiges of imperialism to lingering social inequality to the seedy underbelly of a heavily gentrified population. Plot-wise, it chronicles the attempts to swindle Lady Izumi Hideko (Kim Min-hee) by professional criminals Sook-hee (Kim Tae-ri) and Fijuwara (Ha Jung-woo) out of her massive fortune. Along the way, there’s a creepy uncle (Cho Jin-woong), a lesbian romance, and a backdrop that’s beyond colorful and lush. 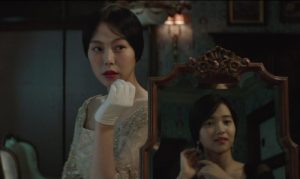 That backdrop, kids, is as good as it gets for someone who hates movies that don’t know how to pick up the pace. I get it – some people dig slow burners. I, however, do not, which is weird coming from someone who appreciates the intricate layers of cinema. The simple truth is that this movie is like watching fucking paint dry. It pains me so deeply to say that, because it’s really such a gorgeous piece in everything from the sets to the patterns of speech to the gorgeous cast (anyone who thinks Asian actors aren’t attractive really needs to see this movie because the cast is beautiful and sensual). Can’t run from the truth, though: this film features a long con in several instances, and it feels like we’re playing that long con out with every passing day. It goes from curious to tedious gradually as you’re waiting for something to happen. Yes, there’s plot going on – Fujiwara is a creep! Uncle Kouzuki is abusive and totally that weird uncle you were never left alone in a room with as a child! There’s a ton of money at stake! What the hell is going on with trapping people in a nuthouse?! – but the film has trouble getting moving. That’s really the largest issue I have with this film: it can’t manage to shift into gear for quite some time. 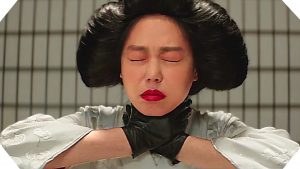 Me, at the one hour and thirty minute mark.

Here’s a harsh spoiler in this film: we get three lesbian scenes – each one contained in one of the film’s three parts – and it feels as though the film rests on doling out these scenes to make up for the fact that it’s slow as fuck. The first one is tasteful and subdued: we don’t get to see the ins and outs of Sook-hee and Hideko having sex. The second sex scene comes during part two, wherein we get what a total pig would call “the good stuff” – various positions, with a scene lasting multiple minutes. This isn’t a quick glimpse like the first take on the scene – we get the extended version. I half expected Lionel Richie’s “All Night Long” to play as we watch these two women fuck, because it felt like it kept going and going ala Blue Is The Warmest Colour. Now I’m no prude by any means (oh, the stories I could tell), but there comes a point where you have to ask yourself if you’re showing something onscreen to further the story, or if you’re showing something onscreen to get someone talking about your film. Case in point: the sex scene Park gave us in Oldboy. That was integral to the plot; while this one may have been as important to show these two women falling in love and having mind-blowing sex, I don’t think I needed to see as much as I did. Sometimes, what you don’t see is as much of a turn-on as what you do see. 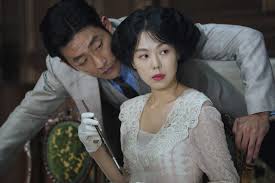 That dress is far more alluring.

Most damning for me is the fact that this film does not kick into anything resembling second gear until well after the midway point. This second major sex scene comes an hour and forty minutes into the film. An hour and forty minutes out of a two-hour and 25-minute film. At that point, it definitely felt like a consolation prize: here you go, kids – you’ve been good, so we’re going to give you hot lesbian sex as a reward for sticking around. After that, we get the major double-crosses, then the revenge of the funny uncle, including major torture in a literal underground lair. Oh does this feel like a train wreck in that it attempts to cram in as much story as it can into the remaining 45 minutes. By the time we get to the torture, Park doesn’t show us that much, with the exception of a few genitals in glass jars. Under normal circumstances, I’d be cringing (because that penis or vulva had to come from somewhere), but I was so bored that I didn’t care. 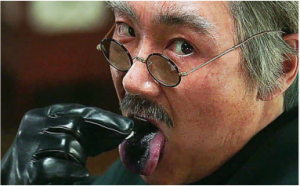 When I shrug at two folks getting it on or someone getting his hands chopped off, you’ve done your job poorly. I love Park Chan-wook, but The Handmaiden was such a misstep for me that I need to go bury myself in Oldboy for a while and forget that this one happened. I wanted to like it – it was pretty, it had potential, and it was in capable hands – but I just couldn’t. Some cars are way too slow to be driving on the expressway.