Warning: count(): Parameter must be an array or an object that implements Countable in /homepages/45/d96662078/htdocs/clickandbuilds/TheBackseatDriverReviews/wp-includes/post-template.php on line 316
↓
Home→Horror→Weekend Movies: Five Reasons to Watch I Am The Pretty Thing In The House

Yeah, yeah – I know that I just griped to high hell about The Handmaiden, but you’ll get over it because I already have (we bounce back quick around here once we’ve had the chance to rage. Except for Lust, Caution and The English Patient – seriously, fuck those movies). Full disclosure: I watched I Am The Pretty Thing In The House while home sick, curled up on my couch, hoping that it would somehow scare the nausea out of me. While it didn’t do that precisely, I did find it atmospheric and enjoyable. Here are five reasons to watch it this weekend. 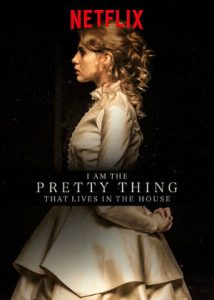 While I dig gore, I’m getting pickier about it as I age, and I’m not alone in this. I don’t mind seeing someone getting a face ripped off, but just make sure that it’s relevant to the plot. Don’t show me something just because you had extra corn syrup lying around. Make it count. What’s refreshing about Osgood Perkins’s film is that he knows when to look away – the audience is left to wonder what’s lurking, and we’re expecting the worst, therefore manufacturing the worst possible outcome. Which is worse than anything Perkins could show us.

What I just said above rings true here. You start wondering when you’re going to see something, whether it’s a blood stain or a hallucination. You start wondering if something is going to move when you’re not looking. You wonder if the old lady with dementia is going to snap and start chasing around our caretaker, Lily (Ruth Wilson) with an axe. You get paranoid. And just like that, you’re sucked in, looking for little clues, getting jumpy. It’s a great way to place yourself into the perspective of someone who lives in a haunted house. 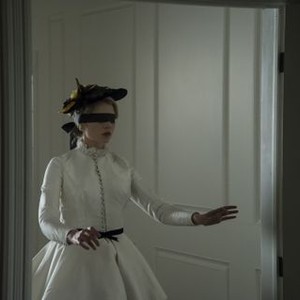 No, not creepy at all.

Oh do I love this take on death and a haunting. There’s this weird notion that all ghosts are out to kill us. This one presents the idea of death being something that leaves a scar on this plane: it’s something so traumatic that it leaves behind an imprint. I love this idea, because it places the onus of fear on those who sense the ghost. The ghost herself is sad and trapped, not vengeful. It’s a bit refreshing.

I’ll concede that Wilson’s Lily needed some work as a character. She was a bit of a fraidy cat, and that gets old after a while, especially with the antiquated language she uses. However, Wilson had the absolute perfect voice for this role. Her whispers and pleadings are made more effective by the meek tone and softness. I’d be interested in hearing her read Dolores Claiborne, if we’re being totally honest. Call me curious. 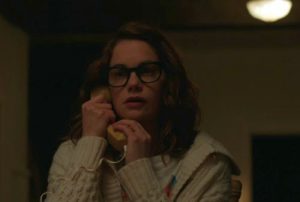 The concept of this film has some claustrophobia hidden in plain sight: in an isolated farm house, a 28-year-old nurse cares for a dying woman who can’t remember anything or take care of herself. Caring for someone with dementia is never a picnic, but doing it completely solo as this person is dying in a house with no other company? That’s loneliness on a different level. It’s enough to make a person wonder if they’re going to start making things up or seeing things to entertain themselves… which calls into question the trustworthiness of our narrator. Definitely something to think about.

I Am The Pretty Thing That Lives In The House is currently available on Netflix. If you’re looking for something outside of the slasher genre, give this one a shot.