Warning: count(): Parameter must be an array or an object that implements Countable in /homepages/45/d96662078/htdocs/clickandbuilds/TheBackseatDriverReviews/wp-includes/post-template.php on line 316
↓
Home→holiday→I’LL TAKE IT! Impulsive Pet Ownership in Gremlins (1984)

In the words of Thomas Sanders, story time: so I first showed my kids Gremlins (1984) five years ago. There they were, sitting on the couch – ages 8 and 5 – all bundled up in their blankets with a huge bowl of popcorn between them. And then they started SCREAMING at the television in an effort to save Zach Galligan’s Billy: “Billy, DON’T OPEN THAT DOOR! DON’T GO IN THERE! IT’S IN THERE! IT! WILL! KILL! YOU!” I sat there in complete shock at my kids losing their shit at the television. And one thought occurred to me: all of this could have been avoided if some moron hadn’t impulsively bought a pet for a Christmas present. 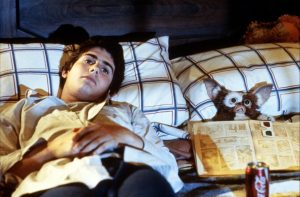 The whole thing starts off innocently enough: Randall Peltzer (Hoyt Axton) is looking for a present for his son Billy for the holidays. He walks into a small shop in Chinatown, where he expresses interest in a small creature called a mogwai. The shop’s owner – known only as Grandfather (Keye Luke) in this film – refuses to sell the creature, warning Randall that he’s not up to the task of caring for a mogwai. Luckily for Randall, the elderly shop owner’s grandson (John Louie) decides to make a quick buck and sell the mogwai to him. Because it’s hard out there around the holidays, and you gotta get that cheddar, amirite? 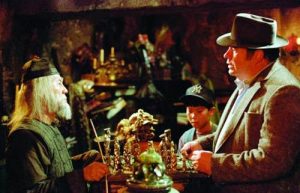 “I don’t care if he’s kept a tamagotchi alive for six months! It’s not for sale!”

Turns out, Grandfather was beyond right: the Peltzers are not ready for a puppy, let alone an exotic creature that requires simple instructions and common sense. There are three basic rules: don’t expose it to bright light, don’t get it wet, and don’t feed it after midnight. These are not difficult rules of responsible pet ownership, yet Billy manages to pooch every single one of them (bad pun stays). He shines bright light onto poor little Gizmo (who is cute as a freaking button), who shivers in terror and pain. He spills water onto the poor thing, giving us the worst birth scene since the home video used to scare the crap out of expectant moms at the Lamaze class I attended (DO NOT WATCH THE AFTERBIRTH PART). Most damning: the crafty little buggers trick Billy into feeding them after midnight, with the end result of creepy pods in the attic, then eruptions of reptilian creatures that have to destroy everything in sight. All because Randall couldn’t take no for an answer, and some kid saw a chance to make some extra money. 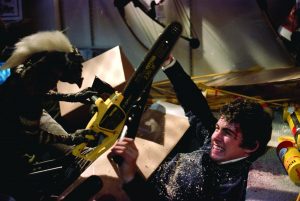 This could have been avoided, but nooooooo….

People, this is a fanciful example of why you shouldn’t give a pet as a present. As much as I hate to agree with PETA, this is just a bad idea all around. Even vets agree that this is bad: it shouldn’t come as a surprise, and the chances of winding up with a little creature from a mill are too high for my tastes (the resulting health problems alone are criminal, not to mention the practice of breeding something in an unhealthy, too-frequent fashion). Then there’s the sad fact of animal abandonment, a practice whose numbers vary from location to location. The consistent thing about that: impulse decisions lead to poor care, which has a higher rate of dropoff at a shelter. Which isn’t good for anyone, let alone the animal. The kicker here is that Gremlins gives an extreme example as to why you need to think about taking on a pet, especially one with special needs: Randall gets wrapped up in the cute little animal that no one else has, without thinking through if his son is responsible enough for the task. He lets a novelty trump any warnings concerning the health and safety of those around him because he wants his kid to have a really cool Christmas present. No wonder Grandfather shows up at the end and takes back Gizmo – Randall’s lack of common sense and Billy’s inability to care for Gizmo appropriately cause considerable damage, including death. Extreme, but a really good example of why you should think through your purchases.

Listen, I love puppies – I want one so badly I can taste it. But if you don’t assess whether you’re up to the task, you’re doing everyone a disservice, especially the animal. So instead of buying that cute little surprise St. Bernard this holiday season, consider donating to one of the many charitable causes that help the animals – from horses to bunnies to dogs to rescued hawks – that could use the help. And if you absolutely have thought this through, adopt. Just make sure that you can keep it clean, fed before midnight, and away from lights too bright.