Warning: count(): Parameter must be an array or an object that implements Countable in /homepages/45/d96662078/htdocs/clickandbuilds/TheBackseatDriverReviews/wp-includes/post-template.php on line 316
↓
Home→Comedy→Weekend Movies: Five Reasons to Watch While You Were Sleeping (1995)

Ho ho ho, peeps. Yes, we’re officially into the holiday season. What better way to celebrate than to watch a feel-good romantic comedy? This year, we’re going to give Love Actually (2003) some time off – I figure that we’ve beaten that one up for some time. Plus, you’re most likely looking for some new material. This year, we’re going to start it off right with a look at the charming romantic comedy While You Were Sleeping (1995), about a lonely woman named Lucy (Sandra Bullock) who saves the life of Peter (Peter Gallagher) and accidentally winds up being welcomed into his family via misunderstanding. Here are five reasons to watch it this weekend. 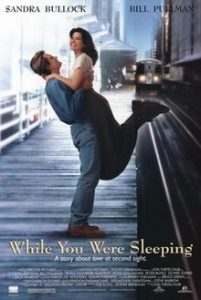 Lucy has spent her days watching Peter and building up a wonderful backstory for him. She sees a handsome, put-together man and, in her loneliness, imagines that he’s a sweet, romantic, respectful man that could sweep her off her feet. In comparison to her life – she doesn’t have family, she doesn’t have friends, and she works a quiet, mind-numbing position taking train tokens for the Chicago Transit Authority – the fantasy is what keeps her going through her days. While arguably unhealthy (okay, fine, the events of the film can be read as creepy, awkward and wrong), anyone who’s a spent time as a timid daydreamer will see a shred of themselves there.

#2 –The family you always wanted

Peter’s family is awesome. He’s got a cute little grandmother (Glynis Johns) that loves Lucy. His grandfather (Jack Warden, who was a movie staple for me as a kid – thanks, Used Cars [1980]) knows the truth, but really likes her and wants his family to be closer as the result of her infectious likability. His parents are charming, and welcome her with open arms. I know people who have horror stories for families, and trust me when I say that the Callaghans are a sweet deal. Watch them and love them, because some people have it way worse. 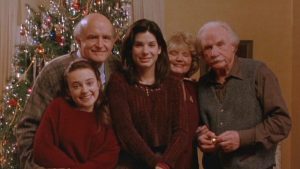 Get that family, Sandy!

#3 – Pullman and Bullock have great chemistry

Chemistry is a hell of a thing. When it’s bad – when two actors just don’t click, no matter how sweet the paycheck – it’s wicked obvious. I’m look at you, Scott Pilgrim vs. The World (2010), and your loveless kiss seen ’round the globe. However, when it’s done right, chemistry can be charming and will make you think that love is not only possible, but that it can happen to you. That’s precisely what Pullman and Bullock do in this film. Hell, Bullock made a career out of being charming. She’s able to transfer that chemistry to the actors playing opposite her, which can be tough when you factor in that you don’t always have an immediate clicking with someone. Watching her in the film that put her on the map in this type of role really helps remind you of that magic she brings.

I get strangely excited for Turtletaub movies because they are a buttload of fun. National Treasure (2004). The Meg (2018). The racially *ahem* offbeat 3 Ninjas (1992). He’s known for the action and the cheese. While You Were Sleeping was one of his two forays into romantic territory, the other one being Phenomenon (1996) – which we’ll promptly forget because no one wants to really remember the years when lightning strikes/shiny objects were plot devices. The important thing here is that this film defies all logic in its plot, which is a total hallmark of a Turtletaub film. The more incredible part: it all seems like a good idea at the time and makes complete sense. It’s like a friend persuading you to steal a street sign when you’re drunk at 3 AM – it sounds great at the time, even if you’re not sure how it happened in the morning. 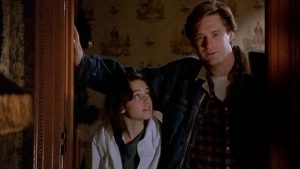 There is something about a happy ending that is so needed right now. That’s the beauty of a good movie: it will make you forget how simply atrocious the rest of the world is for a little bit. That’s needed sometimes, so that you can pick up the sword again and go fight the good fight. So recharge with this film. We’re going to need it in the coming months.

While You Were Sleeping is available for rental on Amazon.