Warning: count(): Parameter must be an array or an object that implements Countable in /homepages/45/d96662078/htdocs/clickandbuilds/TheBackseatDriverReviews/wp-includes/post-template.php on line 316
↓
Home→Horror→Is The Forest Guilty of Cultural Appropriation? A Debate

At its core, The Forest is a horror movie. Horror movies have been in the midst of some of their own issues lately: not enough new material; sexism; poor acting quality (so tempted to name names here, but I won’t). Every so often, though, we come across a different issue: the meeting between two cultures, which spurs the debate of whether or not the film in question is guilty of cultural appropriation in some form or another. So, does The Forest do this? 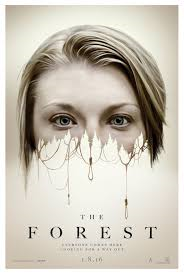 The great debate of the evening.

Since this is a touchy subject, let’s start with some definitions and background. In her article, “What Is Cultural Appropriation and Why Is It Wrong?”, author Nadra Kareem Nittle unpacks something pretty hefty into terms we can process. 1 Nittle sums it up succinctly: “cultural appropriation typically involves members of a dominant group exploiting the culture of less priviledged groups – often with little understanding of the latter’s history, experience and traditions.” The largest problem with appropriation is the removal of the rich history of a culture to suit the needs to the dominant power – it’s picking what you like and placing it in your own context rather than honoring the traditions of the originating culture. It’s instant gratification rather than seeking to truly broaden your horizons and understanding of something outside of your own traditions and perceptions. I completely get why it’s wrong: you can’t just borrow something, wash it down, and take away its meaning. It’s rude and disrespectful.

That being said, let’s look at some of the traditions being used in The Forest. Plot-wise, Sara (Natalie Dormer) goes searching for her missing twin sister, Jess, who has disappeared into the Aokigahara Forest, a place notorious for suicides; supernatural and suspenseful events ensue. So how much credibility does this story have? Well, the Aokigahara Forest is indeed a real place. It averages about 70 suicides a year, and has a nasty history of death: it was a place where the Japanese would commit ubasute, or the carrying and abandonment of an elderly relative on the mountainside (so much to the point where the elderly are known for higher suicide rates in Japan).2 Not exactly happy time, but Japan has a rather storied history with suicide, going so far to accept it under certain circumstances when it would be deemed the honorable thing to do. With history like this, naturally, ghost stories pop up. The Aokigahara Forest is purported to be haunted by yurei, which is the equivalent of a Western ghost. However, to explain yurei as merely being “angry spirits”, as the film calls them, is not entirely appropriate. Yurei is a bucket term for spirits that are unable to move on to a peaceful afterlife, and they have different classifications: ubume, for example, stay behind to care for young children, while onryo return to wreak venegence on those who have wronged them.3 They’re not all bad; some just haven’t been able to cross over. 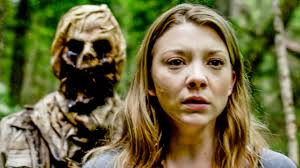 Don’t judge the ghost by its hood, lady.

The problem here is that The Forest tries to be sensitive and well-researched, but falls a bit short in its quest to produce something we may not have seen before. In the beginning, we know pretty clearly that Jess is an outsider in Japan: we watch her struggle to try to eat something unfamiliar as others laugh at her, and we see her attempt to speak with others that don’t speak her language. She clearly doesn’t fit in here. The film does try to explain ubasute, as well as the notorious history of the Aokigahara Forest. In this respect, it tries to incorporate aspects of both fact and myth so that the story is believable and respectful. However, the problem is that it uses generalizations, and doesn’t go into as much detail as it could have to prove a well-researched, respectful story. I would have loved to have heard more about the warning sign that’s posted at the forest’s entrance, trying to dissuade possible suicides from their actions. I would have loved to have seen some of the stories of workers that have to take out the bodies that are found there. I would have loved it if Japanese ghost folklore had been explored rather than summed up as “the evil Japanese spirits are going to come for our souls and never let us leave.” This film had the chance to educate me, but instead, it tried to tug at my heart strings by presenting a story about a woman chasing her unbalanced sister to a forest in Japan in the hopes that this woman was still alive. It focuses on being a story about familial regret and bonding, with a backdrop of the supernatural. Don’t get me wrong, a Japanese forest notorious for suicides and hauntings is creepy, but this story could have happened anywhere. It was plunked down in Japan, though, and that, I think, does a massive disservice to the culture. It had a chance to bring in a rich history. Japanese beliefs concerning ghosts are fascinating and mesmerizing; I think it could have gone much further. 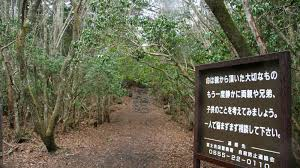 The actual place sounds, in a word, terrifying.

In the end, The Forest could have provided far more of an education for a Western audience that was not familiar with the concepts, traditions and locations. It could have sparked more people to research the incredible traditions of storytelling. Instead, we got sold jump scares amidst the bits and pieces of research that suited the story. That doesn’t do any favors to anyone. So if there are any other filmmakers out there: give me something that takes the traditions of which I am not aware and use it as a point of education. Teach me something new. Broaden my horizons; make me a more well-rounded person for knowing this. It beats the living hell out of a half-assed education that only borrows that which suits its needs.