Warning: count(): Parameter must be an array or an object that implements Countable in /homepages/45/d96662078/htdocs/clickandbuilds/TheBackseatDriverReviews/wp-includes/post-template.php on line 316
↓
Home→Aw Hell No→It Ain’t Easy Having a V-Card: Virgin Shaming in Hocus Pocus (1993)

As you may recall, one of my thorniest points of contention in Monster Squad (1987) comes from the whole notion that, to save the day, one must be a virginal female. The problem, I argued, didn’t have anything to do with the fact that a virgin was needed – it was the strict gender divide, that a male virgin couldn’t be considered to fit the bill. After all, if equality is what we’re after, mayhaps we should acknowledge that virginal males not only exist but have a role in the magical goings-on of cinema. Sadly, even when this happens, it’s a hollow victory. Exhibit A: Hocus Pocus (1993), a film that’s gathered a cult following over the years. This film dunks on the virginity of protagonist Max (Omri Katz), proving that being a virgin is viewed in a derogatory manner in a social expectation we can label as bullshit any day now. 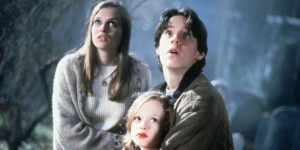 The plot of Hocus Pocus makes virginity a central ingredient. The Sanderson sisters (Bette Middler, Sarah Jessica Parker and Kathy Najimy) work the requirement into their resurrection spell explicitly: any virgin can light the Black Flame Candle, which will bring them back from the dead to continue their dastardly deeds. This loophole is important, as we tend to think that Max’s younger sister, Dani (Thora Birch), will be the one to light the candle accidentally. Turns out, it’s Max, who is attempting to impress the beautiful Allison (Vinessa Shaw) by engaging in supernatural shenanigans right before Halloween. 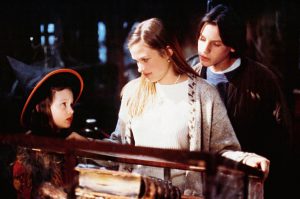 As if it’s not bad enough that Max accidentally resurrected a coven of witches that kill children to retain their youth (the fuck, Disney?!), he continually gets jabbed for being a virgin. Max snuggles with his pillow and appears desperate to spend time with Allison in any way that cements a romantic relationship, thereby paving the way for sex. As the one who lit the candle, Max is publicly outed as never having sex, which embarrasses him and makes him the butt of several jokes throughout the film. He’s blatantly made to feel ashamed, with the implication being that if he’d just boned someone before meeting his dream girl, none of this would have happened. The scorn ranges from asking who lit the candle to receiving disappointed side-eye glances. Even Thackery Binx (Sean Murray) gets in on it with his final words: “I had to wait 300 years for a virgin to light a candle!” Clearly, being a virgin is a bad thing, as it has the power to make murderous supernatural women reappear, causing children to die. If only he’d just used that pesky penis of his on the first vagina that walked by on his 11th birthday! 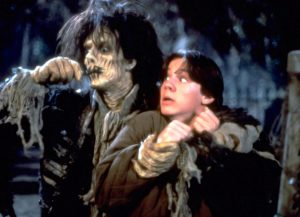 Reading that, you can see how ridiculous it sounds, and how much it draws a stark contrast with the female virgins of Monster Squad. In Monster Squad, the expectation was female virginity to save the day: it was expected, and it was desired because purity means salvation. This theme comes up with the running trope of the virginal Final Girl in most horror films: sexual abstinence means greater chances of survival; it’s prized. In Hocus Pocus, a teenage boy being a virgin – while completely normal and healthy – is mocked and scorned because it brings about the potential for ruin. After all, the Sandersons were publicly executed for murder and witchcraft, with a promise that a sexually uninitiated individual would result in the downfall of the town. That the person who lights the candle is a boy and not a girl seeks to underline his lack of sexual activity in terms of fitness to be a hero: Max comes off as weak and pathetic, with his lack of sex leading to potential pain and agony of the community. He’s seen as less masculine and incompetent – all because he hasn’t engaged in an act that can potentially spread disease and unplanned pregnancy if he’s reckless. If this is how we treat our boys, then we owe them a hell of a lot more. Waiting until you’re ready and reaching those milestones doesn’t make you less of a man – it makes you more of an adult that’s making good decisions and drawing healthy boundaries, and they shouldn’t be mocked and scorned for going at their own pace. If we want our girls to value themselves in this manner, we need to extend that consideration to our boys as well. 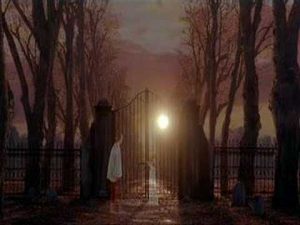 Sidenote: does anyone else feel like they don’t want to take sass from a bitchy ghost whose first name sounds like a mispronunciation by Mike Tyson?

Ultimately, this film may be beloved because it’s a Disney classic, but it certainly misses the mark. Virginity isn’t a cause of shame, and if we hold up the non-activity of one gender as a strength while deriding it as a weakness to another gender, we’re doing everyone a disservice. So let’s stop it by agreeing that this message is toxic and perpetuates horrible ideals. Our kids – all of them – deserve better.