Warning: count(): Parameter must be an array or an object that implements Countable in /homepages/45/d96662078/htdocs/clickandbuilds/TheBackseatDriverReviews/wp-includes/post-template.php on line 316
↓
Home→Comedy→Weekend Movies: Five Reasons to Watch Tucker and Dale Vs. Evil (2010)

A true sign of genre acceptance is a parody. On a bad day, it can be corny, drawn out and unfunny; on a good day, a parody can hit all the right notes, taking scary situations and making them knock-down, drag-out funny. Such is the case with Tucker and Dale vs. Evil (2010), about well-meaning buddies Tucker (Alan Tudyk) and Dale (Tyler Lebine), who get mistaken for psychotic killers after a series of mishaps while renovating their lakefront cabin in the woods. Here are five reasons to watch it this weekend. 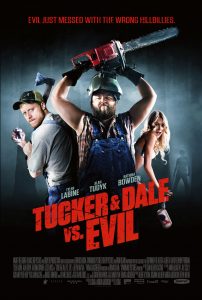 This film takes expectations and turns them on their ears. Tucker and Dale are the good guys who are simply undertaking a remodel of a modest place they’ve purchased for leisure; the ones who tend to mess everything up are the band of college students that suspect the worst. Along the way, there’s the lovely Allison (Katrina Bowden), who’s far more than just a beautiful final girl or a vapid temptress. Seeing these expectations get flipped certainly makes for a positive change in the viewing experience.

Renovating anything sucks. Yes, some people do this for fun; others do it for profit. Personally, I don’t find it fun in the least. I tip my hat to Tucker and Dale for even attempting to take something run down and make it better – I’d have to hire a professional or else everything that could go wrong would. And yes, everything that can go wrong for Tucker and Dale’s repairs does. The sheer amount of accident is enough to make me want to stay away from listings that say “needs work,” especially with all of the misunderstandings and accidents that happen along the way. 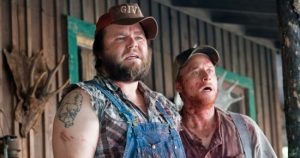 Hey! Get off that AstroTurf!”

Oh Dale. Watching poor Dale struggle to talk to Allison is tough at times. More often than not in real life, we look like Dale, and there’s nothing wrong with that (bellies for the win). However, Dale gives us a voice to how we feel like we’re not good enough – we root for him because we often see ourselves as the underdressed types who don’t bring much attractiveness or sophistication to the table. We see that insecurity and we want to hug him and give him a pep talk. The best part about Dale is that he keeps being himself, and that’s just fine.

There is so much gore in this film I could cry. Happy tears, mind you; always happy tears. Sometimes, directors try to shovel as many guts onto the screen in hopes of shocking you and making you sick. For this film, there’s plenty of blood, but it’s for laughs. I would really love to know what their fake blood budget looked like. It’s glorious. If you like your fake blood to run in rivers while severed limbs go flying away in comical fashion, this one’s for you. 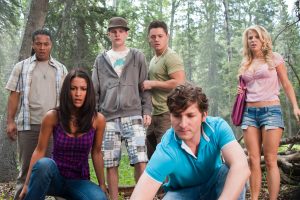 Again, a wonderful running gag in this film is that everything has a logical explanation. Between the logistics of why people are in certain locations versus how a trap goes off versus backstories of certain characters, everything has a logical explanation. It’s funny to watch the characters invent insane theories. It’s sort of like analyzing films…

Tucker and Dale Vs. Evil is available on Netflix.