I’m still struggling with the cold from Hell, but I’m not about to let that dent the festivities of October. 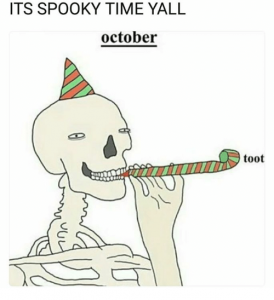 This week, we’re kicking into high gear with a look at Hocus Pocus (1993), a film for which I surprisingly have no love. We’ll then recommend Tucker and Dale vs. Evil (2010), because it’s hilarious and full of gore – what’s not to love?

Additionally, the crowdfunding campaign for Scared Sacred: Idolatry, Religion and Worship in the Horror Film is still going, with a few weeks left. Head on over to Indie Go Go to fund this – yours truly serves as one of the editors, as well as the author of two chapters. Check it out!