Warning: count(): Parameter must be an array or an object that implements Countable in /homepages/45/d96662078/htdocs/clickandbuilds/TheBackseatDriverReviews/wp-includes/post-template.php on line 316
↓
Home→Brains→MITCH! The Top Ten Quotes of Real Genius

Real Genius is a great love of mine. I watched it as a little girl, and even though I didn’t get half the jokes at the time, I knew that something fun was going on. Really, it’s got so much going right in it: Val Kilmer being a smart ass in the 80s. Tons of eyeliner (mostly on Kilmer) and bad hair. William Atherton being a snarky asshat. Science humor. God I love this movie. Seeing as how I don’t typically do top ten lists on this site, I figured what the hell. This one is special. Here are the top ten favorite quotes of mine from Real Genius, presented with commentary. 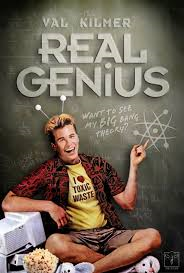 Ah, Kent. Robert Prescott’s Kent is one of my favorite characters of all time. He’s such a self-important, smarmy dick, and Prescott plays him to perfection. He’s smart, sure, but he’s also a kiss-ass and total crap weasel of a human being. The thing is, we all know at least one Kent – at least one. And chances are, your version of Kent has the same issue as this version of Kent: a person who cannot get laid to save his or her life. We smile at that, and we smile at every other joke that’s made at his expense. It’s nice to think that an asshole can’t get laid.

#9 –”Can you hammer a six-inch spike through a board with your penis?”
“Not right now.”
“A girl’s gotta have her standards.”

Each and every woman out there has had a creep hit on her when she didn’t want it. This is quite possibly one of the best responses to a pickup line out there. I don’t think I could ever top this (except for the dude that “complemented” my breasts the one time, who I told, “If you think these are great, you should see my balls.”). It’s perfect. Girls do have to have their standards.

Never stop whacking it, Kent. Ever. 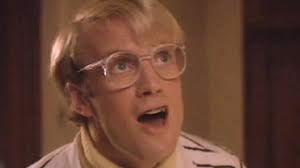 On an unrelated note, I never want to see Kent’s O-face.

Sometimes, life gets tough. Really tough. Bang-your-head-against-the-wall-and-pray-that-unconsciousness-takes-you-quickly tough. Coping is something we all do. This line is a great reminder that when life gets tough, take a step back. Then take a step forward. Then start dancing like a goofball. Life’s too short. Be a dork.

William Atherton excels at playing an asshole. This one-word response to the question of an elderly woman sets the stage for most of his interactions throughout the rest of the film. He’s such a dick to everyone he meets: suggesting shock treatments, barking orders. He’s deadpan and has a superiority complex two miles wide. This really is the perfect introduction to Dr. Jerry Hathaway.

No one quite nails smarmy dick like William Atherton.

#5 – “Would you classify that as a launch problem or a design problem?”

I have asked this question so often in my life. Usually, I ask it when something has gone wrong and I need to lighten the mood. Really, so many problems can be broken into these two categories. Again, it’s all about stepping back and looking life with your humor intact and a new perspective.

#4 –”Was it a dream where you see yourself standing in sort of sun-god robes on a pyramid with a thousand naked women screaming and throwing little pickles at you? … Why am I the only one who has that dream?”

I am a vivid, lucid dreamer. While most people dream about their teeth falling out, my brain creates strange scenarios where I’m the Ripley character from Alien and I have to save the town. That’s one of the tamer ones. So I can totally appreciate a joke about an oddball dream, because it happens to me all the damn time. It’s not just you, Chris Knight. It’s not just you.

I have that dream too, Chris.

#3 – “Self-realization. I was thinking of the immortal words of Socrates, who said, ‘… I drank what?'”

Honestly, who hasn’t had this thought run through your head when you see someone who is insanely attractive? Maybe I’m just a giant pig, but I find myself thinking this quite a bit. Chris has no inner monologue, though. It’s all out-loud voice with him. I love him so much for that.

The first time I pulled that gag on someone, I got a confused stare while the girl next to the asker laughed her ass off. It’s a great line – my favorite of the film. I adore it so much that I’ve used it in real life as an ice-breaker. And really, that’s the best part of this film: it presents so many opportunities for awkward people to make a joke as a way to fit in during a new social situation. It’s relatable and fun.

As a longtime viewer of this film, I love it and can quote most of it by heart. These are but ten of my favorites. Perhaps it may be time to watch it again if you haven’t seen it in a while, to pick your top ten lines. Heaven knows the film is full of them.