Warning: count(): Parameter must be an array or an object that implements Countable in /homepages/45/d96662078/htdocs/clickandbuilds/TheBackseatDriverReviews/wp-includes/post-template.php on line 316
↓
Home→Bullshit→Modern Love: The Bullshit of Romance in What If

I went into What If thinking that it might be a good romantic comedy. Ten minutes in, I was already checking the counter. It took fucking forever to move, but once it did, it was like watching a 10-car pile up. I mean, I wanted to like it – as someone who has had friendships turn romantic, this should have spoken to me. What I saw in it, though, was a whole lot of possessiveness and bullshit. And the the worst part – aside from the horrible pacing – is the fact that this is totally realistic. 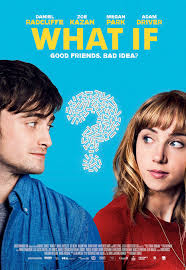 There were maybe 20 minutes of this film I actually liked. 20.

To recap, here’s where we are with this one: Wallace (Daniel Radcliffe) and Chantry (Zoe Kazan) meet cute at a party. She gives him her number before casually mentioning that she has a boyfriend. Wallace, who is still reeling from a cheating girlfriend, has feelings for her, but supresses them in a bid to maintain a friendship with someone he really likes. Throw in Chantry’s dickish boyfriend Ben (Rafe Spall), Wallace’s friend Allan (Adam Driver), and Chantry’s slightly trashy sister Dalia (Megan Park), and the whole thing is set up to be a fun, madcap story about two people that we want to be together that have to realize that they’re perfect for each other. Add a dash of Coldplay and a splash of iPhone, and this is a tale for the masses.

Problem here is that there is some really dickish behavior happening, and no one really questions it. Excuse me if I ramble, because this is messy. Chantry and Wallace start off on terms that are hazy at best: despite that she has a boyfriend, she gives him her number to hang out. He gets rid of it, thinking that it’s a bad idea. In turn, though, she runs into him at a movie theatre, then pretends to be texting so that they can start up a believable “I can’t believe I just bumped into you!” meeting (is that bump-into cute?). From there, they start emailing, despite that the friendship has some obvious attraction issues. Let’s face it, her agonizing over the wording of a dinner invitation is just as much of a struggle to contain her feelings for him as it is for him to compose notes. Worse yet? Her boyfriend Ben has to have a man-to-man conversation with Wallace to ask him his intentions. “I have no problem with Chantry having guy friends…” he starts out, and just like that, we know how this is going to end. The guy feels threatened not even five minutes after meeting him. Despite that they’ve been together for years, he still feels that Wallace is going to swoop in and steal his woman. Cut to circumstances of Ben moving away, and this paves the way for Chantry and Wallace to get even closer as they wrestle with failed set-ups and increasing companionship. By the time we get to the skinny dipping scene, we’re expecting them to go for it because it’s clear that they like each other. They stoically don’t have sex, waiting instead until the very end of the film – when she’s moving to Taiwan – to kiss and declare that they wouldn’t have done things differently.

I’m calling balls on all of this.

This situation is pure crap. Chantry knew goddamned well what she was getting into, from the pause in front of the movie theatre to the “close your eyes!” shrillness of getting out of her dress. Wallace isn’t a saint either; he liked her and wanted to make sure that they had a shot, hanging out with her despite that she had stated that she was in a relationship already with no intention of going anywhere. They developed a relationship without really admitting out loud that they had a relationship, and when they did admit it, they assured everyone it was just a friendship because – survey says – Chantry had a boyfriend. Bullshit, lame-ass excuses all around. On top of that, we had Ben’s oh-so-confident speech of “don’t get your penis anywhere near her,” which is such lamesauce it’s not even funny. Here’s something every man and woman alike has wanted to say to a possessive mate: WE ARE NOT GOING TO CHEAT BECAUSE THERE’S SOMEONE AVAILABLE. Believe it or not, people can indeed be left in the room with another person. They can even – GASP! – hang out together in mutual harmony without having sex. No one person is the sole dictator is “stealing” someone away. If someone leaves, it’s normally due to unhappiness in the relationship long before another person shows up. It came off as possessive and threatening, and really, we should be moving past that. It’s old, and I know more people that roll their eyes at this way of thinking. 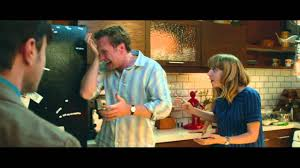 This whole thing feels like a pepper getting in your eye.

Thing is, though… for every person that rolls their eyes, there’s another person who nods their head in agreement. In fact, the name of this film was supposed to be The Friend Zone, which was changed when someone realized the sexist connotation of the phrase. The implication is that men are left to stew in a de-sexed category, with hope that one day the woman in question will decide that he’s totally fuckable. It’s insulting to all genders: for women, it implies that their non-existent feelings of attraction are not a valid thought, and for men, it means that they just have to work harder to get that sex. And this film totally buys into that line of thinking. Really, go back and read that plot synopsis – Wallace just has to wait it out until the end, when the boyfriend is out of the way and he’s able to make his move. Chantry just has to realize how doable Wallace really is. And it’s all presented under the guise of listening to one’s heart. It’s not listening to their hearts. These characters wait it out until the other options have fallen away. It’s cowardice.

To its credit, the film does attempt to make the point that the pair should have just had a conversation about how they felt. Maybe that’s the takeaway we should have from this: have the conversation, even if it’s sticky, and decide if you want to proceed from there. You never know until you ask (and I myself am guilty of not broaching this subject as of late). Lesson learned. I just saved you an hour and forty minutes. You’re welcome.