Warning: count(): Parameter must be an array or an object that implements Countable in /homepages/45/d96662078/htdocs/clickandbuilds/TheBackseatDriverReviews/wp-includes/post-template.php on line 316
↓
Home→Emotions→My love affair with Netflix’s ‘Love’

***This article contains spoilers for all of season 1 of Love. If you’ve already seen it or think I should stop telling you how to live your life, kindly continue*** 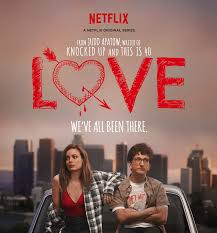 So it all started back in January 2016, when a trailer for season 1 of Love dropped and I was sold on the premise. The first season officially came out and I couldn’t get through it because it wasn’t what the trailers had promised. The show had been sold to me as this rom-com-esque story between two people, but the first episode seemed too fragmented between there individual stories. Put it on the pile of Netflix stuff I’ll never finish with all the Marvel shows and House of Cards.

Fast forward to 3 weekends ago. Season 2 of Love was on the horizon and I wanted to give the show another shot. Having just finished Santa Clarita Diet, it was recommend at the end of the show when Netflix gives you those 3 options of similar stuff. I figured, “Why not?” and dove in. Finished the first season in less than 24 hours. 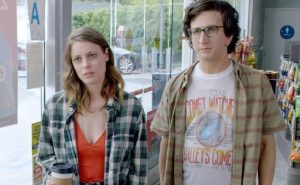 The thing I loved most about the series was the honesty within the characters. The fragmented narratives that had previously turned me off became a draw. We follow Gus, a nerdy guy in his 30’s who’s a bit withdrawn and generally anxious, and Micky, an outgoing woman in her 30’s who doesn’t seem to have it together. This show takes these typical tropes and inverts them. Throughout the first season, Gus thinks of himself as a “Nice Guy,” but he does things that contradict this image. Anyone guy who considers himself just a “Nice Guy” might be a serial killer (get out of the house before you find the collection of heads in the basement) because no one is just nice on the surface full-stop. He shows himself to be much more complex with how he reacts to mundane situations. At his core, he’s a lonely person looking for a connection with someone else. He engages in several relationships in the first season just because they’re there. It’s rare you ever see him actually talk about being interested in a person. For example, he goes on a date with Mickey’s room mate, Bertie, at Mickey’s suggestion. Gus and Bertie have had maybe one interaction before this, which didn’t come across as anything beyond general politeness. When on the date, Bertie accidentally accidentally texts Gus with a message meant for Mickey saying Gus is nice but doesn’t want a second date. When Gus sees this, he starts intentionally acting in a way to make Bertie uncomfortable and texting Mickey in hopes it’ll amuse her. Real “Nice Guy”. Although Bertie eventually catches on and plays along, it shows that Gus is disconnected from his feeling of rejection and would rather spin them in to flirtation with someone else, than face them head on.

He does a similar thing later in the season when things don’t go well on a date with Mickey. Rather than act like an adult and process how he feels about her, Gus simply moves on to the next woman who smiles at him, this time in the form of Heidi, a woman he works with. I’m not going to talk about the dangers of dating where you work; some people can make it work and some can’t. In this instance we never see what Heidi and Gus have in common: he just jumps in to a relationship with her because she’s attractive and nice to him. We get a few scenes of the two of them together, and it comes off as awkward when they try to have a conversation. Things eventually fall apart when they’re no longer working together. 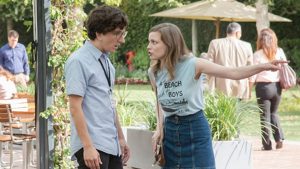 This leads to Gus’ biggest selfish act of the first season. In the final scene when he’s at a low point post-the Heidi break up and a few professional set backs, he goes to the store where he and Mickey first met to buy some comfort food. Mickey shows up to apologise for how she treated him and starts to confess her issues with alcoholism and sex and love addiction. As she pours her heart out saying she likes him but wants to take a year off dating, Gus kisses her. Some may see it as romantic, I read it as ultimately selfish on Gus’s part. Someone tells you they have a problem with addiction and you force the exact thing they’re telling you they want to avoid in their face – that’s a selfish act. So I don’t buy Gus as the “Nice Guy”. He’s not overtly a villain and the audience can’t help but sympathise with some of his dorky ways, but the way he acts towards relationship is wholly selfish.

Mickey starts as a character with several issues with addiction and relationships, but she also subverts this typical character trope by being very honest about her flaws. She acknowledges her addictive personality as the first season goes on and tries to deal with them in a very grounded way. There’s not miraculous “come to Jesus” moment; she just deals the way she knows how. It’s a wonderful portrayal of a person in crisis and not knowing how to react to it. We see her get short with characters over minor issues, and her frustration at her own actions. It’s easy to relate in these moments because we all say things in the moment when we feel a certain way. Then hours later when that feeling fades, you think, “Why the fuck did I say that/act that way?” So while she’s presented as the opposite of the shy, dorky Gus, Mickey is much more in touch with how to deal with internal issues. 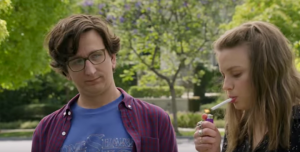 She’s not entirely a saint. She goes on a date with Gus which ends disastrously when she’s clearly not having a good time. Rather than confront that she feels unhappy about the situation and communicate it to Gus, she acts out, embarrassing them both in public. This is the core of Mickey’s problem: she can’t communicate how she feels, so she acts out in other ways. She shows this by being emotionally distant: when Gus would ask about meeting up or doing something, she would ignore him or blow a minor detail out of proportion because she’s afraid of things getting real (having been on the receiving end of this kind of behaviour in the past, it’s not fun to be rebuffed for something as minor as asking someone how they’re doing). Her behaviour makes more sense when we find out she’s a sex and love addict, but it doesn’t totally excuse the way she acts.

We see her confront several exes throughout the series. As she encounters each one, we get a great sense of where she’s coming from and how things have ended for her in past relationships. This seems to give her an excellent clarity on how to not screw things up with Gus. She’s confronted with these past relationships and how her own issues have ruined them, which I think is what ultimately gets her to confront Gus at the end of the season. Rather than hide her issues as she has in past relationships, she admits all of her addictions to Gus in one monologue, telling him she isn’t ready right now, but wants to take a year to get her head straight and then try a relationship with him. At which point Gus kisses her as discussed above because he think it’s romantic rather than as selfish as it looks. 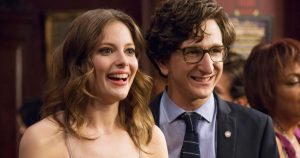 Overall, Love is a complicated show which really shines in its two lead characters. What could’ve been a a rom-com type show about two people who fall in love is so much more complicated (like relationships actually are. Sorry had to put this in brackets because it’s somewhere between fortune cookie wisdom and Peter from The Room‘s musings on the human condition.). This show has some true humanity to it, which is what Netflix really has in it’s corner. They make Bojack Horseman, a show I dearly love and may write about on here someday. But Love captures how messy and hard work and uncertainty goes in to starting a romantic relationship.