Warning: count(): Parameter must be an array or an object that implements Countable in /homepages/45/d96662078/htdocs/clickandbuilds/TheBackseatDriverReviews/wp-includes/post-template.php on line 316
↓
Home→Animated→No Real Villain: The Lack of Bad Guy in Lilo and Stitch (2002)

Prior to the Golden Age of Pixar, Disney was the one that would give us films that had a surprising amount of depth packed into them, albeit once in a blue moon. Such is the case with Lilo and Stitch (2002), an animated children’s film that featured a trouble-making alien named Stitch (Chris Sanders) being adopted by a troubled orphan named Lilo (Daveigh Chase). As with most Disney films, the formulaic plot demands several canned aspects: a cute kid, a wacky protagonist, a learned life lesson, and a villain we root to fail. There’s only one problem with this film: there’s no clear-cut villain. 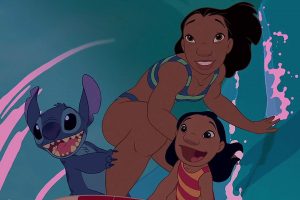 It’s all fun and games until someone wants to go surfing.

Backing up a bit, we need to explore the plot. Dr. Jumba Jookiba (David Ogden Stiers) is jailed when he creates an illegal biological experiment: Stitch. Stich, or Experiment 626, is highly intelligent, super strong, and very destructive. The experiment is shipped off to an isolated asteroid for containment purposes, but then breaks free and finds his way to Earth. Once there, he’s adopted by Lilo, a little girl who has lost both her parents and lives with sister Nani (Tia Carrere). Life with the sisters is hectic: the loss of their parents has thrown Nani into the role of parent when she’s clearly unprepared and overwhelmed, and Lilo acts out as a result of the turmoil, getting into physical altercations with peers. This trouble gets noticed by social worker Cobra Bubbles (Ving Rhames), who observes the family to determine if Lilo needs to go into foster care. In typical Disney fashion, Stitch steps up for the family that took him in and accepted him – destructive ways and all – which leads to a commuted sentence to life on Earth for Stitch and further acceptance of Jumba and his assistant Pleakley (Kevin McDonald) into the rag-tag family. 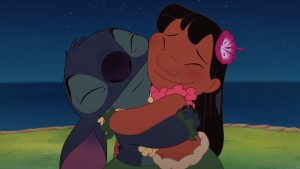 The thing is, there aren’t any purely evil individuals in this entire plot. The closest we get to a bad guy is Captain Gantu (Kevin Michael Richardson), a member of the Galactic Federation who tries to recapture a dangerous asset. Make no mistake: Stitch is cute, but he’s the result of an unethical experiment that a governmental body rightly attempts to contain, as his knack for chaos could wind up doing some serious damage to various planets. No one is trying to hurt him for the sake of torturing a cute little alien; they want to ensure safety for the larger group, which isn’t evil motivation. He’s not being repressed: he’s a very real threat to life. In that same vein, Bubbles isn’t an evil character either, though it’s easy to paint him as such. Bubbles is the one who gets to decide if Lilo stays with Nani, and as such, he must make tough calls. Bubbles isn’t here to spout warm, fuzzy philosophy about keeping the siblings together: Bubbles has a job to do, and it’s to make the determination of whether Lilo is in a safe, healthy environment where she can thrive and learn how to become a functioning adult in a stable environment after a pretty big trauma. Considering that she’s getting into fist fights, is socially isolated, and lives with a sister who can’t hold down a job and would rather be surfing, it’s a no-brainer. A difficult decision does not a bad guy make. 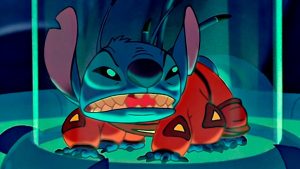 This bears an uncanny resemblance to me when my alarm goes off in the morning.

The message of Lilo and Stitch not having a villain is so important. The themes explore the notion of the difficult decisions associated with being an adult: no one acts out of malicious intent, but rather a need to protect and think of the best interests of those involved. It’s so tempting to say that Stitch should be allowed free reign because he’s cute and funny, or that Lilo belongs with Nani – we see the potential for a happy ending, and we want to run with that. Luckily, our gang does get it together and prove that they have self-control and the ability to adequately provide for a family. The flip side of that is the grim knowledge we don’t want to admit: the possibility (and reality) that these situations could have ended on a different note entirely. Odds were pretty good that Stitch was going to continue being destructive, and that Nani would keep losing jobs and Lilo would continue to deteriorate. Stitch should have been contained and Bubbles had every right to investigate the sisters’ living arrangements with attention to Lilo’s well-being. And therein lies the rub: while it’s not always cuddly or ideal, sometimes decisions are made to protect others, and we don’t like the implications. This reality doesn’t make anyone the bad guy – it means that life is complicated, and more thought needs to go into a decision rather than simply choosing the ending that provides short-term happiness. It’s not always a clear-cut Big Bad Wolf; sometimes, it’s real life that’s forcing us into doing the right thing. 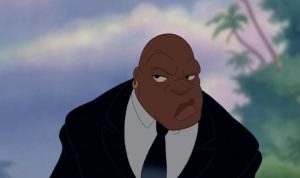 This aspect of Lilo and Stitch is so terribly important to explore for children. As they grow, it’s important to note that what we’d like to see happen may have far-reaching, unintended, negative consequences that we may not anticipate. Sometimes, we can’t be idealistic – sometimes, we need to look a situation in the eye and view all aspects before making a decision. The care and forethought that goes into the motivations of this film are to be commended. It’s not easy to say that the lives of many matter more than the freedom of one with a compulsion to destroy. It’s not easy to take a little girl from her home and family, but sometimes, she’s in an environment that’s hurting her more than helping her. Those are very adult scenarios, and yet the film approaches them with tact and grace. We don’t see bad guys. We see people who are trying to do their best to make sure everyone is safe. It’s weighing your wants for the sake of what must be done to ensure safety. Making those choices can be difficult and disheartening, but those decisions still must be made, even if it doesn’t lead to pristine happiness in the interim. If that’s not a life lesson that’s painfully front and center in today’s world, I don’t know what is.