Warning: count(): Parameter must be an array or an object that implements Countable in /homepages/45/d96662078/htdocs/clickandbuilds/TheBackseatDriverReviews/wp-includes/post-template.php on line 316
↓
Home→Comedy→Weekend Movies: Five Reasons to Watch Better Off Dead (1985)

As the summer has officially wound down, we need to look ahead to films that cover the school year. Especially winter. More specifically, skiing. In September. Because reasons. OKAY, OKAY – we’re recommending Better Off Dead (1985), the charming tale of Lane (John Cusack), a high schooler who decides, unsuccessfully, to end it after his girlfriend dumps him. As Lane slowly gets his groove back with the help of French exchange student Monique (Diane Franklin), we get to giggle at the hijinks around him. Here are five reasons to watch it this weekend. 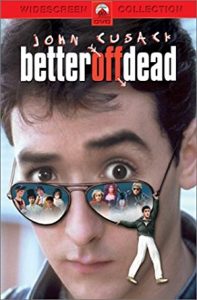 Suicide and depression aren’t laughing matters. In the 80s, we tended to brush off some of those issues as kids being melodramatic, or the punchline for some joke. While some kids can still be drama queens, I’m far more likely to see if someone is okay than to just brush off their announced intention to off themselves. If you’re struggling, there are resources out there that can help.

Every artist I know loves the work of Savage Steve Holland. He’s best known for One Crazy Summer (1986) and How I Got Into College (1989). Among his achievements: he did the design and animation of the Whammy characters on the 80s T.V. show Press Your Luck, which I watched solely for a glimpse of the sarcastic little devils traipsing across the screen. He mostly works with Disney and Nickelodeon now, but if you’re into 80s animation with a bit of bite, Steve was your guy. 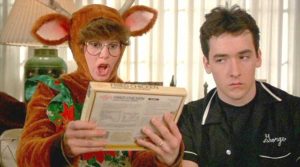 #3 – The exchange trip from hell

When I was a kid, my sister and I wanted to have an exchange student. That never panned out, but I have heard both good and bad stories. Among the good stories: I still keep in touch with the German exchange student that visited during high school (she was incredibly sweet back then and is still a wonderful human being now). The downside is Monique’s experience: she’s brought over in an attempt to get a date for her host family’s awkward, creepy son. Just… ugh. I don’t care who your kid is, this is not a way to date. We feel for Monique because the situation is gross and awkward, and Ricky (Daniel Schneider) looks like he’s 30 seconds away from dismembering her and eating her hair. Being in a foreign country for months on end with a continuous campaign to date the guy who looks like he has a collection of toenail clippings under his bed? No thanks.

One of the running gags in this film is the paper boy, Johnny (Demian Slade), hunting down his payment for service. Now Johnny doesn’t exactly have the best of aim during his newspaper deliveries, so I can understand why people would hold out on him, but he’s relentless in his pursuit of two bucks. His “TWO DOLLARS!” is a battle cry I’ve been known to scream when it’s game time. Yes, I’ve yelled that while playing World of Warcraft. Frequently. It’s not the sweet payday – it’s the principle of the matter. 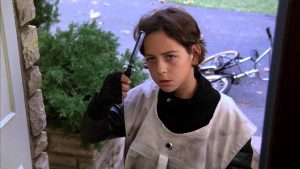 A friend and I used to work on the same team at an I.T. company, and anytime that someone brought up the word “French,” we’d have to mispronounce it the way Lane’s mother does in this film. The dinner scene takes up about a minute, but it’s easily one of the most memorable. Plus, I dare you not to pronounce “French” as “Frawnch” afterwards. I still call it Frawnch dressing and Frawnch bread. Everyone who has watched this movie will bust out laughing the minute they hear you do it. It’s how I can tell who has seen it and who hasn’t.

You can pick up Better Off Dead from Amazon for under ten dollars.