Warning: count(): Parameter must be an array or an object that implements Countable in /homepages/45/d96662078/htdocs/clickandbuilds/TheBackseatDriverReviews/wp-includes/post-template.php on line 316
↓
Home→Comedy→Ooooh Boy: Examining The Jerk (1979) In Modern Context

Upfront admission: I love Steve Martin. The man is hilarious, and we’re lucky to have him. One of the films for which he’s best known is 1979’s The Jerk, the story of dimwitted Navin R. Johnson. The film is a rags to riches to rags story that stresses the importance of loyal family relationships. Like most films from the 1970s, this one is viewed in a different light now, given the running gag that Navin was raised by a black family without realizing he’s white. It was a funny concept then, but in the age of sensitivity – which is not a slam by any means – the same concept gives us pause. The million-dollar question: how do we approach a film like this in modern times? 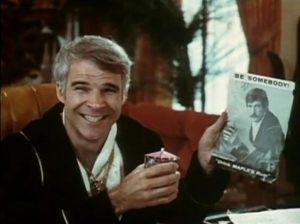 Now we could take the approach of defense or offense equally. On one hand, Navin’s family raises him without pointing out his differences, which is a sweet message concerning unconditional love and acceptance. Some of the jokes – including his lack of sexual experience, communication with a barking dog, and extreme excitement of finding his name in the phonebook – point to the sheer amazement that someone could be that big of a naïve soul (or, as some friends would refer to him, an absolute moron). On the other hand, the film contains jokes at racial expense, including the leaving-home advice of “Don’t trust whitey” and the grossly stereotypical meals and activities shared by the Johnson family. It’s equal parts laughter and cringe, but the larger question looms: knowing what we know now, should we even laugh in the first place? 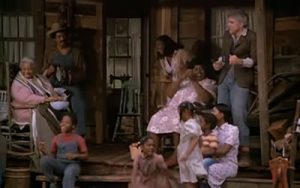 Arguments are made in favor for either position, and here’s where I’m going to place a divide: the jokes around Navin being naïve and dim are fine, but we need to realize that the racial gags are hurtful. That’s the heart of this debate in terms of older films: folks want to say that everyone should lighten up, that it was from a different era, relax, it was a joke, etc. However, the fact remains that groups fight to escape those stereotypes because they’re hurtful and spread a continued, poor, enduring image. It’s okay to laugh at the more universal moments of Navin being a moron, because those moments are fucking funny – you’ve got to be stone-faced to not laugh at the new phonebook bit due to Martin’s earnestness. However, it’s not okay to laugh at a caricature of sharecroppers. Some may consider that position a bit too politically correct for a brief part of the film, but consider this: if you’re not part of the group that is getting portrayed that way, maybe it’s best to take a step back and think about their thoughts and feelings. Or better yet, maybe it’s best to ask them about their experiences. It never hurts to learn more about someone, including their history and opinions. After all, a different viewpoint opens greater understanding and more solutions. At the end of the day, we just want to be heard, and that starts with the respect when someone expresses discomfort. In a world full of angry screaming, everyone just wants to be heard; sometimes, you have to lend that respect to get it. 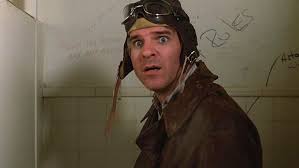 Listen, we can all enjoy Steve Martin deadpanning a happily disbelieving reaction to sleeping in a back room at a gas station. We can giggle at him mishandling Bernadette Peters’ face as he’s complimenting her skin. It’s hilarious when he sends a note home laden with sexual innuendos, which his grandmother reads out loud while his brother can’t keep a straight face. It’s okay to laugh at that because stupid is universal – regardless of ethnicity or gender or creed, we have all encountered someone who is that stunningly misguided. That’s what makes The Jerk so entertaining: we can’t believe someone could be this way, and yet we’ve encountered someone – whether it’s a family member or someone arguing in line at the store – who is like this. It’s equal parts amazement and shock. And it’s okay to laugh at Navin, because life can be absurd like that. It’s okay to find it funny because we need to laugh at times like this when the political landscape is scary and we don’t know which end is up. We need that release. 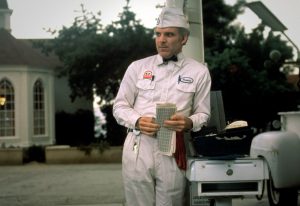 Prepare to be amazed.

However, we need to recognize when something might be construed as hurtful. We all need that release, but not at the expense of demeaning an entire group of people. Rather than get angry, go out and talk to someone who hasn’t had your experiences. Learn a little bit and take another’s perspective. Talking is a great way to find out new information. If we show each other respect and listen to what the other has to say, the world can be more positive and less of a mess. Isn’t that something we’d like at the end of the day?