Warning: count(): Parameter must be an array or an object that implements Countable in /homepages/45/d96662078/htdocs/clickandbuilds/TheBackseatDriverReviews/wp-includes/post-template.php on line 316
↓
Home→Horror→Weekend Movies: Five Reasons to Watch The Woman (2011)

It’s going to be fall in about a month. You know what that means – pumpkin spice everything! Unless if it’s pumpkin pie, I can leave it – I’m not a latte fan. However, the advent of fall also means that we’ll be getting more horror fare. And what better way to prepare ourselves than by looking back at some of the awesome horror films of the past decade? One shining example is our boy Lucky McKee, who has quite a few twisted volumes under his belt. One that I love is The Woman (2011), about a family that finds a feral woman (Pollyanna McIntosh, who’s just divine in everything she touches), kidnaps her and participates in her “civilization”. You can see where this is going. Here are five reasons to watch it this weekend. 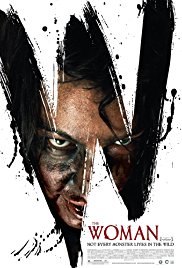 I have a soft spot for Bettis, who plays mother Belle in this film. If Bettis looks familiar, you may have seen her in Girl, Interrupted (1999), May (2002) and Masters of Horror: Sick Girl (2006). I always adore the awkward yet confident quality she brings to her characters. The audience sees her characters as being a little out there, but we don’t see any simpering or apologizing; Bettis takes these women on and doesn’t really care if they don’t fit in. There’s balls to that approach, because she essentially flies the freak flag and tells us that she has better shit to do than think of how we judge that character – they’re who they are, take it or leave it. I respect that about her, so any time I get to watch her do that is a good day.

Well this is a loaded topic. Between the political environment and the little everyday lies we tell ourselves about how we’re rational, moral citizens, the easier we can see that we still have a long way to go before we can claim superiority over anything in an ethical sense. We watch a family in this film kidnap a woman from her natural environment while bathing – one of our most vulnerable times – and then proceed to subject her to psychological and physical torture. The worst stuff comes at the hands of the guy wearing the button-down shirt and the charming smile. Another reminder that you should analyze someone before simply accepting their assurances at face value. 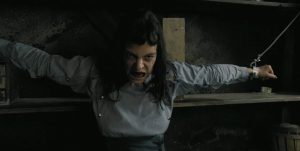 Nice clothes do not civilized make.

In January of this year, we lost Dallas Mayr, known more widely as Jack Ketchum. He was quite the storyteller, having nabbed Bram Stoker Awards for the categories of Short Fiction, Long Fiction, Collection and Novella. He teamed up with Lucky McKee on I’m Not Sam, and was responsible for another story we’ve covered on this site before: “The Box,” which was adapted into a segment of 2017’s XX. Ketchum penned The Woman in both book and film format. He and McKee worked well together. I will miss that dynamic for some time to come.

Hats off to Ms. Raton (Carlee Baker), the teacher of troubled daughter Peggy (Lauren Ashley Carter). She not only suspects something really bad is going on at home, but she puts herself in danger to go check it out. As a former teacher, I can totally buy where this comes from in the heart of a teacher. Having been in a position where I had to report suspected child abuse, this aspect of the film felt real because teachers will do anything to protect our kids. Yes, our kids – once you’re in our class, you’re our responsibility and we will go to the ends of the Earth for you. It may sound nonsensical or along the lines of a plot hole to have this teacher so involved, but beyond the shadow of a doubt, many teachers would put themselves on the line like this for their kids. 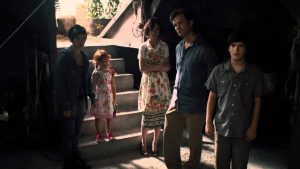 Teachers can smell bad shit a mile away.

We all know at least one family that we look at and say, “Something isn’t quite right there.” It could be the ultra-religious types; it could be the quiet bunch that doesn’t make much noise; it could be the clan that projects wealth and prestige. Just below the surface, you know that something is lurking that’s not quite right, whether it’s a gambling problem or a raging case of abuse or a pattern of compulsive, unhealthy behavior. What I’m saying here is that this film really capitalizes on that sense of a perfectly normal family being, well, off and disturbing. The Woman certainly makes us question what we see.