Warning: count(): Parameter must be an array or an object that implements Countable in /homepages/45/d96662078/htdocs/clickandbuilds/TheBackseatDriverReviews/wp-includes/post-template.php on line 316
↓
Home→Uncategorized→Outgoing Transmission – Kino’s Gender (Being Trans and Kino’s Journey)

I was flipping through Amazon Prime, looking for something to watch, when I came across an anime I haven’t watched in a decade.  Kino’s Journey is one of the first anime my wife and I watched together.  It holds a close place in my heart.  This time I went into it with a different perspective than the first time.  Since the first watching, I have acknowledged the fact that I’m Trans, and I think Kino is too.

Kino’s Journey is an episodic anime about a traveler Kino and Hermes, Kino’s motorad (self-aware motorcycle).  Each episode, Kino visits a new country, and learns something about its population.  Kino has a strict rule of only staying three days, and appears to follow the prime directive (non-interference).  In our first watching, my wife and I presumed Kino to be male, until the fourth episode where it is revealed that Kino is female.  On my second viewing, I decided to take a different perspective, and assume that Kino is non-binary.  So for the remainder of this article, I will be using gender neutral pronouns for Kino.  I do apologize if you are not used to the non-binary pronouns of they, them and theirs; it may seem a little confusing, but it is an important concept to grasp to validate someone’s identity.

In the first episode, titled “Land of Visible Pain,” Kino comes across a town where there appears to be no people.  Hermes says to Kino, “We should take up residence here for a while, you could rule this place” they reply with, “I’m not the kingly type”.  This scene was probably the start of our belief that Kino was male.  It’s the first gendered statement of the show, and it comes directly from Kino.  But now looking back on it, I think it is a bit more telling, as Kino says this themself.  If Kino identified as female, I would presume they would have said, “I’m not the queenly type.”  I also find it interesting that this comment is pretty much the same in both the dubbed version and the subbed version.

The second episode, “The Story of Man Eating,” we see the first feminine aspects of Kino.  They’re given a ring for saving some men on the road.  That Hermes asks them, “Are you going to sell that ring, or what?” they reply with, “What do you think?” and stick their hand out of the tent.  The hand is drawn very narrow and feminine.  Hermes replies with “It’s not you” and Kino says “I don’t think so either”, but sounds a little disappointed in this.  This rings a little familiar with me.  Before my wife knew I crossdressed, at Christmas, she would show me a shirt or article of clothing my mother bought her and say, “Well you don’t really care.”  I would instantly be disappointed, because I really did care;  I was thinking about how I might look in it.

In the fourth episode, “Land of Adults,” the story is told from a girl’s point of view, whose name we only know is that of a flower.  A traveler, named Kino, comes to her town.  After some information is gathered it appears this is many years after the previous episodes, and Kino is an adult male.  Kino befriends a little girl, and she helps him build a motorad, which he names after one he had many years ago, Hermes.  The little girl is about to turn 12, at which point she will be taken off and become an adult.  We get the impression this is not a good thing, it appears to be similar to having a lobotomy.  On the day she is turns 12, she asks her parents if there is “another way to become an adult, just being myself?”  This causes the village to turn. The girl’s parents tell her “you are defective,” and Kino gets killed instead.  Hermes talks to the little girl and asks, “If you stay here, you’re going to die right?”  She replies with, “I guess it’s better than becoming like them.”  This is the point we realize this is the Kino we know.  They ride out of town on Hermes, breaking through the gate, and possibly through their confinement of gender.  When Hermes asks their name, they reply with, “I am Kino.”

One of my favorite scenes for this argument is in the sixth episode, “Coliseum: part 1.”  The guards of this country call Kino, “little boy”.  They reply with, “Please don’t call me ‘little boy’, my name is Kino.”  The guard then calls them “little Kino.”  Kino shoots the guard and says, “I said don’t call me little.”  I felt this was brilliant, displaying the fact that Kino didn’t mind being called boy, but instead “little” was the offensive word.  The guards then call them “Mr. Kino,” which Kino has no problem with.  As Kino fights gladiators in the arena, one calls them “missy,” to which Kino says, “Don’t call me missy, it’s embarrassing.”  I wonder, who is it embarrassing to? 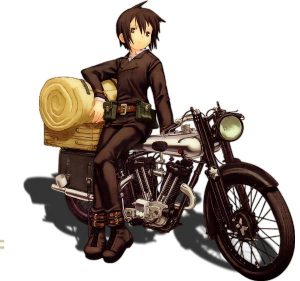 Episodes eight (“Land of Wizards”) and ten (“The Story of Mechanical Dolls”) both center around strong smart women.  Despite not really being related to Kino’s gender, I thought it was important to not skip over these two figures.  In “Land of Wizards,” Nimya wants to build a flying machine.  Her husband just wants her to be a “regular wife.”  Kino helps her successfully build her flying machine and successfully test it.  In “The Story of Mechanical Dolls,” we are led to believe that this family has a nanny who is mechanical.  In the end we find out that the nanny is really the scientist who created the family, and they have lived out their lives making sure she remained happy, believing herself to be the doll.  It was nice to see two women scientists portrayed in these episodes.  It’s a nice change of pace from typical media.

In episode eleven, “Her Journey,” they come across a house where they have been told an old man lives.  When the door is answered by a girl, they ask if she is the wise man.  I felt this scene focuses on the idea of the “wise man” really just being “wise person.” Kino doesn’t care if the person is male or female, just that they are wise.

There are still quite a few other stories in the series and I suggest you check it out.  I think there are quite a few interesting ideas about gender throughout the show.  Kino is referred to as both male and female, and doesn’t seem to be affected by either label.  Does that mean they’re non-binary?  I’d like to think so, but take a look and decide for yourself.