Warning: count(): Parameter must be an array or an object that implements Countable in /homepages/45/d96662078/htdocs/clickandbuilds/TheBackseatDriverReviews/wp-includes/post-template.php on line 316
↓
Home→Gender→Raging Beast: Domestic Violence in The Office (U.S.)

Confession: I got into U.S. version of The Office waaaaay later than I probably should have gotten into it. It’s funny, but it took halfway through the second season to really start getting the groove of it; Michael Scott (Steve Carell) would have been fired by the end of the first episode if it had happened now, so you have to take the show with a grain of salt if watching now. One thing I can’t fault Michael for, however, is the storyline involving his relationship with Jan (Melora Hardin). In a rare move for entertainment, The Office takes the time to craft a pretty spot-on portrait of domestic abuse, and one that crosses typical gender stereotypes. 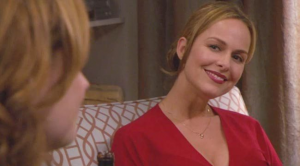 Michael and Jan start out as an unlikely office romance: he’s the goofball loose cannon that she must rein in; he obviously chases her a bit more than he should; Jan, in loneliness, turns to him; hilarity ensues. Michael accidentally sends a semi-nude image of her to colleagues and makes dorky social faux pas; Jan appears embarrassed that she’s publicly dating him. Then we get hit with the big gun: Michael confesses, during an outing with the female office staff, that Jan engages in bondage play and ignores their safety word while recording their sex sessions and reviewing the footage with a therapist. He’s clearly ashamed of this aspect of his treatment, and is told by the horrified women that this behavior isn’t normal; he subsequently breaks up with Jan. However, their breakup is short-lived, and he takes her back when she proudly displays new breast implants. 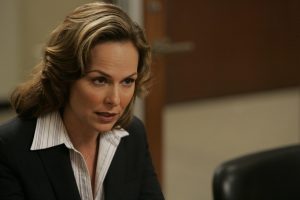 Flames… on the side of my face…

At the tail end of season 3, we find out that Jan’s being replaced, and the reasoning is pretty jarring for us: she’s inattentive to her job, she shops online, she drives up to Scranton unnecessarily, and she is more focused on her new breast implants than anything else. The put-together version we’ve seen of Jan is actually an illusion, and she’s about to lose her job. In a show of support, Michael has her move in with him at the start of season 4, and the glimpses we see of Jan in that season that are far more unhinged than the behavior to which we’re accustomed. She sleeps in, doesn’t work, and convinces her partner to buy a car outside of his salary while maintaining her lavish lifestyle. While we watch her get back on her feet, we’re confronting more alarming behavior toward Michael and others. She makes sniping, possessive comments to Pam (Jenna Fischer) to keep her mitts off him. She crashes the office and demands copies be made for her startup business, despite that she doesn’t work at Dunder-Mifflin. She asks Michael to lie for her during a deposition for a wrongful termination suit, during which he is publicly humiliated upon her sharing his personal diary and reading the contents of a scathing job performance evaluation she wrote for him. Michael starts working another job to support her lifestyle, and risks losing his gig at Dunder-Mifflin as a result. Everything comes to a head in the season 4 episode “Dinner Party,” wherein Jan throws an award Michael earned at his prized television set; the police are called, and Dwight (Rainn Wilson) lets Michael stay at his place because the police don’t think he’ll be safe with her at home. Oh, and she’s most likely cheated on him. That’s important to note too. 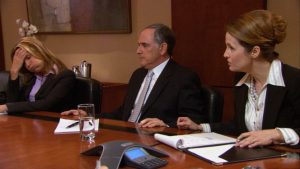 The escalation of Jan’s behavior is par for the course with an abuser. At first, she’s charming, mature and put-together: the Jan of season one is a total catch, albeit one that is super-professional to the point of being a bit icy. Once Michael gets her, she makes sure to let him know that she downgraded; she even references her therapist recommending she lower her expectations so that she can try a relationship, and phrases the advice in such a way that we’re left stung for the guy who just got told he’s benching above his weight. She makes snarky comments about him being embarrassing to her, and doesn’t want to fully acknowledge that they’re dating. She begins behaving erratically, and makes herself dependent upon him so that he can’t leave – after all, she’d be all alone, and nice guys don’t leave their partners during a low point, right? She violates his privacy in a bid to further her own financial interests. It’s strongly implied that she cheated on him with her much-younger assistant, and she confronts Pam concerning a perceived attraction to Michael. Then there’s the violation of safety words and abuse of sexual intimacy as control. Everything culminates with a physical argument, the breaking of possessions, threats, and a call to the police. Put it all together, and you have a textbook domestic abuser, from the charming onset to the coldly calculated control freak.

The astonishing aspect lies within the fact that the writers chose to make a blonde, slender businesswoman the abuser rather than someone much taller, physically imposing and male; it’s not Jim (John Krazinsky). Hell, they could have even picked Dwight, but they didn’t – they picked Jan, and in doing so, they struck a blow for the men out there that are getting abused and are too ashamed to speak up. The best part is that Michael is given a solid support system: rather than allowing him to slip into isolation, people show up to his dinner party; they tell him that his partner’s behavior isn’t normal; they rehearse lines to help him make a break; they give him a place to stay so that he’s safe. And when he goes back to her after an initial break – and there’s a definite make up/break up cycle with domestic abuse wherein the victim keeps returning to the abuser – no one berates him as stupid. They’re there for him. No one says, “I told you so” – they say, “You can stay with me tonight.” And that’s pretty powerful stuff from a goofball improv comedy, because it normalizes victim support systems and gives a positive face to male victims of domestic abuse by telling them that someone’s got their backs. Michael isn’t the butt of a joke – no one rips on him for getting pushed around by a girl. What they do express is concern that he’s in an unhealthy relationship. If that message is good enough for our women, it’s good enough for our men too. 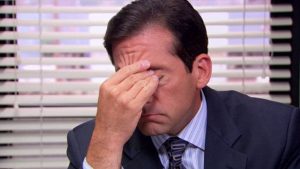 We’ve got your back, dude.

If you’re currently involved in an abusive relationship, there is help out there. The National Domestic Violence Hotline and Healthy Place offer resources for coping and escaping domestic violence. Know that there are people who care, and just want to see you well. You’re not alone.