Warning: count(): Parameter must be an array or an object that implements Countable in /homepages/45/d96662078/htdocs/clickandbuilds/TheBackseatDriverReviews/wp-includes/post-template.php on line 316
↓
Home→Comedy→Weekend Movies: Five Reasons to Watch Showgirls (1995)

I want a vacation. I figured I may as well go big since this is the time of year when the final throes of summer come into play. Let’s go for something big… something flashy… something splashy. Something that tells the story of a scrappy girl named Nomi (Elizabeth Berkley) just trying to make her dreams come true in a wild, glitzy city filled with sex, drugs and fierce dance moves. We’re going big, kids. It’s time for five reasons you should watch Showgirls (1995) this weekend. 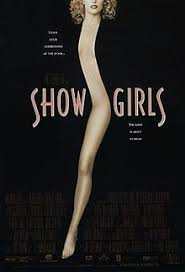 Berkley was fresh off of Saved By the Bell (for a refresher, visit the marvelous series Zack Morris is Trash). Berkley wanted to take on a more adult role after playing smart, sensible goody-goody Jessie Spano for most of her youth; I can’t fault her for that. Berkley went deluxe and took on the role of hooker turned stripper turned Vegas showgirl Nomi. She doesn’t just chew scenery – she jumps it and asks it where the fuck her money is and when she’s going to get it (she breaks a few fingers for good measure). And I fucking love her for this. Sure, Kyle MacLachlan is over-the-top as the scummy producer and Gina Gershon is simply delicious as the star to beat, but Berkley is the mob enforcer of this show. I could not be happier with her performance.

The first five years of the 1990s were kind of like an out-of-body experience as far as decades go. Sure, we had exited the 80s, but we weren’t quite ready to let go. We knew that the O-zone layer had a hole, so we switched to tons of mousse to achieve big hair rather than straight-up Aquanet. Ditto the fashion, as we weren’t quite ready to leave behind the stretch pants and the glitter. And so this movie (I still can’t quite bring myself to call it a “film”) follows suit. For a movie that takes place right around the time that Grunge was busy telling Ticketmaster to fucking shove it, it skips over the gloominess and flannel in favor of huge hairstyles, tons of makeup, and shiny, happy excess. Okay, maybe not entirely happy. But it was shiny. 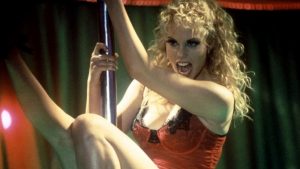 Someone once suggested pole dancing to me as a way to keep in shape. If by “in shape” they meant the sweet splendor of a full body cast once everyone’s favorite klutz tripped on her own two feet and went flying into the ceiling fan (I’m talented), then sure. Naturally, I envy anyone’s dance moves. And if they don’t have dance moves, I envy the chutzpah some possess to just go for it. Everyone in this movie is either in sync or dances like no one is watching. I’m sure the Irish proverb is proud.

#4 – It has some kind of real moments

You know, for a cheese fest, this film has some really, well, real moments. Nomi grew up on the streets and as such, she’ll fucking cut you – if you grew up with that girl, you know that she means it. Then there’s the whole Molly (Gina Ravera) thing. I won’t spoil it here, but if that isn’t relevant in the Age of Weinstein, I don’t know what is. It’s a bit surprising to watch this movie and see the impact of poverty, drugs, fame, and the lengths blackmail will drive someone to traverse. Color my jaded self impressed.

I love you too.

This one scene is reason enough to watch this film. I’m torn between wondering if Nomi is having a seizure or if it’s some weird dance thing. I mean, so many questions: how many takes did it require? Was there a harness involved? Did she ever choke on water? What kind of prep did MacLachlan have to undergo? Was there a course these two had to take on how not to flinch during imminent physical attack? How does one direct a scene like that, Paul Verhoeven? IS THERE A BLOOPER REEL? I need to know these things.

If you don’t own this – or have never seen it – just go out and buy it. Even if you’re only saving it for a lonely night with the mute button on your remote, a bottle of lotion and a stack of tissues.