Warning: count(): Parameter must be an array or an object that implements Countable in /homepages/45/d96662078/htdocs/clickandbuilds/TheBackseatDriverReviews/wp-includes/post-template.php on line 316
↓
Home→Action→The Almighty Sidekick: The Real Hero of Big Trouble in Little China

John Carpenter’s cult classic, 1986’s Big Trouble in Little China, is revered in many a social circle, and with good reason: it’s memorable as hell. Infinitely quotable, killer soundtrack, and the best damn boots sported by a man since who remembers when. Most folks immediately point to Kurt Russell’s Jack Burton – the infamous blowhard with the knack for one-liners and macho authority – as the main character of this tale of mysticism and action, but not so fast! While Russell’s Jack certainly fits the bill as the dreamy, funny action hero, it’s actually Dennis Dun’s Wang Chi who’s the real hero of the story. 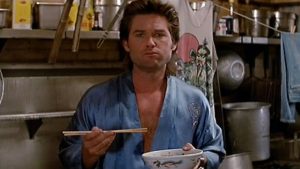 “You mean this isn’t about me?”

When we first meet Jack, he’s the typical outsider: he’s gambling in Chinatown with his old buddy Wang, the white guy with the trucker hat in the middle of a Chinatown marketplace. Once we get to the debt owed by Wang, we join them en route to pick up his beloved childhood sweetheart, Miao Yin (Suzee Pai). When Jack sees the Lords of Death attempt to abduct fresh-off-the-plane immigrant Tara (Min Luong) for sex slavery, he intervenes. Pretty heroic, right? The problem is that Jack is still drunk – as evidenced by his shoot down from Gracie (Kim Cattrall) – and the gang kidnaps Miao Yin instead (sidenote: these are horrible options for any woman). This sets into motion the quest to go find Wang’s beloved, saving the earth from the reign of a demonic figure and restoring the balance of nature. Along the way, he spouts one-liners galore, ranging from, “If we’re not back by dawn, call the president” to “I was born ready.” He also talks a lot more than he can handle: he routinely looks out of his element (like  when he first shoots someone) and more than once misses the action of a battle whilst either fiddling with his weapons or accidentally knocking himself out after busting a cap at Lo Pan’s wedding ceremony. We laugh at him; he’s memorable comic relief that can provide enough distraction from the gravity of Wang’s undertaking. 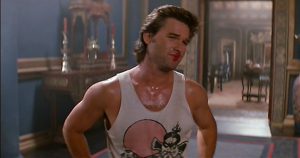 However, it’s worth noting that Jack isn’t the locus of the plot: it’s Wang and his quest to save Miao Yin, in everything from characterization to culture. The moment she’s captured, Wang starts formulating how to get her back. After tracking the gang into an alleyway and narrowly escaping a violent gang war, they storm the Wing Kong Exchange, the operations center of a notorious businessman who also happens to double as an evil supernatural creature (author’s note: how fucking funny is James Hong when he chooses to do comedy?). Jack’s immediate thought when the pair are in a flooding elevator car is to abandon the endeavor and get a new truck; Wang replies, “But there’s only one Miao Yin!” Without Wang’s insistence, there’s our plot out the window right there – game over. In addition, Jack is ignorant of Chinese myth and requires constant explanation, in everything from the Three Storms to the different Chinese hells. While Jack is a bumbling smart ass who bites off more than he can talk his way out of, Wang remains calm, cool and collected, only showing signs of panic when the thought of never seeing his fiancée dawns upon him. Wang is the man with the plan, the one who can navigate the setting, the one with the cultural know-how and martial arts skills; Jack is the one that’s along for the ride, that makes us laugh when the dumbass is overpuffed with false confidence and knocks himself out. There’s a clear sidekick here, and it ain’t Wang.

You don’t get more badass than this pose.

Which brings us to a point that even Carpenter has confirmed in interviews: Jack is the sidekick. This is casual racism we don’t want to admit has been staring us in the face for the past 30 years: we expect Jack to be the lead because Jack is the white guy in a mainstream American movie. Carpenter added the introduction in the lawyer’s office after the studio complained that they didn’t understand why Jack wasn’t the hero. Carpenter is in on the joke and winking at us every time that Jack messes up or goes far too over the top. It’s Wang that’s skilled in combat, Wang that has the determination to get the girl, Wang that knows the myths and the tools to defeat the villain. Even Jack’s big win of killing Lo Pan must come as a bit of an accident: his reflexes kick in when a knife is thrown at his head, after he bungles his original throw. Jack can’t perform the task when he’s thinking about it – the death has to be a serendipitous act. And we cheer because the good guy defeats evil, not quite realizing during the first watch that Wang is really the driving force in this story. It’s sad that it takes a step back to realize this, because how cool is a story about a man who traverses the supernatural to rescue a woman he loves from the clutches of evil? I’m certainly more interested in what Wang has to say than Jack spouting tall tales over a CB radio into nowhere. Wang’s the hero here that never gave up; Jack’s the guy that’s along for the ride. 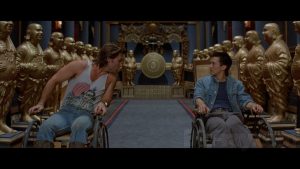 Hint: the guy on the right has the answers.

Which isn’t to say that being a sidekick is all bad. When Wang announces intention to barge into the Wing Kong Exchange, Jack immediately volunteers. For all his faults, Jack is loyal. Wang walks right into the Wing Kong Exchange headquarters knowing full well that there’s a chance he’s not going to come out of there; when given the chance to run, Jack ultimately sticks by him. Even if he screws up, even if he’s rendered unconscious, even if he’s scared or unsure of himself, Jack remains. And there’s a beauty in a loyal friend. Especially one that can provide smartass commentary.