Warning: count(): Parameter must be an array or an object that implements Countable in /homepages/45/d96662078/htdocs/clickandbuilds/TheBackseatDriverReviews/wp-includes/post-template.php on line 316
↓
Home→Comedy→Weekend Movies: Five Reasons to Watch Hello, My Name Is Doris

I had been meaning to sit down and watch 2016’s Hello, My Name is Doris. Written and directed by Michael Showalter, I had a feeling it would be a comedy in the same vein as The Baxter: equal parts heart and witty observation, with an underdog lead character that represents our collective frustrated experiences in the dating world. Showalter didn’t disappoint, with Sally Field as the shy leading lady. If you haven’t watched it, here are five reasons to do so this weekend. 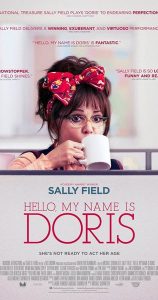 If you’ve worked in an office, you’ve met the office weirdo. In some instances of my life, it’s been me – in other cases, it’s been someone else. Sometimes, this person comes across as deeply strange and doesn’t fit in with the rest of the bunch, so this person is mocked for every tiny infraction of nonconformity, from a turn of phrasing to a haircut. This film gives some needed perspective on this situation, which I try to observe in my everyday life: give the person a chance. If they’re dangerous (and good Christ has there been one of those in the past), that’s one thing, but chances are, you’re going to find a person who brings something new to the table. Be open to it; there are a lot of good people that you miss out on by closing yourself off.

When we first meet Doris, she’s recently lost her mother. Doris was her mother’s primary care-giver, sacrificing relationships and career opportunities to care for her aging parent. Let’s be uncomfortably blunt: we live in an age where, instead of dying in their 70s, people are dying in their 90s. Who takes care of them? Their kids, who are getting up there themselves. Sometimes, they give up quite a bit to take care of their parents, including themselves. This is tough to watch, and it’s hard to help, as the child feels a sense of duty in taking care of the person who raised them. Watching Field’s Doris recover from that, as well as the way being the care-giver has impacted branching areas of her life, is a reminder that you don’t have to be alone.

This is what no break will get you.

Total honesty: I greatly dislike quite a few of the young actors out there. I cannot stand Miles Teller and Evan Peters. Selena Gomez is a huge “no thanks” from me. Don’t get me going on Emma Roberts. Where am I going with this? The younger crowd isn’t the only game in town, and this film proves that good cinema can come from a cast that happens to feature main characters that aren’t tight 25-year-olds. Field is perfectly compelling as a woman in her 60s who has a wild crush on her much-younger coworker. Tyne Daly is great as Doris’s feisty sidekick Roz, who challenges snotty behavior in public and raises her teenage granddaughter. I want to see more stories like this, because this generation isn’t boring. It’s nice to see a film where a woman in her 60s isn’t the sage dispensing advice, but the growing, warm heroine for which we’re rooting.

Okay, some of the hipsters in this movie are a bit pill-like (her colleagues are really kind of shallow), but others that Doris encounters are not. There’s one scene in particular where Doris clearly doesn’t fit in, and the younger folks around her try to make her more at home. They talk about her interests, tell her about themselves, and include her in their merriment. None of this is done as a joke, which, sadly, some people would do to make fun of someone later. As much as people like to shit on Millennials, they can be a rather open, fuzzy bunch. For every hipster that rolls his eyes at your lack of organic produce knowledge, there’s at least three that sees a person in front of them and wants to make sure that they feel included too. Why not focus on this aspect of the generation for once? 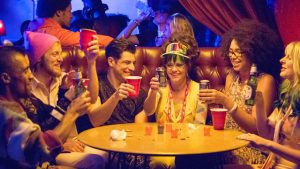 We all have at least one friend who can be employed by the goddamned NSA. One person who can have someone’s credentials, email address, favorite things and childhood playground history in no time flat. It’s an art form which I do not possess. I know a few people that are wicked good at this, and it continually baffles and amuses me. So when Doris enlists Roz’s 13-year-old granddaughter Vivian (Isabella Acres) to help find information on her crush, there were a few friends that immediately floated into my head. You will get this same feeling. It’s fun.

Hello, My Name Is Doris is currently available on Amazon Prime.