Warning: count(): Parameter must be an array or an object that implements Countable in /homepages/45/d96662078/htdocs/clickandbuilds/TheBackseatDriverReviews/wp-includes/post-template.php on line 316
↓
Home→Gender→The Future Is Female: Masculine Incompetence in The Last Jedi

**WARNING: SPOILERS AHEAD. WE TRIED TO BE NICE AND WAIT A FEW WEEKS**

There is no order taller some days than pleasing a Star Wars fan. Frequently, I hear the same complaint about The Force Awakens: it was a rehash of A New Hope, only with a (gasp) girl and a black guy as the leads. Personally, I’m willing to give The Force Awakens a pass because, well, we were coming off of fucking Jar Jar addressing the Senate and Hayden Christensen trying his best to act like he actually belonged at the big kids’ table at Christmas dinner. We needed something, but today is not the day to talk about why that one’s not a bad film – you’re here for The Last Jedi. And woooooo boy is this one causing some angry reactions. We saw heroes miss the mark and fail, we watched beloved heroes act like human beings with angry reactions, and we witnessed some pretty scathing social commentary concerning the wealthy exploiting the war machine in the quest for more money. What’s most prominent for me is the way that The Last Jedi addressed the growth of female power in sharp contrast with the incompetent men of the Star Wars universe.

Let’s start with the boys. We’ve got General Hux (Domhnall Gleeson), who totally downplays the fact that he gets prank called and then spanked during what’s supposed to be a well-executed military maneuver against a much smaller, much less sophisticated fleet. By all means, Hux should have gone in and crushed the rebels without much effort. Hux gets his ass walloped pretty publicly and make no mistake: he’s embarrassed by this failure. He gets the chance to smooth everything over once his boss realizes that there’s a backup plan: the rebel fleet can be tracked through hyperspace, muwahahah. Let’s not overlook something crucial though: Hux screwed up when his task really wasn’t that fucking hard given his resources, and he shouldn’t need this type of tracking technology because he should have done his goddamned job right the first time around. Also unable to get the job right? Poe Dameron (Oscar Isaac). Yes, Poe’s a hero and a bit of a bad boy and he’s played by Oscar Isaac – we can and should like Poe because he’s the pretty dashing pilot, proving that not much has changed since we idolized WWII pilots. But take a step back and really look at what Poe does, not what he spouts verbally about the cause and opportunity: Poe disobeys an order from Leia (Carrie Fisher) and gets a ton of rebel resources killed. Why? Because Poe wanted to do what Poe thought was best, other input be damned. He then talks Finn (John Boyega) into an extremely tough mission in order to find a master codebreaker in order to disable the tracking device being used by the First Order. The problem: Finn screws up and doesn’t get to the guy he’s after (I see you, Justin Theroux. I see you and your emoting eyebrow to the ends of the fucking universe.), and winds up bumping into DJ (Benecio del Toro), who’s pretty open and honest about the fact that people fuck each other over in the name of money over morality all the damn time. Finn’s got to have it proven that this guy has the skills, but he does not heed the warning of DJ: he’ll turn on you for a dime. This stupidity leads to Finn getting out-bid for DJ’s services. And don’t even get me started on Kylo Ren, who ties with his whiny uncle and grandfather for the prize of Poutiest Underachiever in the Galaxy.

So what we have left is the crew that manages to get the job done without having to scream, “I’m the rightest right in the galaxy!” and surprise, they’re all fucking female. Leia demotes Poe after he disobeys orders and gets people killed, thumping down on this hot shot’s head that there’s a badder bitch that’s seen way more and knows better. Leia also manages to keep subtle plans for survival under wraps with Vice Admiral Holdo (Laura Dern), who seems passive at first but turns out is a complete lion when it comes to the lives of the people she’s been charged with overseeing. And really, looking at Holdo, can we take a moment to appreciate the woman’s pokerface? She played the situation with extreme calm, never once betraying that there was a plan that was going to save lives. She operated on trust, intelligence and collected demeanor. That is the person you want in charge during a crisis, and when it came down to it, she made damn sure that her people survived by driving into a fucking First Order spaceship at lightspeed. Also badass? Rose (Kelly Marie Tran), who functioned as both the conscience and the technical know-how in the name of a successful mission. It takes a lot to be filled with wonder during a crisis, and her ability to find beauty in nature during a dangerous fool’s errand is to be commended – it means that she reminds us of what it’s like to be human and innocent in a time of great hardship. And while we could say that Rey (Daisy Ridley) exhibits much of that wonder and soul-searching, she takes risks and asks others to join her, proving leadership when Luke (Mark Hamill) and Kylo Ren refuse to take up the mantles of self-reflection and action. Speaking of action – holy crap, Captain Phasma (Gwendoline Christie). Her comments that she’s going to kill Finn and Rose slowly and it’s going to hurt… I believe her with that performance, and it’s solely a voice performance at that. There’s no dirty look – it’s all tone body language. Purely from this tone of voice, I would not want my dog to shit on this woman’s lawn. She’s scary and she’ll totally look me in the eye while she kills everything I love. Hux certainly didn’t elicit that same fear reaction from me, and Snoke didn’t have that menacing demeanor that she did. Phasma did her job and didn’t even need to show you her angry face. 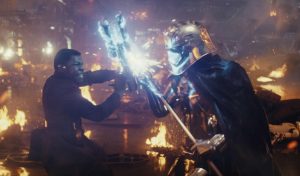 Why was Phasma not given more screen time? I WANT MORE PHASMA.

So where does this leave us? Let’s just come out and say it: the men in this movie did as they pleased and pouted when they did not get their desired results, whereas the women followed through with intelligence and control. Kylo covered his own ass while explaining the dead Supreme Leader Snoke on the floor because his plans for universal domination got rejected by Rey. Hux got chewed out in front of his subordinates for completely fucking up an easy job (you had one job, Hux). Finn rolled his eyes at the possibility of DJ being a master codebreaker, then placed blind trust in someone who handed how he operates to him on a silver platter – the betrayal was in plain sight, but Finn didn’t want to critically think about the risks of trusting someone whose loyalty could be bought. Poe pitched indignant hissy fit after indignant hissy fit because he truly believed he knew better than the women who ranked far above him. That’s the one that hurts the most: we had to watch someone who was daring and passionate disregard the word of his superiors – both respected women with a ton of experience – because his opinion meant more than their knowledge and careful planning; for any woman in the workplace, that’s like being visited by the Ghosts of Meetings Past and Present. Finn was ready to kill himself rather than take a moment to think about a better way to disable the First Order. All examples point to reactionary thinking and a greater focus on the need to be right than cooperation and analysis. The women consistently prove that they’re more level-headed and therefore better leaders – they’re not so far up their own asses that they’re giving themselves dental exams. Their plans are considered, educated and carried out with calm while getting the job done correctly. 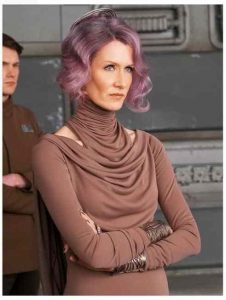 The face of every badass bitch who worked her ass off for that promotion.

Look, I’m going to level with you: we need this exact gender dynamic right now. We live in an age where women are starting to push back more and more so that their voices are heard. It’s an uncomfortable spot for some because they haven’t had to endure the types of indignities associated with being told that you don’t belong at the table as anything more than something pretty; some can’t admit that the feeling experienced is a bit of guilt. Yes, the fellas make for some entertaining storytelling, but it’s nice to see some real-world consequences here: these guys take big risks and they don’t always pay off. You don’t always get to save the day; sometimes, your gamble can and will hurt someone else, and you’ll look like shit because you didn’t listen to people who knew better. This is true with any gender: sometimes, your train of thinking is not only incorrect, but reckless and dangerous. People die as a result of these men playing the I Know Better game. It’s a dose of reality that sometimes, the best course of action is to listen – actively listen – to those around you even if you disagree with what they have to say initially. Greater knowledge leads to better decision making, and sometimes, your actions don’t make you a hero – sometimes, it just makes you the jackass that shut everyone else’s views out to nurse an ego. And in the case of The Last Jedi, those with the knowledge and calm course of action just happen to be women. The film certainly made this one a contest, and it’s not one the boys won.