Warning: count(): Parameter must be an array or an object that implements Countable in /homepages/45/d96662078/htdocs/clickandbuilds/TheBackseatDriverReviews/wp-includes/post-template.php on line 316
↓
Home→Documentary→Weekend Movies: Five Reasons to Watch The Farthest: Voyager in Space

I am a sucker for astronomy. The universe is large and beautiful, and we are so tiny. We’re little specks of stardust that walk around thinking we’re so important when our own planet is made miniscule when placed into scale with Betelgeuse. The best part: there’s still so much to learn, and we are just scratching the surface of it all. For me, it’s hard to stay mad at the world when I think to myself all of the amazing things we have yet to discover. Bearing that in mind, Emer Reynolds is back with another fantastic documentary. This one – The Farthest: Voyager in Space – focuses on the Voyager missions that have been collecting data for decades, with a heavy emphasis on the joy, science and achievements of the scientists and researchers who helped develop it, implement it, watch it and stand in awe of it. Here are five reasons to watch it this weekend.

#1 – More than the Golden Record

The infamous Golden Record was created and launched with the Voyager mission in 1977. The goal of this artifact: essentially function as a preview of life on earth. It took who we are – how we operate, what we like, our different cultures and animals and lives – and compiled this information in order to give an extraterrestrial life form an idea of what’s on Earth. It’s a big deal, but it’s not all about this record, which is often the focus of this mission. The documentary chooses to highlight the wicked cool science behind the mission, from structure to fuel to monitoring after launch. It’s not all showy like the record, but it’s really engrossing and places some of the emphasis back onto the technical achievements of the mission. That’s wonderful right there, because the science deserves so much attention – not just the culture.

This may seem like an odd reason, but hear me out. Nick is the son of Carl, and it’s his voice as a little boy that greets the extraterrestrials: “Hello from the children of planet Earth.” It’s iconic. On top of that, there’s a personal reason: that same little boy grew up to write one of the two books I call my favorite: Idlewild, which has a storyline about a viral holocaust. I say this to just about every person I meet: you have to read this book. Especially now that the National Institutes of Health decided that we don’t need a ban on creating lethal viruses. Seriously, read this book and then go run yourself a shower so that you can cry over the fact that someone wrote an intelligent take on this scenario back in 2003, and we’re one step closer to everything he outlined. Excuse me while I go drink. 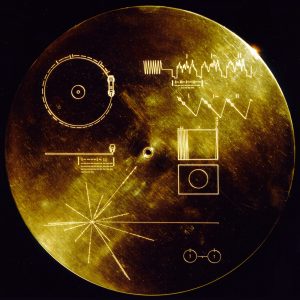 We hear so many stories about female scientists getting completely screwed in terms of their contributions and discoveries throughout history (if I start naming them here, I’m just going to spiral). This documentary manages to include the women that made discoveries and advances without making it sound like they’re sticking it to the man just to prove a point (despite that it’s warranted). It’s a pure presentation of fact, which is often the best way to present something (unless if it’s candy – then you scream for all you’re worth). Case in point: I am tickled to death that Linda Morabito’s discovery of volcanic activity on Io was included. I can smile and do a happy dance because Io is just… well, you’re about to find out in a minute.

Jupiter’s moons rock the fucking house. Hands down. Io is my favorite. I heard it described, as a child, as “the world turning itself inside out” and found that to be strangely beautiful. Jupiter has some cool moons that the documentary gets into. I won’t spoil the profiles here; just watch it and allow yourself to revel in the fact that even the moons of our solar system are something that will take your breath away. 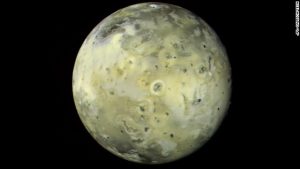 The Farthest: Voyager in Space is available for streaming on Netflix.