Warning: count(): Parameter must be an array or an object that implements Countable in /homepages/45/d96662078/htdocs/clickandbuilds/TheBackseatDriverReviews/wp-includes/post-template.php on line 316
↓
Home→Real→The Greater Good: Altruism in Sunshine

Danny Boyle’s Sunshine is a stark reminder to us that at the end of the day, we’re moving ever-closer to being completely fucked. Between global warming, the lack of clean drinking water (I’m still looking at you, Nestle), and the cancelling out Native American treaties in the quest for oil (we support Standing Rock here at The Backseat Driver Reviews), our world just keeps going further and further down the tubes. Right when you think you’ve hit rock bottom, some asshole hands you a shovel. Next thing you know, we’ll be right at the situation that Boyle’s Sunshine provides us: an Earth that requires outside help in order to survive because the planet is dying. Given, in this film, it’s a dying sun that requires a nuclear reactor, but the thought remains the same: there very well may come a point when we need to have a conversation about who gets to go and sacrifice themselves so that the rest of the human race can go on living. That’s what we need to talk about today: how this film provides a look at all sides of this grave situation, and what this means for the rest of us as we gaze at our own internal abyss.

From the offset, Boyle lets us know that the situation is precarious, with humanity facing certain doom. The first words of the film are, “Our sun is dying. Mankind faces extinction.” Cillian Murphy’s Robert Capa then explains calmly that the first mission to restart the dying sun – Icarus I – failed, and now there is one hope left: Icarus II (side note: whose idea was it to give these two vessels the name of a Greek mythological figure that failed miserably? That’s like naming a yacht the Titanic – sure, everyone recognizes it, but it’s forever associated with colossal failure. You may as well name the damn thing the “S.S. Fuck It”.). And so this crew comes together and sets out with a nuclear weapon to try to kick start the sun, thereby saving humanity. The stakes are pretty high. 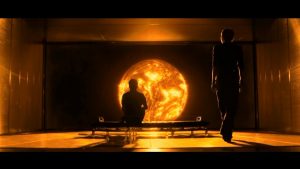 Some of them get the gravity of what they’re doing. Mace (Chris Evans, who I still have an extremely difficult time liking), the engineer, is the perfect definition of someone that understands the gravity of the situation. When we first meet him, Mace attacks Capa because he can’t send his package out, which is how he retains his humanity. “You took too long!” he screams, then concedes during a therapy session, “I know I fucked up. From now on, I’m not going to lose track again.” Searle (Cliff Curtis), the psychologist, prescribes two hours in a simulation environment to help ground Mace again, which works. In fact, this helps keep Mace’s eyes on the prize of completing the mission, as he argues against seeking out the Icarus I: “We’re delivering that payload because if it dies, we die.” Mace gets that life on Earth will cease to exist if the mission fails. Even Searle agrees with him at first when the great debate of helping Icarus I comes up: “Their lives are entirely expendable when seen in the context of our mission.” While Cassie (Rose Byrne) quietly cries at the fact that these people have been stranded and are sending out a distress call, Searle articulates that they should go to Icarus I not out of the goodness of their hearts, but to have a second payload in the event that the first one fails. It’s not the preservation of the surrounding, immediate lives; it’s about the larger picture. For this team, it’s the completion of the mission rather than the idea that they’re going to save everyone around them. Not everyone gets to live; someone has to die in order to make sure that the human race can continue. Capa and Cassie have blunt conversations about their survival chances: both recognize that they are going to die on this mission. Cassie is afraid of it, but Capa calmly accepts that his death will mean that others – including his sister and her children – will get to live based off of his sacrifice.

Not everyone realizes this though. In a moment that is achingly human, Boyle makes sure that we get flashes of the face of communications officer Harvey (Troy Garity), when communication towers three and four are lost. Harvey insists, “We don’t need ’em now, but we need ’em when we go home.” Cassie’s response to this is, “We’ll cross that bridge when we come to it,” which is his first glaring clue that they’re not going to be needed. Later on, Harvey wants to survive when the crew becomes trapped onboard the Icarus I, despite that Capa is clearly the most valuable personnel to the mission. Mace makes no mistake: Capa, as the physicist, needs to detonate the payload, making him the most valuable person. Capa gets the space suit because he is not only vital to the mission, but to the survival of the human race. Harvey, though, wants to pull rank and survive. It’s not a proud moment: he wants to live and return home more than he wants to save the human race. In that moment, everyone else is damned because of his instinct to preserve his own life. 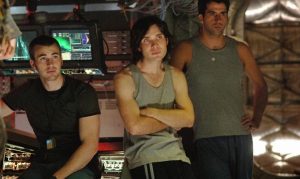 Stop me if you’ve heard this one: Captain America, the Scarecrow, and Barry Winchell walk into a bar…

The thing is, this isn’t exactly an out-there concept, yet it’s one that, as a society, we don’t want to acknowledge. We’re supposed to want to stay alive – it’s one of our instincts! And yet when it’s presented in Sunshine through the character Harvey, we’re left disliking the character. Why? Because it’s his mission. He’s one of the team that was selected to go and save the rest of us. Mace gets it: he recognizes the importance of the mission, what’s at stake, and who can complete it. However, Harvey is not prepared to hear that he’s “low priority.” And whether or not we want to admit it, we don’t want to hear that either. In this respect, Sunshine forces us to take a look into ourselves: would you have it in you to die so that the rest of the human race could continue? It’s the ultimate Messiah complex: would you sacrifice yourself to save others? While many of us want to believe that we’re Mace, those same people are loathe to admit that they can and would behave like Harvey. It’s not that Harvey is bad; he’s scared and wants to live. He wants what we all want. We can watch Kaneda (Hiroyuki Sanada) sacrifice his life to get Capa back onboard safely and admire it. We can hear Mace urge Capa to go on and detonate the payload to complete the mission. We watch Capa reach out and see the beauty in the reaction. But the question lingers – would we be a Capa, Mace or Kaneda, or would we be a Harvey?

The most interesting character then becomes Cassie, the one who admits her fears. She openly speaks of her nightmares of falling into the sun. She wants to save Trey (Benedict Wong) from his suicide. She cries at the suffering of others. However, she doesn’t delude herself: she knows the reality and must make peace with it because she has not choice. Therein lies the rub: maybe altruism isn’t a stark contrast between a Mace or a Harvey. Maybe it’s looking at the fear and making the decision to embrace it rather than run from it. It’s the ability to remain human – and the fears and nightmares it entails – while still doing something that helps out the group. In helping herself accept, Cassie demonstrates that she can help others. Sometimes, we need to help ourselves first.