Warning: count(): Parameter must be an array or an object that implements Countable in /homepages/45/d96662078/htdocs/clickandbuilds/TheBackseatDriverReviews/wp-includes/post-template.php on line 316
↓
Home→Science Fiction→Weekend Movies: Five Reasons to Watch Europa Report

Found footage films are a gamble, plain and simple. More often than not, they’re not worth your time because the team executing the film simply does not have the skill to make it fresh. However, every so often, you find one that works. 2013’s Europa Report offers a newer spin on found footage in that it tackles a space mission. It’s the story of a privately-funded crew that sets out to explore whether or not the moon Europa could sustain human life, and if there’s life already on it. Here are five reasons to watch it this weekend.

#1 – There are amazing moments of humanity

Often, we watch movies as a method of connection – we want to feel less alone, whether it’s seeing someone who behaves like us, or someone who is going through a situation that we’ve either experienced or are embroiled in at the moment. There are points of Europa Report where we can spot a really human moment and truly connect, whether it’s an ideal or a family dynamic. That alone is worth a watch in a weary world.

I like Embeth Davidtz, as well as Michael Nyqvist – both of them are excellent in anything they touch, from Army of Darkness to John Wick and beyond, respectively. I also have an unabashed fascination with Sharlto Copley, on whom I’ve cast a watchful eye (seriously, watch him in Hardcore Henry and tell me that there’s not something batshit wonderful lurking beneath the surface. I’m watching that one.). Additionally, Daniel Wu and Anamaria Marinca are good in this we well. The cast is more than able. 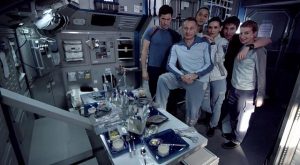 Smile big and pretty for the cameras.

#3 – The possibility of life on Europa

Europa is one of those moons that people watch with bated breath. I think it’s all the water – people want so desperately for it to be like Earth so that we can presumably go there and continue living long after we’ve wrecked our own planet. Maybe that’s a statement on the need to have an exit plan from the current mess we’re in. Maybe it’s the chance for a new beginning, a simpler time. Either way, it’s an exciting prospect, and with all eyes on this one particular moon, it’s a nice flight of fancy to think that someone could live there one day.

#4 –The future of space travel

Speaking of space, there’s a theme here that can’t be escaped: there are greater things out there in the universe. Some look to the skies and see proof of god; others see scientific possibility. I find it incredible that our future lies in getting out there and exploring our surroundings, whether it’s funded by the government or the private sector. Even more wild? The fact that our closest interstellar neighbors are light years away, necessitating a high tech solution to get there. The future is both near and far away. Mind blown. This is subtly worked into the film, giving you much to think about long after the last credit has rolled.

We should strive for the fantastic.

#5 – The beauty and coldness of space

The stars are pretty; no doubt about that. However, the reality of the mission is not forgotten in this film: there are stretches of boredom and missing your family that are undoubtedly crushing. This film does not sugar-coat the realities of space exploration – there’s a good chance that you could die painfully, never seeing your family again. There’s also moments of beauty that remind you why exploration is so important: there’s not only the need to survive and gain knowledge, but the need to feed the mind with the sheer beauty of discovery. Let’s not forget that as we look for solutions, be it a traffic jam or a new world.

This one is currently on Netflix. Give it a try and let your mind wander.