Warning: count(): Parameter must be an array or an object that implements Countable in /homepages/45/d96662078/htdocs/clickandbuilds/TheBackseatDriverReviews/wp-includes/post-template.php on line 316
↓
Home→Animated→The Joy of the Familiar: Routine in The Nightmare Before Christmas (1993)

Get ready to feel old: The Nightmare Before Christmas was released in 1993, which was 25 years ago. Babies born the year that it was released can now have staggering college debt and unfulfilling jobs. These kids can legally vote, own property (AHAHAHAHAHAHAHAHAHA *wipes tear*), and may have children of their own. In that time, director Henry Selick has gone on to direct James and the Giant Peach (1996), Moongirl (2005) and Coraline (2009), each with valuable lessons about appreciating the world around you. And it all started with the original: an animated film about Jack Skellington (voiced by Chris Sarandon), the Pumpkin King who grows bored and wants to try something new. 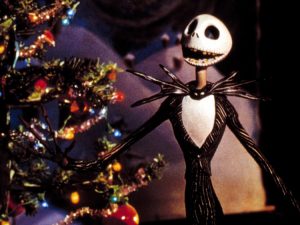 In the first ten minutes of the film, we’re treated to a marvelous display of the splendor of Halloween, complete with a toe-tapping theme song. The show is impressive: ghost floating in the air; well-timed pumpkins landing on spikes; the monster under the bed; creepy, dark homes; vampires and werewolves; Oogie Boogie’s shadow transforming into bats in flight. We see Jack enter, perform a rousing dance while on fire, and receive the adulation of the residents of Halloweentown. The whole thing functions like a well-oiled machine: everyone knows the words, everyone knows the steps, and everyone takes utter joy in what they do. Except, of course, Jack, who lets us know straight away that he’s losing the spirit. Throughout the film, Jack struggles with feelings of being stuck in a rut, wanting something more than the same old same old. We look at Jack’s handiwork and the prevalent pride displayed by the townsfolk and see a guy who’s got everything and is damn good at what he does, but Jack yearns for the new, which comes in the form of Christmas. 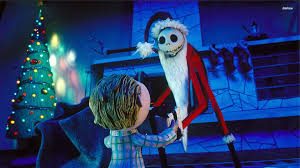 However, Jack keeps circling back to his main holiday of Halloween, which gets him into trouble. He goes on an all-encompassing quest to unlock the joys of Christmas, placing stock in the novelty of snow and presents, but fails to grasp the true spirit of giving joy rather than scares. He places severed heads in boxes, gives snakes as pets, and brings toys that spring to life and chase after the children for whom they’re intended. He puts all his passion into remaking Christmas by putting his own stamp on it, seeking to fundamentally remake the holiday into something closer to Halloween. The result: terror, havoc and a military mission to shoot him out of the sky to make it stop. 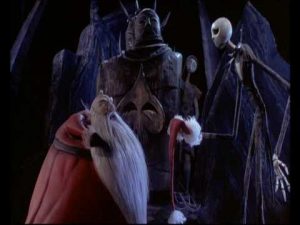 Jack’s big problem is that he’s not entirely looking for a new way of life – the guy just needs a vacation to recharge his batteries. The snow fascinates him, and gives him an angle that’s not entirely off: after all, how many horror films capitalize on the beautiful, calming winter setting to lull us into a false sense of security before the mayhem starts? Jack’s on to something there, but his execution isn’t right: he tries to absorb Christmas and make it his own without really stopping to study the customs and traditions of the rituals. His actions lean toward appropriation rather than appreciation, and that’s where he commits something every excited person is guilty of upon the discovery of something new to them and cool: taking it and trying to make it fit your life and schemas rather than researching the broader cultural background. That’s why we have a fear-based entity that unthinkingly places a severed head in a box: to him, that’s a present, rather than the context of the situation. It’s no surprise that Jack mucks it up: he’s essentially trying to fit a square peg into a round hole. While he can have elements of the holiday there, he really needs to become more familiar with it rather than just dive in – he needs to think about the traditions and their meanings unto themselves rather than blanketly performing a reboot on a massive holiday. Santa even delicately touches upon this when he tells Jack, “Next time you get the urge to take over someone else’s holiday, I’d listen to [Sally],” the one person who advised him to slow down and truly consider his actions and their consequences. 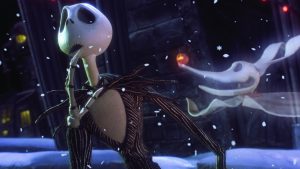 The fuck is this?

In the end, The Nightmare Before Christmas isn’t about making Christmas scary or a comedy of errors – it’s about finding ways to reinvigorate yourself and your routine in ways that are appropriate and respectful. The friendly greeting between Jack and Santa at the end of the film shows no ill will, as they’re both warm and cheerful. The insinuation is that both may visit one another occasionally, but each will do his best to maintain the spirit of his own holiday. While that may seem a bit separationist, consider this: when we share our traditions and histories with one another, we grow; it’s when we attempt to overpower and shoehorn new information into our own purposes without much thought that trouble begins.