Warning: count(): Parameter must be an array or an object that implements Countable in /homepages/45/d96662078/htdocs/clickandbuilds/TheBackseatDriverReviews/wp-includes/post-template.php on line 316
↓
Home→Comedy→Weekend Movies: Five Reasons to Watch The Ref (1994)

With the holiday season comes family gatherings, which means (gulp) social interactions. Some days, there is excitement to see your loved ones; other days, you know exactly why you stay away for the rest of the year. Such is the case with The Ref (1994), a film about a burglar named Gus (Denis Leary) who takes unhappy couple Lloyd (Kevin Spacey) and Caroline (Judy Davis) hostage in their home on Christmas Eve. Here are five reasons to watch it this weekend. 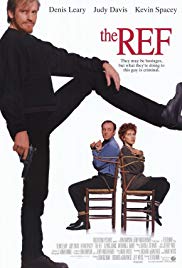 Man, I had forgotten that we had lost Ted Demme as long ago as we did. This is the guy who brought us Blow in 2001 and Beautiful Girls in 1996. We would have gotten more thinker fare if not for the fact that he passed away suddenly and unexpectedly in 2002 at the age of 38. He didn’t often venture into comedy, but when he did, we got darker fare like this. Ted, we hardly knew ye.

We all know them: that one couple you hope, pray and perform a ceremonial dance for in the hopes that they break up. They hate each other. They’re miserable and suck all the joy out of every room they enter. Ladies and gents, this is Lloyd and Caroline. While they’re entertaining to watch, they’re also a bit uncomfortable because they bear a resemblance to that couple that refuses to divorce for whatever reason. It’s a slice of reality that people try to gloss over in time for the holidays. I say bring the reality. Don’t try to frost over it and serve it like a gingerbread cookie from Satan’s bakery. 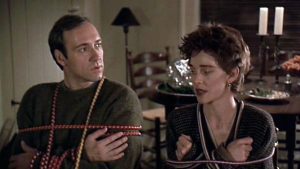 #3 – Denis Leary is the voice of reason

I love it when Leary is given a chance to drop truth bombs (see: “I’m An Asshole”). Watching him light into two people who are determined to make everyone else around them just as unhappy is pure delight. I could listen to him tell people to shut up all day. Especially this time of year. Can we get portable Denis Learys to keep with us during holiday shopping?

A good cast is only as good as their supporting parts. Sure, a solid actor can carry a film, but when there’s more than one person in on the relay race, it’s so much more enjoyable. This film boasts actors we love in fun parts: J.K. Simmons, Glynis Johns and Christine Baranski all take part in the festivities. The snark and annoyance they bring to the film are great, especially considering that Simmons has really hit his stride in the past few years. 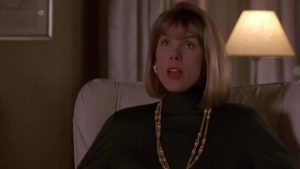 Personal confession: I liked dark humor in the past, but it wasn’t until I started dating Europeans that I really got to relish the experience. Let me tell you, the Scottish and the English are freaking BRUTAL. More exposure to it means that I get to let that flag fly. I can see why they go there, because it’s a bit of a release. Steering into the skid is definitely a good way to go sometimes; helps you cope with everything going on, especially if it’s uncomfortable.